It’s a pretty popular time for dinosaur novels, what with Victor Milán’s upcoming The Dinosaur Lords, and the biggest movie of the summer being Jurassic World. What many people don’t realize is that dinosaur stories weren’t created by the makers of Jurassic World. They weren’t even created by Steven Spielberg, director of Jurassic Park, way back in the last century in 1993. Believe it or not, they weren’t even created by Michael Crichton, the author of the original 1990 novel. Dinosaur novels were totally created by the science fiction novelist Keith Laumer, in his 1971 novel Dinosaur Beach.

Okay. After doing some, y’know, actual fact checking, it turns out Keith Laumer didn’t completely create the dinosaur novel. But it’s true enough for our purposes. Which are, to give us an excuse to talk about Dinosaur Beach. 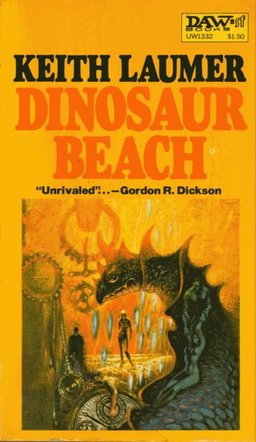 Keith Laumer was well know for his novels featuring Jame Retief, a diplomat in the Corps Diplomatique Terrestrienne, based on Laumer’s years as vice consul in Burma in the 1950s in the US Foreign Service, and for his popular Bolo short stories featuring superheavy A.I. tanks. Dinosaur Planet was a standalone novel originally published in hardcover by Charles Scribner’s Sons in 1971, and reprinted in paperback in 1972 by DAW with a cover by Kelly Freas. Its paperback publication history is as follows:

Here’s the book description from the 1975 DAW edition:

Appearing from the remote future, Nexx Central agent Ravel is emplaced in America, circa 1936. His mission: to undo successive tamperings of the time stream which threaten the survival of Mankind. He falls in love with a lovely, simple girl, Lisa, but in the midst of his happiness is called away to Dinosaur Beach.

Dinosaur Beach is a Nexx Central station located millions of years in the past, in the Jurassic Age. But shortly after Ravel’s arrival, the station is attacked and destroyed, and Ravel begins a terrifying odyssey through time.

For the attackers were another time-tampering team from still a different future era. And Ravel himself is not only in growing danger but the human world as we know it…

Dinosaur Beach is 151 pages in paperback. There is no digital edition, and it is currently out of print.

It occurs to me that I haven’t read any Laumer since probably high school — the public library had some of the Retief collections. This one really does sound right up my alley …

Baen Ebooks offers just about everything Laumer short of The Monitors and his Avengers novelizations…well worth having a look!

My tastes have wandered elsewhere over decades, but back in my college days Laumer was my favorite writer and Dinosaur Beach my favorite novel. Should refresh myself on it sometime soon…

I read this a few years ago and just loved it. It’s such an ingenious, fast-moving time travel story. Laumer wrote about a half dozen of the best pure “entertainment” SF books ever. (Worlds of the Imperium might be at the top of that heap.)

> This one really does sound right up my alley…

Copies are pretty easy to come by, if you’re interested. There are currently 19 copies available on eBay, starting at around $2.49.

And as Phubarrh mentions above (and I should have caught), it’s in the Baen omnibus collection Odyssey.

> back in my college days Laumer was my favorite writer and Dinosaur Beach my
> favorite novel. Should refresh myself on it sometime soon…

And here I thought I was rescuing a forgotten novel from obscurity. I should have known it still has a thriving fandom. Keith Laumer is still read today, and you’re right that Baen reprinted the bulk of his back catalog in handsome affordable editions.

Ah! I should have checked that. Thanks for letting me know. I note ODYSSEY is currently out of print, which is unfortunate. But still, it’s a great collection, and not to hard to find.

> I read this a few years ago and just loved it. It’s such an ingenious, fast-moving time travel story.

Thanks for the mini-review, Thomas! Maybe you’ll do a real review for us someday?

> Laumer wrote about a half dozen of the best pure “entertainment” SF books ever.
> (Worlds of the Imperium might be at the top of that heap.)

WORLDS OF THE IMPERIUM was the first Laumer book I ever bought. It (and his Retief books) are still cited today as a major influence, especially in science fiction gaming:

Keith is outstanding. I based a lot of my huge Robotech: Apocalypse campaign on his Retief & Bolo books 🙂

Excellent! I’ll have to either check out the Baen eBooks or wait until next time I’m at Uncle Hugo’s.

[…] this delivers. John O’Neill at BLACK GATE has some insightful comments about Dinosaur Beach here. GRADE: […]

One of my favorite Keith Laumer novels. I still have the Science Fiction Book Club hardcover edition. My other favorite “dinosaur” stories were featured in DC Comics’ “Star-Spangled War Stories,” I believe: “The War That Time Forgot.” WW II Marines in the Pacific battling dinosaurs and Japanese troops. I always wanted to write a modern-day screenplay version, involving time travel. Great article, John!

Love this book! It reminds me of Simak’s TIME AND AGAIN and Leiber’s Change War stories. And, now that I think of it, I might put Gerrold’s THE MAN WHO FOLDED HIMSELF alongside them.

The Baen collections of Laumer are full of really good stuff.

I still have my original 1975 DAW edition paperback. I was in college at the time and Dinosaur Beach was (and is) a personal favorite. I am not surprised that it is out of print, but quite dismayed that there is no e-book. I should contact the rights holder. I am an audiobook narrator and would LOVE to do this book!