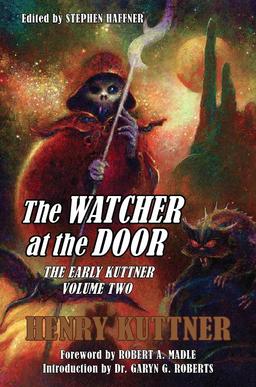 We’ve given a lot of space over to Stephen Haffner’s books here at Black Gate, and it’s for a very simple reason: no one else is doing the kind of superb work he is, bringing pulp authors back into print in gorgeous archival-quality hardcovers that are also within reach of the average collector.

Terror in the House, the first volume in The Early Kuttner, focusing on his weird-menace stories, was released in 2010. I dropped by Stephen’s booth at the Windy City Pulp and Paper show here in Chicago last week, hoping to find early copies of the highly anticipated second volume, The Watcher at the Door. No luck — but Stephen assures me it’s coming soon.

Henry Kuttner, alone and in collaboration with his wife, C.L. Moore, was one of the most talented and prolific writers of pulp SF and fantasy. The Early Kuttner gathers many of Kuttner’s earliest stories, most of which have never been reprinted. The series will run to three volumes.

The Watcher at the Door collects thirty stories published in a three year period between April 1937 and August 1940, in pulps such as Weird Tales, Thrilling Mystery, Strange Stories, Unknown, Thrilling Wonder Stories, and many others. The cover art is by Jon Arfstrom.

It was during this period that Kuttner married C.L. Moore, on June 7, 1940. They met in 1936, when Kuttner wrote her a fan letter. After their wedding, they wrote almost everything in collaboration, under their own names and under the joint pseudonyms C. H. Liddell, Lawrence O’Donnell, and (especially) Lewis Padgett, a combination of their mothers’ maiden names.

Before his marriage to (and subsequent collaborations with) Catherine L. Moore, Henry Kuttner was a frequent contributor to the pulp magazines that specialized in the weird, supernatural, horror, and science fiction genre. Beginning in 1936, with the minor classic “The Graveyard Rats,” Kuttner launched a steady stream of short stories aimed at Weird Tales, Strange Stories, Thrilling Mystery, and others.

Writing for Weird Tales brought Kuttner into direct correspondence with that magazine’s premier contributor. H. P. Lovecraft. Kuttner set several stories in Lovecraft’s “Cthulhu Mythos” and two are presented in The Watcher at the Door: “Hydra” and “The Hunt.”

At this point in his still-young career, Kuttner had cracked the science fiction market and was steadily publishing in Thrilling Wonder Stories, Fantastic Adventures, Science Fiction, and made his first sale to the new prestigious fantasy magazine, Unknown.

In the course of writing the stories collected in this volume, Kuttner married Catherine Lucille Moore on June 7, 1940 (in New York with artist Virgil Finlay as Best Man).

The Watcher at the Door is the second volume in a three-volume “Early Kuttner” set collecting many of Kuttner’s earliest stories, most of which have never been reprinted.

And we’ve covered the following recent releases from Haffner Press:

Murder Draws a Crowd: The Collected Fredric Brown, Volume One
The Best One-Sentence Reviews of Edmond Hamilton: The Winner of The Collected Edmond Hamilton, Volume Four
Gifts From the Godfather of Space Opera: The Collected Edmond Hamilton, Volume Four
The Best One-Sentence Reviews of Manly Wade Wellman: The Winners of The Complete John Thunstone Contest
The Complete John Thunstone, by Manly Wade Wellman
Tales From Super-Science Fiction, edited by Robert Silverberg
Henry Kuttner’s Thunder in the Void
More Haffner Goodness: Detour to Otherness
Terror in the House: The Early Kuttner, Volume One

The Watcher at the Door: The Early Kuttner, Volume Two will be published by Haffner Press; no firm publication date is available. It is 700 pages, priced at $45 in hardcover. There is no planned digital edition. The cover art is by Jon Arfstrom. Get more details at the Haffner website.

See all of our recent pulp coverage here.