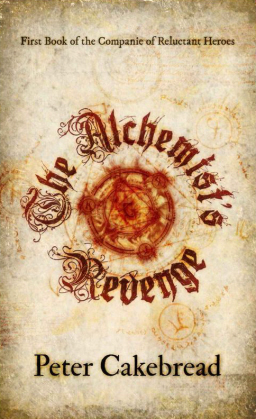 The most-read piece of fiction on the Black Gate blog last month was our exclusive excerpt from The Alchemist’s Revenge by Peter Cakebread, the first novel from the co-author of the role playing games Airship Pirates and Clockwork & Chivalry. The first volume in the Companie of Reluctant Heroes takes place in a 17th century that didn’t quite happen, in a nation torn apart by civil war.

When an embittered mercenary agrees to escort a grieving widow to visit her husband’s grave, little does he realize the dangers they will face. This is the story of their struggle through a country divided. As they journey through tainted lands, ravaged by alchemical magic and giant clockwork war machines, they are reunited with old friends and stalked by sinister foes. The reluctant heroes band together in this tale of loss and despair, of redemption and friendship, and ultimately, of retribution and revenge!

“Stand at Dubun-Geb,” Ryan Harvey’s second tale of Ahn-Tarqa, returned to the setting of “The Sorrowless Thief,” for another heroic fantasy packed with adventure, swordplay, and weird magic. It took second place this month.

Steven H Silver’s tale of the strange astral adventures of Hoggar the Cremator, “The Cremator’s Tale,” continued its run at the top of the charts, taking third place.

If you haven’t sampled the free adventure fantasy stories offered through our Black Gate Online Fiction line, you’re missing out. Here are the Top Twenty most-read stories in May.

The top fiction from April is here.