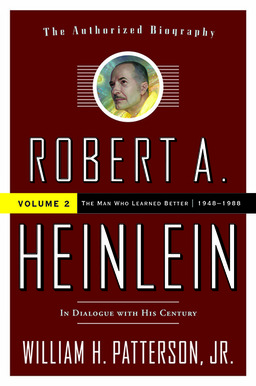 In 2003, I was on a panel on classic SF and fantasy with Charles N. Brown, the esteemed editor of Locus, when the conversation turned to Robert A. Heinlein (as it does).

I don’t know much about Heinlein, really. I read a small handful of his books when I was younger, but I was never really a fan. I was more an Asimov guy. Brown however, was a dedicated Heinlein reader, and when Heinlein died in 1988, Brown famously wrote that there had never really been “the Big Three SF writers,” (meaning Asimov, Clarke, and Heinlein.) There had only ever been Heinlein, towering over the field.

Heinlein’s first novel, For Us, The Living, written in 1939 but unpublished until 2003, would appear later that year. I had received an advance proof, but I hadn’t read it. Brown had, however, and the book was major news. The rest of us on the panel deferred to Charles as he smoothly warmed to his topic, lecturing the assembled crowd on the importance of the novel in Heinlein scholarship, and indeed, to literature itself.

“The thing to remember,” Charles said, “is that Heinlein never intended the novel to be published –”

Charles looked startled. He seemed to have forgotten that there was anyone else on the panel. He looked around, obviously annoyed at the interruption.

I hadn’t read For Us, The Living. But I had read the one-page release Scribner had sent with the book. It stated very clearly that Heinlein had sent the book to multiple publishers in 1939 and 1940, with no luck, and after some initial frustration he’d finally set it aside to try his luck with a second book.

The assembled crowd had no way to know that, however… at least, no one who hadn’t received an advance proof with that handy release, anyway. Brown was now staring at me, his mouth still open. So was the entire audience. 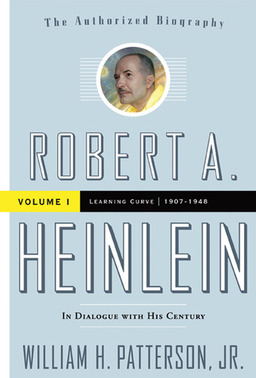 I leaned closer to the mic in front of me on the table. “He tried to sell the book right after he wrote it,” I said quietly. “To several publishers.”

By now, Brown had recovered his composure. He returned to the crowd, clearing his throat. “The thing to remember,” he said, his voice rising a little,  “is that Heinlein never intended the novel to be published.” Steadfastly ignoring me, he launched back into his lecture. I leaned back into my chair, properly chastened. I caught the eye of the SF pro next to me, who rolled his eyes.

That little episode nicely encapsulates all my encounters with the Heinlein-worshiping core of the SF field. They are steadfast in their adoration of Robert A. Heinlein, convinced of his rightful place as the beating heart of 20th Century science fiction, and they are entirely immune to facts.

Despite several attempts, I’ve been unable to finish a Robert A. Heinlein novel since the late 70s. The last one I tried was Friday, which I found to be an adolescent male fantasy. (And considering my usual fondness for adolescent male fantasy novels of all kinds, I consider the fact that I couldn’t finish that one to be pretty telling.)

Needless to say, I’m not really the target audience for Robert A. Heinlein: In Dialogue With His Century Volume 2: 1948 – 1988: The Man Who Learned Better. But that’s okay. As I’ve learned over the years, my opinion of Heinlein — and indeed, virtually all Heinlein criticism — is entirely superfluous to core Heinlein fandom.

Good for them. If there’s one thing I can respect, it’s a group of writers and fans banding together to champion and celebrate an author they ardently believe deserves more attention. I’m guilty of the same thing, seven days a week, right here at Black Gate (albeit with different subjects.) You go, Heinlein fandom. Blow your trumpet, and don’t let anyone try and shut you down.

Here’s the book description for Volume 2.

The real-life story of Robert A. Heinlein in the second volume (1948–1988) of the authorized biography by William H. Patterson Jr.

Robert A. Heinlein (1907–1988) is generally considered the greatest American science fiction author of the twentieth century. His most famous and widely influential works include the Future History series (stories and novels collected in The Past Through Tomorrow and continued in later novels), Starship Troopers, Stranger in a Strange Land, and The Moon is a Harsh Mistress — all published in the years covered by this volume. He was a friend of admirals, bestselling writers, and artists; became committed to defending the United States during the Cold War; and was on the advisory committee that helped Ronald Reagan create the Star Wars Strategic Defense Initiative in the 1980s.

Heinlein was also devoted to space flight and humanity’s future in space, and he was a commanding presence to all around him in his lifetime. Given his desire for privacy in the later decades of his life, the revelations in this biography make for riveting reading.

I have very mixed feeling about Heinlein. One the one hand, I adore his work. On the other hand, I loathe it. He was one of the writers (probably the main one) who seduced me into the genre when I was a kid, and seduced is the right word – his juveniles were what I read first, and the narrative voice of those books – Have Space Suit Will Travel, Red Planet, The Rolling Stones, The Star Beast, Tunnel In the Sky – is so unresistably beguiling, with its wisecracking, confidential tone, always making you looking up, never talking down. Those books were like letters from a best friend who lived in the future, messages from a believable, incredibly exciting, optimistic place – a place that you were going to get to live in, too. Even in those books, he liked a good lecture, but the preaching was kept on a leash; it never impeded the narrative momentum, never got in the way of a gripping story that you just had to finish.

The adult books of the 50’s (Double Star, The Door Into Summer, The Puppet Masters) are extremely entertaining, but by the 60’s the hectoring lectures started to overwhelm narrative drive, and the books thickened (or even curdled) and became (for me) unreadable. And the moral coarseness that was always present, even in his best work, began to predominate. He divided everyone into two groups: the competent, free-thinking, and ruthless, who have a right to do as they want, and the incompetent, conventional, and stupid, who deserve to go to the wall. It leaves a bad taste in your mouth, even as he generously assumes that you are one of the chosen ones – after all, you’re reading one of his books.

The thing is, his virtues and vices were so mixed – the conflict between his empathy and humanity on the one hand (best seen in some of the juveniles and in Double Star) and his brutality and solipistic selfishness on the other, gave his best work a real creative tension. When the balance lurched too far in the wrong direction, the result was just ugly – morally and aesthetically.

He was so often both right and wrong. His views on sexual mores and practices are a case in point. He would be completely unsurprised by marriage equality, and when group marriages are recognized – as they inevitably will be – he again wouldn’t bat an eye – he predicted these things when they were not a part of anyone else’s futures. At the same time, though, his view of sex as a weightless act with no more moral or social significance than brushing your teeth was sheer fantasy. His constant depictions of utterly frictionless sexual relationships make you wonder if he ever knew any actual men and women. (And sex in his books is so boring – he never understood that reducing sex to something that had no more weight than trimming your toenails meant that everytime he went on at length about sex, it was as engaging as reading eight pages about trimming your toenails.)

The last thing he wrote where the elements were in anything resembling balance was The Moon Is a Harsh Mistress, but when I go to the bookstore, it baffles and infuriates me to see that it’s the latter, bloated, ossified books that are mostly in print. People tell me they don’t like Heinlein and I ask what they’ve read (or tried to read) – The Number of the Beast! Oh my God! Judgements about writers should be formed based on their best work, and that’s hard to do if Barnes and Noble only stocks The Cat Who Walks Through Walls or To Sail Beyond the Sunset.

He has to be read, he has to be remembered and honored – but certainly not uncritically. There are books that I would under no circumstances part with – Citizen of the Galaxy, Farmer In the Sky, The Unpleasant Profession of Jonathan Hoag (as brilliant and terrifing as The Man Who Was Thursday), Double Star, and many more. In his prime, that voice carried all before it – sometimes even to the point of obscuring what he was actually saying. He’s a writer you can never drop your guard with; you always have to keep him in front of you. Infuriating, divisive, contentious, dangerous – I’m sure he’d like to be remembered that way.

A fine, fine analysis — almost a post in itself. I should have asked you to review this book. It’s yours if you want it. 🙂

I’ve never turned down a book in my life, and I’m not about to start now.

I love Heinlein, but I recognize that in his later books, characterization became, in essence, a dialogue with himself.

There are quite a few folks who rag on his views of women, but I tend to broaden that problem out: it’s not that he couldn’t write women, it’s that he stopped caring about writing *anyone* other than himself.

That said, I do love the views the various characters give us into Heinlein’s personality. Jubal Harshaw and Lazarus Long being my favorites of the not-so-secretly!Heinlein characters, with the latter feeling very much in the Mary Sue vein.

I do, rather guiltily, still love the Future History. He’s still a very good storyteller, in his way.

> There are quite a few folks who rag on his views of women, but I tend to broaden that problem out: it’s not that
> he couldn’t write women, it’s that he stopped caring about writing *anyone* other than himself.

Right on the money, I think. I wish I’d said that, and I may steal it!

> I do, rather guiltily, still love the Future History. He’s still a very good storyteller, in his way.

I should have clarified that, while I was never able to finish a Heinlein novel after about 1979, what kept me coming back was his short stories, which I found excellent. His mammoth collection THE PAST THROUGH TOMORROW is one of the monumental works of 20th century SF.

John, I agree with you regarding his short stories. RAH’s short stories are lost in the shadows cast by his novels. That is a shame. The collection “The Unpleasant Profession of Jonathan Hoag” is a treasure chest.

He could write a great story whenever he felt like it, but a lot of the time he felt like telling you about how he hated beatniks instead.

I don’t know much about Heinlein, but wasn’t his book Stranger in a Strange Land considered something of a hip book with the same crowd that loved reading the beatniks back in the 60s?