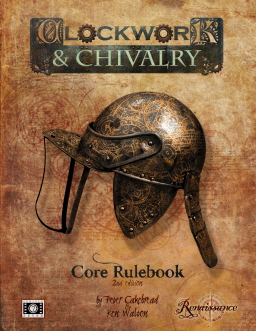 I’m Peter Cakebread. Along with my friend and co-writer, Ken Walton, I run a small company, Cakebread & Walton.

With a company name like that, it has been suggested that we could have been undertakers, or perhaps owned a quaint little coffee house, or even been nineteenth century grave robbers – “There are no Peelers out tonight, Mr Walton, so pass me the shovel, if you would be so kind.” Instead, we write tabletop RPGs (Role Playing Games), and fiction, although we are always looking to diversify, so keep the suggestions coming!

To date, our games are mostly published by Cubicle 7 (who also publish The One Ring and Doctor Who RPGs, alongside a host of other titles).

This time, I thought I’d chat about Clockwork & Chivalry, our clockpunk RPG set in an alternate Seventeenth Century.

But, Woah! Go back! Where did this idea come from? 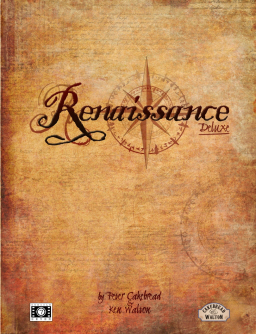 Well, Ken and I had just finished working on some fiction (a gentle Victorian pastiche), and we were considering what to write next. Ken had a few pages of fiction that he had last worked on years before. It was the seed of a cracking little story, set in the Clockwork & Chivalry world (although that “world” was pretty much at the embryonic stage at that point).

Ken had dabbled in the history of science (Dabbled? I have a degree in the History, Philosophy and Sociology of Science, I’ll have you know! — Ken), and in particular had studied the life of Sir Kenelm Digby, a fascinating seventeenth century renaissance man, and the inspiration for the hero in Ken’s fiction piece. What if, Ken asked, we wrote it as an RPG instead?

Just a few months later and with the support of Angus Abranson (who worked for Cubicle 7 at the time), the 1st edition of the game had been written (for Mongoose’s Runequest II system) and was on the shelves. Not very long after, a fully standalone 2nd edition (in all its hardback glory) was completed.

[For those who are wondering about game mechanics, the 2nd edition incorporates a D100 ruleset (the same mechanic used in RuneQuest, Warhammer FRP, BRP, etc.) which we wrote especially for the age of black powder – Renaissance RPG. Renaissance (and Renaissance Deluxe, a shinier expanded version) are specially designed and fully Open Gaming Licensed rules, adapted from Newt Newport’s excellent OpenQuest fantasy ruleset.]

Rather than go into details (there are plenty of reviews out there already), I thought I’d mention three things that I really like about the game. 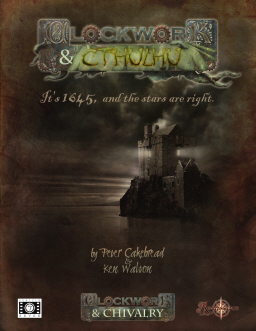 There are various further supplements planned, by us and others, for Clockwork & Chivalry – including the last two episodes of the Kingdom & Commonwealth campaign and a New World supplement (as well as a host of other stuff for Renaissance – but more of that another time).

One of our influences, from our own early gaming days, has been the epic Enemy Within campaign for Warhammer FRP – we wanted something of that mixture of gritty struggle for survival, dark humour, and epic world-saving in the Kingdom & Commonwealth campaign – and the fact that numerous people have said (in an admiring sort of way), “This reminds me of The Enemy Within!” means we must have got something right!

As a further note, things have come full circle. The game, originally spawned from a few pages of fiction, has inspired me to write my first Clockwork & Chivalry novel, The Alchemist’s Revenge, a grim and darkly humorous tale of revenge and friendship. The novel will be out later this year.

And that’s it! The story of Clockwork & Chivalry (minus the tears, the thousands of cups of hot coffee, the deadline panics, occasional artistic tantrums and frequent creative hiatuses). (And cider – you forgot to mention the cider! – Ken)

Peter Cakebread is a partner of Cakebread & Walton, and has co-written over a dozen books since the company’s formation in 2010, including the award winning Airship Pirates and Clockwork & Chivalry RPGs. Peter has an MA in a subject completely irrelevant to his current occupation, which is perhaps best described as “making stuff up”.

[…] Cakebread of Cakebread & Walton told you about our alternate English Civil War fantasy RPG, Clockwork & Chivalry. This month it’s Ken Walton here, and I’ll be taking a look at our music-inspired steampunk […]

[…] The English Civil War with Clockwork War Machines: an Introduction to Clockwork & Chivalry […]

[…] Black Gate is very pleased to offer our readers an exclusive excerpt from The Alchemist’s Revenge by Peter Cakebread, the first novel from the co-author of the role playing games Airship Pirates and Clockwork & Chivalry. […]

[…] appeared, co-author Peter Cakebread graciously accepted my invitation and wrote a fascinating follow-up piece for us, “The English Civil War with Clockwork War Machines: an Introduction to Clockwork […]