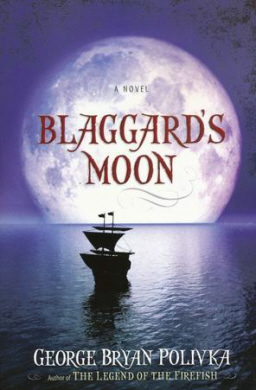 I don’t know much about George Bryan Polivka, to be honest. But I know he writes books I want to read.

I first discovered him while doing research for my most recent article on remaindered fantasy at Amazon.com. Two novels in his pirate-y Trophy Chase Trilogy were heavily discounted, so I figured that was worth a look. In the process, I discovered this standalone fantasy tale and decided to take a chance. It arrived this week.

“This is the story of the great battle between the pirates of the world and the band of merciless men who would purge us from the seas and make the name Hell’s Gatemen a source of terror to us all.”

Thus begins the tale told by Ham Drumbone, a pirate storyteller with a gift for dramatic detail. It is recalled by Smith Delaney as he awaits a gruesome death at the hands of ancient beasts called mermonkeys, who are eager to devour his bones. In the process of remembering, this simple pirate ponders, in his always earnest and often whimsical way, the mysteries of true hearts wronged, noble love gone awry, dark deeds done for the sake of gold, and the sacrifices made for love.

For Ham’s story is about Damrick Fellows, the great pirate hunter, who works his way ever closer to the great pirate king, Conch Imbry, only to find his focus blurred by his love for the pirate’s woman, Jenta Stillmithers. In the end, Delaney must come face-to-face with himself, with his choices, with the power of love, and with a God who promises him both a hell richly earned and a grace given where none is deserved. A swashbuckling fantasy story for all ages from Emmy Award-winning author George Bryan Polivka.

A little research reveals Polivka won his Emmy in 1986 for writing his documentary A Hard Road to Glory, on the racial prejudice faced by African American athletes. It also reveals he writes primarily Christian fantasy, which ought to make an interesting slant on a pirate novel.

I also ordered The Legend of the Firefish and The Battle for Vast Dominion, two novels in Trophy Chase Trilogy which are still available at discount prices on Amazon, which also feature pirates, epic sea battles, magic, and plenty of buckles that swash. Not sure which I’ll dip into first, but I’ll report back here as I learn more.