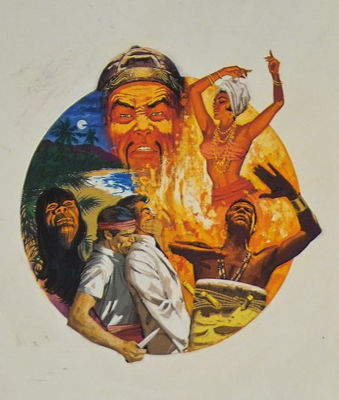 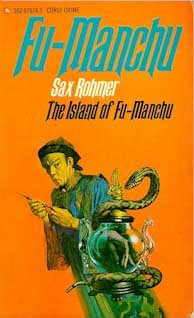 Sax Rohmer’s Fu Manchu and the Panama Canal was first serialized in Liberty Magazine from November 16, 1940 to February 1, 1941. It was published in book form as The Island of Fu Manchu by Doubleday in the US and Cassell in the UK in 1941. The book serves as a direct follow-up to Rohmer’s 1939 bestseller The Drums of Fu Manchu and is again narrated by Fleet Street journalist, Bart Kerrigan.

The second half of the book gets underway with Sir Denis Nayland Smith, Sir Lionel Barton, Bart Kerrigan, and the local Panamanian police chief holding a council of war to discuss the enigmatic Lou Cabot. A meeting is arranged by Kerrigan and Sir Denis with the dancer Flammario, who is Cabot’s former lover. Cabot is involved with the Si-Fan and has run afoul of Dr. Fu Manchu. Both the Devil Doctor and Flammario wish to see Cabot dead.

Flammario is meant to recall Zarmi from the third Fu Manchu novel, 1917’s The Hand of Fu Manchu, but she is more bitter than seductive. The exotic dancer leads Smith and Kerrigan to Cabot’s apartment. Unfortunately, the Si-Fan had the advantage and arrived before them. The place is in a shambles and they discover Cabot’s hideously mangled corpse. Kerrigan spies Ardatha’s ring on a shelf and knows that his lost love has fallen back into the Si-Fan’s clutches.

Sir Denis exerts all of his influence to prevent the Panamanian police chief from taking Flammario into custody. Kerrigan drives her back to the club, where she has a second show to perform. The sultry dancer makes a pass at him and Kerrigan agrees to wait for her in the bar until after she finishes her set. While watching the show, he unexpectedly receives a phone call from Sir Denis informing him that Barton has been attacked. 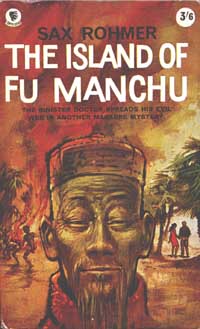 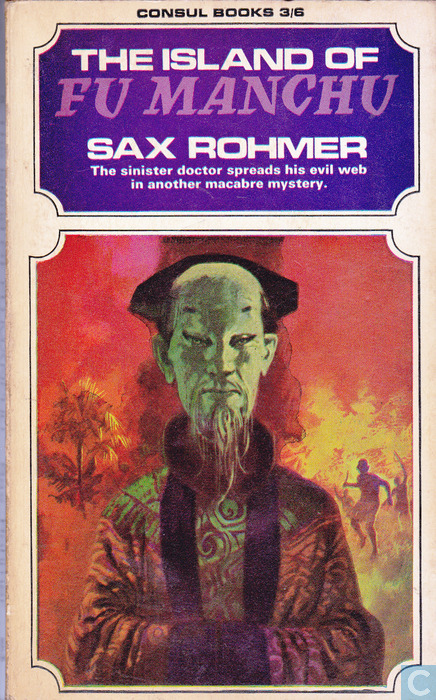 Meeting with Sir Denis and the police at their hotel suite, Kerrigan discovers Sir Lionel was not attacked as the police initially feared, but only drugged.

Recovering consciousness, Barton informs them his last recollection was seeing a disembodied green-skinned hand floating in the air toward him.

A search of the suite confirms that Peko, Fu Manchu’s pet marmoset, has been taken. They have lost their hostage as well as Ardatha to Fu Manchu. The Devil Doctor has had his revenge upon Lou Cabot. Sir Denis concludes they have no choice but to journey to Haiti, knowing Fu Manchu possesses every advantage.

No sooner do they arrive in Port-au-Prince than a second warning is received from the Si-Fan stating they have three days to arrange the withdrawal of U.S. Naval forces from the Panama Canal or suffer the consequences. Sir Denis, Sir Lionel, and Kerrigan meet with the local Jesuit missionary, Father Ambrose (an obvious reworking of the Reverend Eltham character from the first two books in the series). The priest informs them that the legends of Haitian zombies are quite real and discusses the mysterious voodoo queen Mamaloi, who has recently risen to power in the area and threatens the stability of the island. Sir Denis informs Fr. Ambrose that the Si-Fan have also descended upon Haiti and he fears they will  ally themselves with Queen Mamaloi.

The third quarter of the book concludes with Smith, Barton, Kerrigan, and Fr. Ambrose making their way through the jungle to attend a voodoo ceremony being held by Queen Mamaloi in the name of Damballah. Along the path, they stumble upon a caravan led by Dr. Fu Manchu himself. Fortunately, they are not spotted by the Devil Doctor or his servants, but it is enough to confirm that they must infiltrate the voodoo rites and thwart the alliance between Queen Mamaloi and Fu Manchu if they have any chance of saving Haiti and the Panama Canal from falling to the Si-Fan.