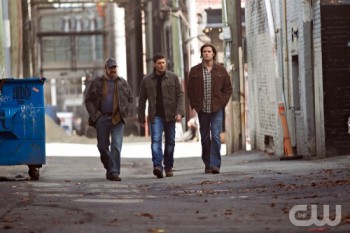 In this double episode finale, we get to the end of one of the best seasons. It started out a little rocky, but had some of the series’ best episodes, I think. The finale happened while I was a on a plane to Arizona for vacation, so I wasn’t able to review it until I got back this week. (Gotta love DVR!)

Things start out at a rapid clip, with a man at a typewriter in 1937. Shortly after finishing a manuscript, he is murdered. His blood splattered across the manuscript, revealing the man’s name: H.P. Lovecraft.

In the present, Bobby discovers that Castiel has stolen one of the Campbell family journals, by Moisha Campbell (of the New York Campbells). Fortunately, the paranoid Bobby had already made copies, so they’re able to figure out that Moisha Campbell had interviewed Lovecraft, who (as they explain to Dean) had a tendency to write stories about portals opening up and nasty stuff coming out.

Things change tack as demons break into Lisa and Ben’s house, killing Lisa’s boyfriend and capturing her. Ben is hiding in his room and calls Dean, but is caught. Crowley picks up the phone and demands a meeting with Dean. Dean goes to the meeting with Sam, but tells Bobby to keep looking into the Lovecraft connection.

Bobby interviews a Lovecraft enthusiast who explains that on the night in question, Lovecraft invited 6 friends (and by “friends,” he means worshipers in a dark cult) over to his house. Unfortunately, Castiel had already spoken to him … and also stolen the Lovecraft manuscript. Further investigation reveals that all of the attendees either died or disappeared within a year of the party, although the maid’s son survived and has spent the intervening 74 years in a mental institution.

After summoning Balthazar and discovering (surprise!) that he’s no help, Dean decides to go medieval on a bunch of demons, trying to torture Crowley’s location out of them. Sam tries to convince him this isn’t working, but Dean’s set on his course. Sam even goes so far as to pray to Castiel for help, which alerts Castiel to the fact that Crowley’s kidnapped Ben and Lisa. Castiel confronts Crowley over it, but Crowley is done taking orders. He won’t hurt Sam and Dean, but he’ll do whatever he pleases with Lisa and Ben.

At the mental institution, Bobby tracks down the old man who survived Lovecraft’s party. He tells him that the spell they cast worked, releasing an invisible entity that took over his mother. She was different, even smelled different, then disappeared … and one-by-one, the party-goers began dying. The man shows Bobby a picture of his mother, which sparks a curious reaction from Bobby, because the picture is of Ellie, the medieval studies/dragon expert who he used to date.

When Dean gets sloppy with his torture and a demon busts loose, Castiel shows up to save him. They have yet another little heart-to-heart, where Castiel asks Dean for his trust. This really seems fair to me, because Castiel’s repeatedly put his trust in Dean, even going so far as to oppose his orders from the Angelic powers because he believed more in what Dean was doing. In fact, the whole civil war is really started because he believes so strongly in the free will that Dean has taught him to cherish.

Despite Dean’s reluctance to trust him, Castiel promises to rescue Ben and Lisa if Dean stands down, which Dean takes as yet another ransom demand, like the one Crowley issued.  Their luck changes, however, when Balthazar turns up, saying that he thinks Castiel’s being overconfident and reckless.

The rescue goes awry when it turns out that Lisa’s been possessed by a demon. As Dean tries to exorcise the demon, it stabs Lisa’s body, daring him to remove the one thing keeping her alive. He finishes the spell and is able to escape with her and Ben, but she’s bleeding to death. Castiel shows up at the hospital. After Dean tells him off, he heals Lisa.

Dean asks for one extra favor … removing all memories of him, so their lives can get back to normal.

As Ellie is walking out of her house, Castiel shows up by her car. He puts his hand on her shoulder and vanishes.

The second episode of the finale starts with Sam fleeing through the streets, ducking into a bar. He begins talking to the bartender, played by Eureka‘s Erica Cerra. Turns out that Sam has full-blown amnesia.

A copy of a Lovecraft book triggers some memories, though, leading Sam (and his hot bartender sidekick) to a dive hotel. There, memories stir of he, Dean, and Bobby finding Ellie as she’s dying, telling them that she’s revealed to Crowley & Castiel the details of how to open a door into Purgatory, which includes blood from a Purgatory resident (hers counts). As Ellie dies, Castiel shows up and tells them to stand down, but Dean refuses. Castiel promises to save Sam when it’s all over, then touches him in the forehead … which appears to be what stripped Sam of his memories.

As he’s about to get into the Impala, though, there’s a gunshot. The gunman? Sam Winchester.

It turns out that Sam’s actually on a cot in Bobby’s panic room, trapped within his own head. There the other, soulless version of Sam, is vying for control of his body … by eliminating the wimpier version of Sam. Wimpy Sam, however, gets the drop on him and blows him away. As the soulless-Sam dies, however, he warns him that he really won’t like “the other one.”

With all of his memories back, Sam finally remembers the whole year when he lacked a soul … including an instance where a demon was holding an attractive female bartender hostage. He shot the hostage, thus eliminating the demon’s leverage. He apologizes to the bartender and she fades away.

Meanwhile, Castiel changes the terms of the deal on Crowley, telling him that he doesn’t get any of the Purgatory souls. Given the alternative to “flee or die,” Crowley chooses to flee … at least for the time being.

In his mind, Sam confronts another version of himself: the version that remembers Hell. In order to wake up, he has to put all of the pieces of himself back together, so he kills that version and re-absorbs the memories.

Having gotten Castiel’s location from Balthazar, Dean and Bobby make their way there. Castiel figures out that Balthazar betrayed him and murders him. A powerful cloud of demons swirl in, flipping over the Impala (with Dean & Bobby inside). Castiel tries to destroy Crowley, but it turns out that Crowley’s protected thanks to his new partner: the Archangel Raphael.

Castiel hands over a jar of blood, but it turns out that he anticipated their plan and had a jar of dog’s blood on hand while he pocketed Ellie’s blood. Crowley & Raphael cast the ritual, but nothing happens. Castiel, on the other hand, shows up with an empty jar, having successfully cast the ritual somewhere else.

Without any real effort, the newly-powered-up Castiel eliminates Raphael and releases Crowley. Dean begs him to release the souls back into Purgatory, to let the power out because he’s gone nuclear and it seems to be affecting his mind. Sam shows up, grabbing an angel blade and stabbing him through the back, but Castiel remains standing. As he explains:

… the angel blade won’t work, because I’m not an angel anymore. I’m your new God. A better one. So you will bow down and profess your love unto me, your Lord, or I shall destroy you.

Now that is a level up!

A great climax to the season, with them having taken the series in a completely different direction than I expected. (In fact, not a single one of my mid-season predictions bore out.) Word is that next season, Misha Collins (who plays Castiel) will be a guest star rather than a series regular, which makes sense given that he’s now gotten upgraded to God status so presumably will find himself occupied with more lofty pursuits than answering the Winchesters’ summons for help.