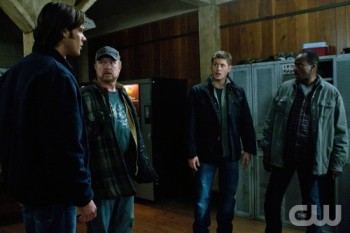 This week starts out with a cute girl being picked up by a trucker, attempting to seduce him. But, fortunately, he loves Jesus and tries to save her, telling her that the void inside is searching for him. She laughs, talking about how God created him and abandoned him. Then she whispers a secret into his ear …

and he goes home and smashes in his family’s heads with a hammer.

Sam, Dean, and Bobby are on the case. Turns out there have been a series of hunters running into massive monster populations, with many hunter deaths. Dean observes that it’s a “straight kickline down I-80…. Looks to me like it’s a Sherman march monster mash.” The march seems to be heading straight to the town where a man bashed his family’s head in with a hammer.

Upon interrogation, the man doesn’t seem to know why he killed his family. When reviewing the footage from the truck stop, they catch a look at the girl’s face, and realize she’s some kind of monster (there’s a freaky demon-looking face on the screen when she looks at the camera). Bobby guesses that the monsters might be coming in for Mother’s Day… and sure enough, this is Eve, the Mother of Monsters who was summoned a few episodes back.

A man then goes postal at the canning facility (where the trucker worked). Bobby investigates and runs into fellow hunter Rufus. They investigate the body, discovering a strange goo of some kind.

When they meet up with the Winchesters and go to investigate the cannery, they run into Sam and Dean’s grandfather, Samuel, who Dean had previously sworn to kill. Dean tries, but is thrown out of the room so the others can try to get information from Samuel.

In the bickering, one of Samuel’s family, Gwen, hears them talk about how Samuel handed Dean and Sam over to Crowley. She goes to get the truth from Dean … who then shoots her in the stomach. The insane murder rampage seems to have infected him.

Gwen dies, despite a valiant attempt at CPR by Rufus. Sam locks a door and they begin a search for Dean. (It’s not clear to me how they know for sure that Dean hasn’t gotten out of the cannery, which surely had more than one exit, but that’s the magic of television for you.) They find him, but he doesn’t seem to remember killing Gwen. He just remembers waking up and finding a worm crawling out of his ear before slipping into a vent. “It’s like a Khan worm on steroids,” Dean says, making an uncharacteristic Star Trek reference. They check Dean’s ear and find the same goo they found on the earlier body.

Realizing that any of them could be (or could get) invaded, they all hand their guns over and lock it into a storage locker. Bobby and Rufus make calls to their contacts in an effort to see if any of their fellow hunters have ever heard of a similar monster.

Samuel heads out of the room. Sam and Dean follow him and confront him over how he tried to sell them out to Crowley, but the heart-to-heart is cut short when Dean notices goo in Samuel’s ear. They get in a fight, but Samuel’s able to get away. The other hunters get their weapons back, then begin patrolling the building for Samuel.

Unfortunately, Samuel’s a damn good hunter and he’s able to set a trap that swings a door closed, so that Sam is separated from the others. Sam gets the drop on Samuel, though, but Samuel offers to share information about Sam’s missing year.

Instead, Sam pulls the trigger, shooting Samuel in the head.

The other three are glad to find that it’s Samuel, not Sam, who’s dead, but they can’t trust that Sam isn’t infected, so collect his gun and cuff him up. He thinks that Samuel was being controlled when he shot him, but they aren’t sure.  Bobby and Rufus go out to the car to get the tools needed to cut open Samuel’s skull and see if the worm’s still inside, then send the boys out so they don’t have to watch.

Bobby begins to apologize to Rufus for something that happened in Omaha. “You lost her because of me,” he says. Rufus tells him to drop it. “I will never forgive you.” A tense moment, to be sure, but not as tense as what follows. Rufus begins cutting into Samuel’s skull and then his eyes pop open and he jumps up off the table, attacking Samuel and Rufus, some kind of worm-controlled zombie.

Rufus gets knocked out, but Bobby is able to shove Samuel into a raw electrical cord. The body is electrocuted, causing the worm to crawl out through the corpse’s ear. Now they know it doesn’t like electricity, but don’t know whose body it’s in … so they get the clever idea to electrocute each other to see who it pops out of. Dean is first, followed by Sam and Rufus. Bobby is stalling, though, and then he stabs Rufus in the chest. (Frankly, this was one of the most unrealistic moments of the episode, because Rufus realized a moment before getting stabbed that Bobby wasn’t himself and even I could tell he was hiding something behind his back, so there’s really no excuse for Bobby being able to get the jump on him … although, I suppose in Rufus’ defense, he had just been electrocuted, so wasn’t at the top of his game.)

The boys are able to knock Bobby out and duct tape him to a chair, then begin interrogating the worm inside of him. The monster says it doesn’t have a name, because Even just cooked him up. She’s the mother of all monsters and soon there’ll be more monsters than people.

Finally fed up with the monster, they duct tape up Bobby’s mouth and ears, so the monster doesn’t have an escape route, and begin electrocuting him. This works at killing the monster, but also kills Bobby … just as the monster predicted.

Fortunately, this is a temporary condition, as revealed a few moments later when Sam, Dean, and Bobby are standing over Rufus’ grave. Bobby laments the errors of his youth, how he and Rufus had rode together for years, sort of like Sam and Dean, until Omaha. (Honestly, I wonder if the Omaha thing will come up in a future episode and be explained. If nothing else, it would be interesting to see a Supernatural novel that focuses on a young Rufus & Bobby.)

Dean cuts him off, indicating that whatever he did in the past doesn’t matter. For the record, Dean says, when he dies, they get a blanket forgiveness for any wrongs ever committed. It’s a moving end of the episode, a good place ramping things up to the final six episodes of the season.

The final commercial break indicates that those final episodes will start up again on April 15. Tax day! At least there’s one thing to look forward to.

[…] Campbell family’s hidden stash of demon-hunting lore, which is now free for the taking since Samuel died a couple of episodes back. It’s an extensive collection and they’re looking for […]