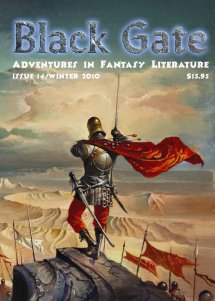 Mike Ferrante at the King of the Nerds blog has published a lengthy review of our latest issue:

Character driven stories with brisk pacing, often strange landscapes, and more often than not a boat load of action are what Black Gate is all about. It was a good time to jump on board with Black Gate since issue 14 (Winter 2010) is a double-stuffed issue clocking in at a massive 385 pages (in pdf), the print edition rivaling my 4th Edition Player’s Handbook in size. What’s most impressive about those 385 pages is the sheer amount of awesome fiction packed within… everything I’ve read has been fantastic in one way or another, and wonderfully unique as well.

He was especially impressed with “The Word of Azrael” by Matthew David Surridge:

By far my favorite story in this issue…  it was inspired by the snippets of biography that were featured in some of the old Conan novels.  As such “the Word of Azrael” reads sort of like a listing of deeds.  Brief highlights of a lengthy career that nonetheless serve as veritable seeds for the reader’s imagination.  Yet at the same time, in that sparse chronicle, Surridge still manages to convey a palpable weight to Isrohim Vey, a sense of gravitas and tragedy that a surround a character whom we know startlingly little about…  Fantastic stuff here and more than enough to make me damned glad I’m a Black Gate subscriber.

As well as “The Lady’s Apprentice” by Jan Stirling:

Another female lead!  Lady Nyla, once rich, now poor and a chosen if somewhat disgraced servant of the Mother Goddess is given a task once again.  Stirling manages imbue a sense of weariness and loss to Lady Nyla while at the same time  conveying a seemingly contradictory level of arrogance.  You feel for her yet in her thoughts and actions here you can almost see how she managed to fall out of her Goddess’ favor.  Her loss doesn’t seem to have diminished her pride and it is this seeming contradiction that makes this story such an intriguing read, and Lady Nyla such a fascinating character.

And Isabel Pelch’s “The Wine-Dark Sea:”

The weird environment of the magical zone seen here roughly analogous to the mysterious Zone of the world created by the brothers Strugatsky in Roadside Picnic and embellished by game and film.  Similarly the landscape within the land within the “lohan-taint” called to mind the landscape woven by C. L. Moore in Jirel’s descents to the weird dimension inhabited by the Black God.  Newyn, the protagonist, is fascinating wrapped in rags and forced to cover her face… and walking a fine line between mercenary and compassionate.  The glimpses of her past Pelch dishes out reveal how her upbringing forged her into who she is while their relationship to Newyn’s experience with lohan-taint mean they don’t divert the narrative of the story…. I definitely want to see more of Newyn and her world.

You can read the complete review here.