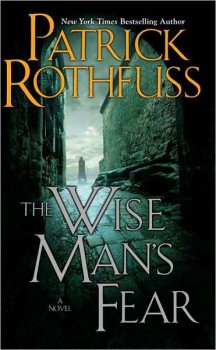 Patrick Rothfuss, whose second novel The Wise Man’s Fear was released last week, has published an open letter to Nathan Fillion in which he offers to assist the actor who played Captain Mal in his quest to buy the rights to Firefly:

Here’s the deal. My second book is about to come out. My publisher tells me there’s a decent chance of us selling a truly ridiculous number of copies. If this happens, I will have more money than I’ll know what to do with.

Except that’s not exactly true. I know exactly what I’d like to do with that money. I’d like to help you buy the rights to Firefly back from Fox…

Alone, all we can do is dream wistful dreams of Firefly’s return. Together, we are a team. We can gather others to our cause. With 20 or 30 of the right people, we could pool our resources and make this… happen.

You know where to find me.

Rothfuss’s first novel, The Name of the Wind, was released to wide acclaim in 2007. Both his novels are part of the Kingkiller Chronicles.

Fillion’s off-hand comment in his Feb 17 Entertainment Weekly interview (“If I got $300 million from the California Lottery, the first thing I would do is buy the rights to Firefly… and distribute it on the Internet”) has triggered enormous interest among fans who are hungry for any hope of the series’ return. Several fan efforts have sprung up to assist him, including helpnathanbuyfirefly.com.

It remains to be seen just how serious Fillion is, however (likely not very). Still, we can dream.

Rothfuss complete letter, published on his blog, is here.

I saw this a while ago — what a cool idea, but — as you imply, unlikely.

Besides, some things are whole in themselves and shouldn’t be meddled with.

On the other hand… It was an awfully neat universe. We’ll just have to see, I guess!

The revolution may be twitted but the Firefly disaster cannot be retro-fitted or re-booted. It’s back to the drawing boards and a whole new start.