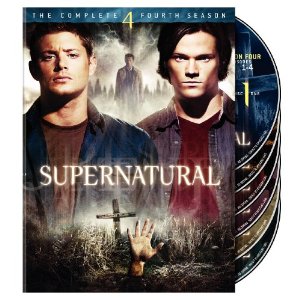 Yesterday, I described the second and third seasons of Supernatural which all built up toward Dean Winchester’s death, as part of a demonic deal to save his brother.

Dean was sucked into Hell, leaving his brother Sam on Earth with the demon Ruby, who has taken on something of a friend and mentorship role with him.

Season four of Supernatural began, a year after his death, with Dean crawling his way out of the grave with no real idea how he got back. But he doesn’t appear to be a demon or any other kind of beastie … so what’s going on?

Well, it turns out that Dean was dragged out of Hell by an Angel named Castiel. It seems that after centuries of leaving humans on their own to deal with the forces of Hell, the Heavenly Host has finally decided to step up and join the fight. Why? Because the apocalypse is coming.

Sam, unfortunately, has more pressing problems. He’s spent a year fighting beside Ruby and has developed some nasty mean psychic powers. In fact, he can telekinetically force demons out of their human hosts without killing the human. Cool, yes, but the problem is that this level of power requires drinking demon blood … and that this point Sammy is a pretty hardcore addict. He’s also having an affair with Ruby.

This season is great, with new revelations coming on a regular basis. Here’s the basic low-down of some of the highlights:

Sam falls for the plot and the season ends with him murdering Lillith, and thus releasing Lucifer into the world … and thus fulfilling Azazel’s plan, initiated all those years ago when he fed Sam some demonic blood as a child (and then killed his mother). 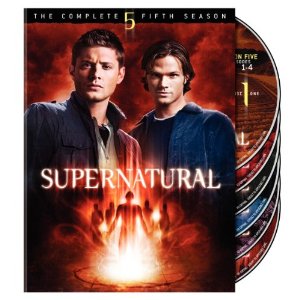 The fifth season winds down the clock on the world. Lucifer is out of his prison and there doesn’t seem to be anything that can be done about the impending end of the world. (Of course, if you’re reading this you know there’s a season 6, so the suspense is a bit diminished.)

Dean and Sam are now on the hit lists of both Heaven and Hell. See, they want to use Dean’s body for the Archangel Michael and Sam’s body has been cultivated to be the perfect vessel for Lucifer himself. Fortunately, they get some protection in the form of runes etched into their bones which keep them off of Heaven’s radar.

The season has great conflict and plays upon the revelations from last season. The Angel Castiel also became even more prominent, having clearly taken the side of humanity over the Angelic apocalypse.

A major theme of this season is brotherly conflict and Daddy issues. The conflict between Dean and Sam is mirrored by the relationship between Michael and Lucifer. Lucifer/Sam never quite lived up to their Fathers’ expectations, no matter how hard he tried, while Dean/Michael was the golden child who always did everything their Father wanted. It’s quite brilliantly done, and each note is hit perfectly. I was expecting God to show up at some point in the body of John Winchester, but that never happened … God is a complete no-show in this season.

The climax of this season brought some really great, surprising twists. My favoite: the third Winchester, Adam, is brought back from the dead. The angels figure that since Dean isn’t on board with being Michael’s vessel, Adam will be close enough.

Sam and Dean figure out a plan to stick Lucifer back in his prison. It turns out that each of the Four Horsemen of the Apocalypse wears a ring and if they join the rings together, it creates a portal back into Lucifer’s prison. They get their hands on the rings, but then it’s a question of how to get Lucifer to jump back into the pit.

Unfortunately, the only viable plan they come up with involved Sam offering himself as Lucifer’s vessel. If he does this, and is cranked up on demon blood at the time, he thinks that he’ll be strong enough to control Lucifer for just a moment and jump in.

The plan doesn’t go quite as expected (it never does), but Sam does ultimately succeed. Unfortunately, he not only jumps in himself, but also pulls Adam/Archangel Michael into the pit with him.

With the world saved, and both of his brothers dead, Dean returns to an old girlfriend (and her son – who is not his son) from an earlier season, hoping for a normal life. The season ends with a scene of Sam, for reasons unexplained, standing under a tree, watching Dean have dinner with the girlfriend and her son.

This Friday, Sept. 24, the CW is running the Season 6 premiere at 9/8c. You can check out promo videos on their website. Here’s their preliminary episode summary, including some spoilers:

It’s a year later and Dean (Jensen Ackles) has given up hunting and is living with Lisa (guest star Cindy Sampson) and her son Ben (guest star Nicholas Elia). Mysteriously freed from his cage in hell, Sam (Jared Padalecki) finds Dean and tells him he needs to rejoin the fight and introduces Dean to a world-a family-he never even knew existed: the Campbells, his mother’s family, lead by none other than their Grandfather Samuel (Pileggi). Phil Sgrricia directed the episode written by Sera Gamble.

[…] 6 starts a year after the events in the finale of Season 5, which I detailed a few days ago. This blog post is being written somewhat stream-of-consciousnessly as I watch the […]