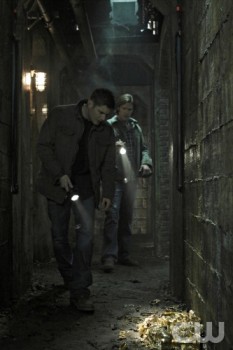 When we left Supernatural for its winter hiatus, Death had rescued Sam’s soul from where it was trapped with Lucifer and the Archangel Michael and placed it back into Sam’s body. (And I’d made several predictions about where the plot would go.)

We return to the series with the requisite opening monster attack … but let’s get to the important part: Sam’s got his soul back.

He’s unconscious, though, and Castiel can’t tell if he’ll ever wake up. He does, however, and doesn’t seem to remember anything that’s happened after he jumped into the pit with Lucifer & Mikey. (This is to be expected, because Death could only bring him back intact by “walling off” the part of his soul that remembered the torments inflicted upon him.)

Dean decides that Sam doesn’t need to know what’s happened, so tells him that he’s been in the hellish prison for a year and a half. He explains that Death brought Sam back, but doesn’t give further details. Bobby’s reluctant but does go along with the deception, although he makes it clear that Sam will figure it out eventually. (Turns out that eventually isn’t what it used to be.)

Sam and Dean start a case, which quickly takes a turn for the provocative, as Dean realizes, thanks to some prominent purity rings and reading a diary (an act that the now re-ensouled Sam finds scandalous), that the victims are all virgins.

“Who would want virgins,” Sam asks.

“Well, you got me,” Dean replies. “I prefer ladies with experience.”

There’s another attack, but this girl isn’t killed … because, let’s just say, she really shouldn’t have been wearing the purity ring. “That barn didn’t count!” she declared.

Investigations of virgin abductions, however, mixed with the description of the monster – fire, claws, flying, and gold – all lead to the same place: World of Warcraft fan sites.

“I don’t know what that means,” Dean says.

While researching, Sam asks if they’ve hunted a skinwalker lately, because of some deja vu. While Dean goes to follow up on an ex-girlfriend of Bobby’s who is a medieval studies professor, Sam summons Castiel and finds out that he’s been back for a while… without a soul.

Dean gets the information on what it takes to kill a dragon, which is a sword forged in dragon’s blood. Fortunately, the professor happens to have one. Unfortunately, it’s bonded to a boulder in her basement, Excalibur-style, and Dean is not worthy of pulling it out. Fortunately, Dean has explosives to blast the rock apart. Unfortunately, the sword is not indestructible.

(Note: Before anyone comments, I know that Excalibur was not the Sword in the Stone in most classical versions of the Arthurian legend.)

With about a third of a dragonsword, Dean returns to go after the creature with Sam. They’ll just have to get in closer, that’s all. Since dragons live in caves, they begin exploring the sewer systems. Dean finds a stash of gold (and pockets some), so they think they’re on the right track. They know they’re on the right track when they find a cage with a bunch of virgin prisoners. They fight two dragons in humanoid form (they have heat powers but it’s not real clear if they’re actually dragons, or just some kind of humans who are related to dragons somehow).

After the case is over, Sam confronts Dean about the last year and a half. Dean tells him that he’s better off not knowing, because if he breaks down the “Great Wall of Sam” in his brain, it could kill him.

The heart-to-heart is broken up by Bobby, who has deciphered part of  a book they brought out of the sewers. The book is written in a Latin-based code, on parchment made from human flesh. Basically, it’s an instruction manual on how to open a gate from Purgatory to let something out. The book calls the creature being let out the “Mother of All.”

The episode ends with this “Mother of All” being released from Purgatory. (Turns out the dragon-creatures had another stash of virgin victims to sacrifice for the ritual.)

Now, I have a theory about this new big bad. In Greek mythology, there’s a being, Echidna, who is the “Mother of All Monsters.” This is a literal title, because all of the Greek monsters were born from her. She is a half woman/half snake creature, so if we see any snake-like characteristics from this “Mother of All,” then that’ll be the clue we’re looking for.

[…] At the mental institution, Bobby tracks down the old man who survived Lovecraft’s party. He tells him that the spell they cast worked, releasing an invisible entity that took over his mother. She was different, even smelled different, then disappeared … and one-by-one, the party-goers began dying. The man shows Bobby a picture of his mother, which sparks a curious reaction from Bobby, because the picture is of Ellie, the medieval studies/dragon expert who he used to date. […]