I periodically go through Sharon Shinn phases. The word “thrall” comes to mind.

These fiction-consuming frenzies may last several weeks. When they end, I usually shake my fists at the sky and vow never to do it again. Ever. No more staying up every night for days on end rereading the Twelve Houses books and the Samaria series and that Jane Eyre retelling, Jenna Starborn, or Summers at Castle Auburn, or The Shapechanger’s Wife, or, or…

It’s exhausting, I tell you! The woman renders “prolific” a gross understatement.

And then I was offered up Troubled Waters to review for Black Gate. I’m not saying I snatched it out of John O’Neill’s hands as from the maw of many-tentacled Cthulhu. Or glared at him when he tried to take it back. I merely assured him, very calmly, that, Yes, I would like to review it, and oh does that mean I get to keep this copy, really, how nice, and no, that is not slobber on my chin. 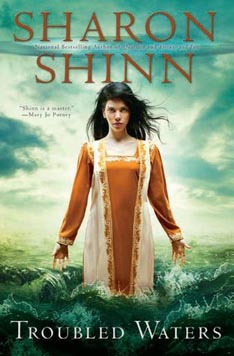 I thought, in Block Quotes, no less:

“Surely one more Sharon Shinn book wouldn’t hurt? Besides, all my other books are in boxes, destined for the storage unit. I won’t have any recourse to erstwhile habits. I’ll just read this book, review it right quick and be done!”

Well. The first day I read Troubled Waters twice. Once all the way through, and a second time for all the juicy bits. Then when my mother came to Chicago for a visit (and to help me pack up my apartment), I made her read it, because the protagonist with her water affinity (a “coru” as Shinn might say) put me in mind of my darling progenitrix. And then I read it again, in the bath. Speaking of water affinities.

So much for our best laid plans, eh?

Troubled Waters follows a young woman, Zoe Ardelay, from her exile in a small town and her grief over the death of her father, to the king’s city of Chialto, where she discovers her power. 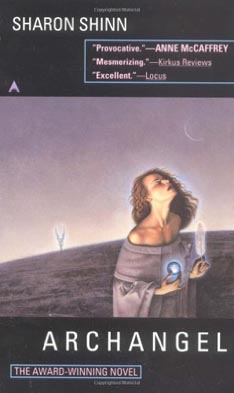 And when I say, “discovers her power,” I don’t mean “inner peace and a makeover”  — although you get some of that too, ’cause this is a Sharon Shinn novel.  No, this is frickin Fantasy all the way, so what I mean is, “She learns that she can make the rain fall down and follow her, and gentle the river with the might of her will. And stuff.”  I won’t explain how she does this, or why, because, as they say in Doctor Who, SPOILERS, DARLING!!!

Part of the fun of Troubled Waters, as in many Shinn novels, is the world-building. Early on we learn:

“In Welce, it was believed that all children came into the world receptive to one of the elements. Most often a child would take after a parent, or perhaps a grandparent, who exhibited a certain set of traits. But, really, there were no sureties. All the children were encouraged to discover their own internal sympathies… It was just a matter of discovering what kind of longing was in the blood, what kind of certainty was stamped into the bone.” 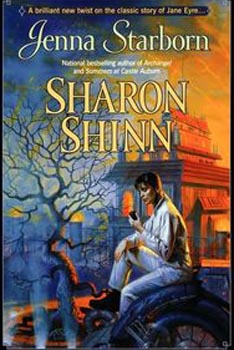 These elements are part of a system of “Random Blessings,” which is sort of like a religion without gods. A parent rushes out into the street to choose three random blessings for his or her newborn baby. These may fall under the category of Elay (air/soul), Hunti (wood/bone), Sweela (fire/mind), Coru (water/blood) and Torz (earth/flesh). The whole idea is a refreshing riff on the medieval Humours philosophy, lightly brushing some Ayurvedic concepts as well, but aloof enough from both to actualize this alien world and let it spin on its very own axis.

Zoe’s a fascinating protagonist in her way, because she’s so very gentle. Not one of your feisty spitfire yappy girl wonders. Not at all. “I am a woman of water,” she says at one point. “I am more likely to slip away in stealth than blaze up in wrath.”

For a good third of the book, Zoe doesn’t blaze at all. She is, in fact, pretty numb and quiet, plodding her way through her grief as we experience Welce through the filter of her perception. The book picks up after a bit, though, plunging us from the shallows of world-building and your basic character meet-and-greet and into the bubbling white water rapids of political intrigue. 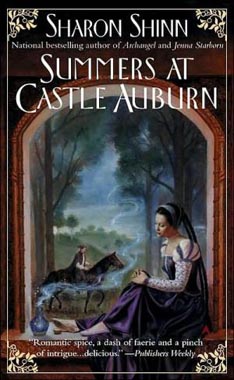 Speaking of which. Now, I like a good costume as much as any frustrated actor, but it did occasionally seem to me that the endless array of tunics and shoes and over-robes was a bit much. On the upside, however, one could clearly visualize the sartorial spectrum of Chialto. I do think clothes are important (they maketh the man and all that, and totally possesseth the woman), especially in a Fantasy novel where clothes might indicate stature or mood or a metaphorical emergence from grief into a renewed interest in life, love and handsome Hunti men. I do like clothes. Just maybe not that much.

Also, as are most of Shinn’s novels, this is a love story. Colorful characters scintillate all over the pages, dark conspiracies are thwarted, temples are visited, palaces and feasts and festivals are described. But beneath all that finery (which is on occasion very fine), there is a formula. And it is instantly recognizable (especially after having read every single Shinn book available at the library or in my bookstore), and perhaps a bit unsatisfying after all. 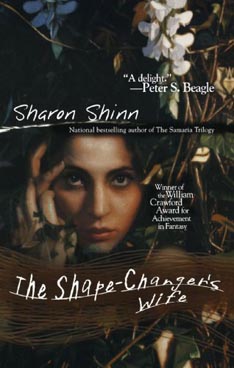 I don’t mind a romance, really. Sometimes I go out of my way to seek one out. And in the case of Troubled Waters, I earnestly enjoyed watching Shinn’s lovers being put through their paces, dancing out the inevitable pattern.

What I do mind, I guess, is that the pattern was inevitable. I chafed at the methodical set up and carry-through of every expectation: every bell rung, every box ticked, without much divergence or surprise. I recognize that in Fantasy there is a large and lucrative sub-genre which we might call, “glittery wish-fulfillment with some very nice make-out sessions” — and Sharon Shinn certainly delivers on this, with a craftwoman’s love for her art, a bright veneer of constant practice, and without a trace of true cynicism.

There are those of us who eat such stuff up, regardless of how it makes us feel after. Obviously, I read it more than once and will again. But Troubled Waters is not a book I would recommend indiscriminately. Probably the people who’d love it know exactly who they are.

[…] I’m all right.” Anyway, for an in-depth encounter with my Sharon Shinn thing, read my review of her book, Troubled […]

[…] wrote about the first book in the series Troubled Waters two years ago, and of course once I was finished with Royal Airs, I had to go back and reread the […]

[…] But look! I ALREADY REVIEWED both Troubled Waters and Royal Airs here at Black Gate Magazine some years ago, which, if you care to read them, are […]