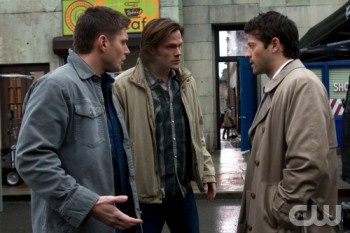 The episode starts with the Angel turned scam artist Balthazar showing up, hastily explaining that the Angel Raphael is winning the civil war in Heaven and has put a hit out on the Angel Castiel and everyone else who opposed him, including Balthazar, Sam, and Dean. In order to protect his stash of stolen weapons from Heaven, Balthazar gives Sam and Dean a key and casts a spell. They are thrown through a window … only to land on a stunt pad.

Turns out that they’re in the real world, where they are the actors Jared Padalecki and Jensen Ackles, stars of the television series Supernatural.

This isn’t a terribly original premise. Among other things, I recall a similar gimmick being played in Hercules and/or Xena (it’s all a blur). Even on Supernatural, this angle has been explored before.

In the season 4 episode “The Monster at the End of This Book” (a title inspired by one of my favorite children’s books), Sam and Dean discovered that a series of trashy horror novels were based on their exploits, written by novelist turned prophet of the Lord (who was exploiting visions of their lives).

Last season, they even ended up drawn into a Supernatural fan convention.

The first half hour of this episode focuses on Sam and Dean realizing the rules of their strange supernatural-free world, such as Jared being married to the actress who played the demon Ruby, Castiel’s actor being a Twitter fanatic, and the pair of them trying to stumble through a day’s work as an actor. Plus, they don’t even live in America, but in Vancouver, and Sam owns alpacas! They experience the pleasures of having good credit to buy the components they need to cast the spell back to their own reality, but its ultimate failure leads them to believe that this world is devoid of any magic.
Unfortunately, their tinkering allows Virgil – the angel hunting them – to enter this reality. But, since there’s no magic here, Virgil has no angelic powers … meaning when he attacks Sam and Dean, it’s reduced to a normal fist fight. Before the show’s crew break up the brawl, he’s able to grab the key from Sam’s pocket. Virgil then kidnaps and sacrifices Misha Collins (Castiel’s actor), in an effort to cast a spell that will allow him to get through to Raphael in his home dimension. According to the homeless man who witnessed it, the voice that replied said that if Virgil returns to the place of the crossing, Raphael will draw Virgil and the key back through into their rightful reality.
Meanwhile, the show’s producers are worried about the erratic behavior of their leads (not to mention the death of Misha Collins – which at least had the benefit of getting them on the cover of Variety), so they call in the big gun to get them back in line: show creator Eric Kripke.
Unfortunately, Virgil has a bigger gun and uses it to kill Kripke. (The role was played by an actor, not the real Kripke, which is kind of a disappointment. You’d think Kripke himself could have shown up for something like that.) Sam and Dean fight Virgil and get the key back, only to be sucked back through the window.

To get a flavor of how subtle some jokes in Supernatural can be: When sucked through the window, they fly at the window and there’s a freeze-frame as they collide with it, followed by an immediate cut to commercial break. Earlier in the episode, the producers and crew had discussed how to deal with a technical error that lost footage of them actually crashing through the window. One of the crew suggested a freeze frame, which was identified by the director as “passable,” with a hint of distaste in his voice. When they later pull off that exact gimmick … now, that’s good TV.

After coming back from the break, Raphael attacks the brothers … only to be interrupted by Balthazar. Turns out that he never gave them a real key, but only a decoy to stall Raphael and Virgil long enough for him to find the weapons and give them to Castiel. With the weapons of Heaven at his disposal, Castiel is able to order Raphael off.
Though an interesting and fun episode, it had the odd effect of having Sam and Dean in a very reactive role instead of being particularly proactive. There was a major shift in the balance of power and they basically missed it. Their major act of the episode – intervening to keep Raphael from gaining Balthazar’s key – proved to be pointless, because the key didn’t give access to anything useful.

Black Gate » Blog Archive » Supernatural Spotlight - Episode 6.16 “And Then There Were None”