If you know Claire at all, you’ll understand why I received this intelligence with equanimity. Of course she does; of course they are. Poor fools. They’ll soon learn better, and be begging our Claire for one cool disdainful look cast from beneath her mighty lashes.

If you don’t know Claire at all, I highly recommend the acquaintance.

I confess, however, to being somewhat surprised by the body of the message, which went as follows:

You don’t even KNOW!

Unless you did — and you didn’t TELL ME!

Why? Why not until THIS MORNING???

Francesca Forrest sent me this. Now I must own the rest.

Attached was an mp3 of a song called “Hey Little Songbird.” I listened. It was a duet between Hades and Eurydice, Greg Brown and Anaïs Mitchell. I liked it. I said, in reply:

He has a voice made of marrow and whiskey and deep-reaching, tangling roots.

I quite liked hers, too — short of breath, desperate, confused, attracted. Mmm.

May need to listen to whole thing!

Do you see that? The contrast? I liked it — but Claire was passionate, drunk on her Greg, adoring, in the first flush of her love and need to share that love, and I was, I confess, a little wary of disappointing her with my lukewarm “like.” I mean, it’s a good song! Sure! I was interested in hearing more!

Then Claire sent me the album for my birthday, and I listened to that song in context. Context, my dears, is all and everything. Since receiving the gorgeously illustrated treasure of that album in the middle of December, I have listened to it, on average, twice a day, and am completely, unabashedly, extraordinarily in love with it.

I am not exaggerating. I have spared you a paragraph in which I calculated how I know it’s an average of twice a day. Just trust me on that.

According to the website, Hadestown is “a folk opera based on the Orpheus myth and set in a post-apocalyptic American Depression era.” The songs are written by Anaïs Mitchell, the score is by Michael Chorney, and it’s produced by Todd Sickafoose.

It features Anaïs Mitchell as Eurydice, Justin Vernon (of Bon Iver) as Orpheus, Greg Brown as Hades, Ani DiFranco as Persephone, Ben Knox Miller (of The Low Anthem) as Hermes, and the Haden triplets as the Fates. Together, they enact the story of Eurydice’s descent into Hades—but set in a world where people have to choose between singing and eating, the freedom of starvation or the slavery of endless work.

Even having listened to the whole album through as many time as I have, it keeps finding new ways to surprise me: some musical nuance here, some new way to read the lyrics there. Writing this review is difficult because, so far, I have never had to explain to someone how and why it is brilliant; all I’ve had to do is gift friends with a copy, or point them towards the website and let them be seduced by Peter Nevins’ brilliant art. Nevertheless, I will try to do it justice.

Rather than sum up each song, I will point you to the libretto. Go, read it. I’ll still be here when you get back.

Let me tell you about their voices. Eurydice’s is balsamic glaze over melting chocolate, ache and sorrow and hunger and loss. Orpheus is a three-part harmony with himself; I think of his character as a cloud of bees, rising, settling, because his voice is so diffuse, otherworldly. Hades’ voice is subterranean, black rock and vibration that must be felt rather than heard. Persephone’s voice is a swaying of hips, a smile full of secrets, a wisdom and a joy. Hermes is a ragged gritty growl, the Fates are poised and perfect and enmeshed as loom-work.

Over the course of twenty tracks, Hadestown sets up a number of dichotomies: poverty and wealth, nature and industry, freedom and enslavement. These dichotomies are reflected in the relationships we’re shown: Eurydice is hungry, desires work and material wealth, while Orpheus airily says the river, trees, and birds will provide for them; Hades builds solid walls around his kingdom, while Persephone plies contraband stars, wind, and rain there unbeknownst to him.

These dichotomies never resolve themselves: they’re halves that need each other, keep reaching for each other, but never mix, never balance out. That’s the tragedy of the piece – that everyone fails to be anything but themselves alone, and we’re left wondering whether the world is as flawed as it is because of that, or whether their failures are the fault of the world that won’t allow them to succeed.

This is important. The first twenty or so times I listened to this, I was furious at Orpheus for being what Hades characterised him as: “some kind of poet, and he’s penniless…He’ll write you a poem when the power’s out.” I thought Orpheus was weak, too dreamy by half, and resented his voice for being a chorus, for being something I couldn’t pinpoint solidly enough to confront.

But the more I listened, the more I discussed it with my sister, my father, my friends, the more I saw how many more ways there are of reading their performances: how much love is bound up with how much anguish, how many facets there are to the diamonds, the wine glasses, the bricks in the wall. Orpheus’ songs are among my favourites, now, and increasingly there is no one song that isn’t brushed by the genius of the whole. This is modern mythmaking: characters that allow us to see ourselves in them, our struggles in theirs, our hopes and failures in their actions and reactions.

This is running long, so I’ll focus on just one song to rave about in depth: “Why We Build the Wall.” 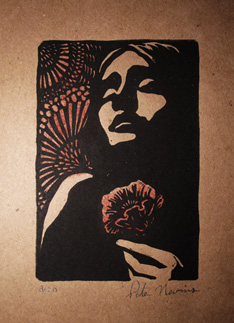 The wall is a closed circle of logic that permits nothing in or out. There is never any harmonic variance in this song, nothing to distinguish the mass of voices from each other as they all labour at the same task for the same nonsensical and self-fulfilling reason: to keep poverty out by means of walling themselves in, to claim freedom through enslavement. It’s the kind of song that’s jarringly relevant to any kind of conflict where language and perception are weapons to be manipulated and deployed—which is to say, just about all of them.

Hadestown succeeds on every level for me: musically, it is rich and complex, masterfully composed; lyrically, it is wise and knowing, every step calculated and deliberate, with shadows fore and aft rippling through it all; the performances are unbelievably brilliant. 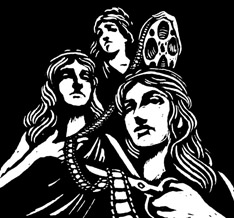 If there is any flaw, it’s that it’s over too soon; the story of Orpheus and Eurydice having been so cleverly adapted in the first two acts, I thought the third would bring some further nuance yet – which it does, with the reverse elegy, but I felt there was, perhaps, just room enough for a little more, a little further unpacking and adapting of the myth to so original a setting.

This is a review wanting desperately to be a thorough and nuanced article. It is not. But this is the danger of Hadestown: if you want to get to the bottom land, it’s a long, long way down, and the getting out’s tricky: I haven’t been able to keep my back turned to it for more than a day.

You know, I think a childhood pouring over Edith Hamilton and Bullfinch’s Mythology already gave me whatever context I needed to love that song wholeheartedly.

…Also, maybe, that utterly FOOLISH musical I wrote in high school about the Orpheus/Eurydice descent. Like so:

Hades: He’s just another fool, my sweet
He came to see if he could face the beast who guards the door…

Uh, yeah. OBVIOUSLY we should leave such things to professionals like Anais Mitchell. 🙂

But the POINT is, I guess, that it wasn’t all (on my part) OMG GREG BROWN SALIVATE DROOL WORSHIP…

…Um. Not that my childhood is immediately apparent in the body of that particular email, so I can UNDERSTAND the confusion.

…And not that I wouldn’t, given the opportunity, GILD THAT MAN’S VOCAL CHORDS and set them upon A HIGH PLACE! But then he wouldn’t be able to use them. So never mind.

I do love this review. I do so love it! Thank you for writing it! Mine would’ve been all caps and incomprehensible.

Amal, I feel EXACTLY as you do. It is about the most perfect album in every way–the music, the voices, the libretto, the artwork even.

I love all the characters so tremendously–they are so very, very real. What an incredible spell cast by those voices, singing those words, to those tunes.

It’s all your fault, you know, Asakiyume! You started it.

Well, from my perspective, Sonya Taaffe started it! But I’m glad to have kept the ball rolling.

THE WALL! I love “Why We Build the Wall.” My hands turn into grasping, wanting, little fists at its total brilliance.

I have gifted Hadestown to at least two others and wrote about it for my Library’s blog. More people need to hear this album!

And lord, lord, I wish they would take the whole ensemble on a wider tour!!! RAR! WANT!

I love Amal’s idea, too, of the third act. Who wouldn’t want to see Orpheus RIPPED APART by a crew of lascivious dustbowl carnies? Or perhaps by some charismatic group in a revival tent or something… Think of the MUSIC!

A fine examination of a great album. I’ve been thoroughly enjoying it.

You picked a great song to focus on with “Why We Build the Wall.” Man, that song haunts me. Very 1984-like in its paranoid circular logic, and simultaneously so chilling to hear the utter conviction in Hades voice. A leader you could follow anywhere, even into insanity.

Oh, and thanks to Claire for the gift of the album. 🙂

That’s me, spreading the good news and paranoid circular logic in an irrefutable baritone. Even if it’s not my own.

The Virginia Sings Hadestown tour kicked off in Charlottesville a couple of weeks ago, featuring local performers in the various roles. Good show, even without Greg Brown. It is, alas, already over, but you can see the tour poster at http://www.devonsproule.com/2011/02/virginia-sings-hadestown/

[…] my friend Fetch works out to it on the treadmill, Amal listens to it twice a day (as she mentioned in her review last Monday), and the Great Robot Overlord John O’Neill likes to scare himself with the fathoms-deep […]

[…] set in an American Depression-style  setting, with Hades as boss of a company town; in addition to reviewing it at gushy length for Black Gate, it has become so entwined with my family’s life that my […]