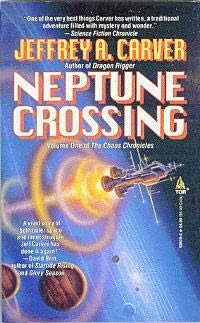 Neptune Crossing, by Jeffrey A. Carver, is the first of a series. As with some other books I’ve reviewed, it feels unfinished and awkward without its sequels. That’s not to say that it’s a bad book, or that you shouldn’t read this series, but you might want to pick up Strange Attractors at the same time and treat them as a set.

John Bandicut is a man with problems. He works for a mining company on Triton, the same mining company that caused him to lose his cybernetic implants, and he’s going insane from that loss. Also, an alien called a quarx has moved into his brain, declaring that he has to help it save the Earth — possibly doing quite a bit of the work himself, as the quarxx might die before the job gets done.

And it’s probably a suicide mission. And he can’t tell anyone. And he’s met a woman he likes.

Quite a lot of this book is about Bandicut struggling to cope with his situation, and sometimes failing. There’s sometimes a palpable sense of isolation and depression, which fits the subject matter; first and foremost, Bandicut has to wrestle cooperation out of his own mind.

There are extended internal dialogues between Bandicut and the quarx, who he names Charlie. Anyone who gets annoyed by odd formatting will have trouble getting through it. Charlie’s dialogue is centered, set off by three slashes, and italicized. I found this excessive, but I can see why Carver wrote it that way. There’s more than one source of internal dialogue in this series, and the formatting changes do help to keep it all straight. 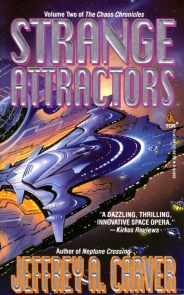 In short, this isn’t a high-action space opera. It’s about the relationship between Bandicut and Charlie. Charlie seems well-meaning, but he’s also alien, right down to his life cycle. He has the capacity to be ruthlessly manipulative; his idea of a good diversion is effective, but not heroic in the least. And, of course, he deliberately chose Bandicut for a host, without permission, because Bandicut was mentally unstable and isolated from other humans.

Bandicut isn’t a classic hero either; he’s damaged, irritable, doesn’t cope well with people, and if you warm up to Charlie you’ll occasionally find his treatment of the quarx downright nasty. Perhaps because of his illness, Bandicut’s attitude towards the quarx tends to veer unpredictably, one moment hostile, the next moment dependent. Charlie is by far the most active party in this story, despite not having a body of his own.

This story doesn’t have quite the exotic setting that characterizes later books in the series. The surface of Triton is alien enough, a dangerous icescape with Neptune hanging eerily in the sky, but much of the book takes place in the rooms and corridors of the MINEXFO base.

Also, Strange Attractors adds several characters, changing the dynamic immensely. Neptune Crossing almost feels like an extended introduction, a look into Bandicut’s background and Charlie’s spiraling existence. In some ways, one feels that the bulk of the story starts as the book ends — which it does with a beautifully dramatic hook, not quite a cliffhanger, but close.

All in all, while Neptune Crossing is the beginning of a fascinating space opera, it doesn’t feel entirely right on its own.