The Best of Lucius Shepard, Volumes One and Two (Subterranean Press,
August 2008 and December 2021). Covers by J. K. Potter and Armando Veve

I think the first thing I ever read by Lucius Shepard was his famous novella “R&R,” an ultra-realistic tale of American G.I’s in near-future Guatemala caught up in a senseless war guided by psychics, and fought by young men on a dangerous cocktail of combat drugs. It was unlike anything I’d ever read before, and it took home many of the industry’s top awards, including the Locus and Nebula. Shepard, who died in 2014, published a dozen novels — including Philip K. Dick nominee Life During Wartime (1987), Locus Award winner The Golden (1993) and A Handbook of American Prayer (2004) — but his major work was at short length.

Fourteen years ago William Schafer at Subterranean Press did the world a favor and published The Best of Lucius Shepard, a monumental volume collecting seventeen of his most famous and acclaimed works of short fiction. For most writers that would certainly be adequate, but it was not for Shepard, and at the end of last year Subterranean finally released a massive 848-companion volume containing over a dozen new tales, including Nebula nominee “A Traveler’s Tale,” Hugo Award-winner “Barnacle Bill the Spacer,” the Dragon Griaule tale “Liar’s House,” and three previously uncollected novellas. 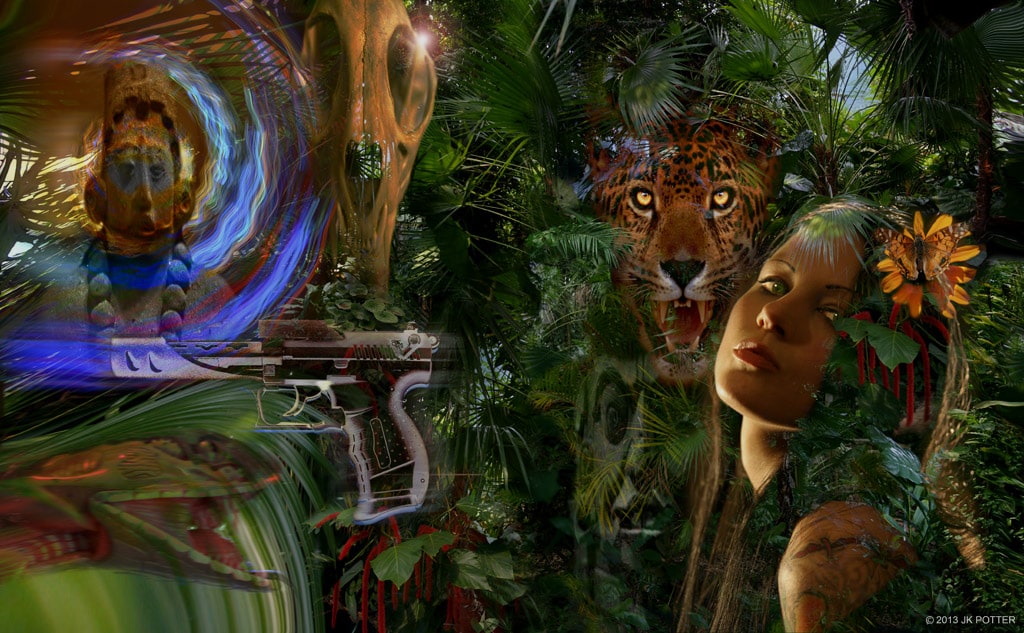 Wraparound art for The Best of Lucius Shepard by J.K. Potter

The publisher’s website included this on-point justification for Volume Two.

When Lucius Shepard passed away in 2014, he left behind a body of work unparalleled in its richness, power, and sheer originality. In 2008, Subterranean Press published The Best of Lucius Shepard, which served as a massive monument to an extraordinary career. Over time, this monument has proved insufficient, so we now have this even more massive second volume. It is a gift that Shepard’s many devoted readers will take to their hearts. Weighing in at more than 300,000 words, spread across nearly 850 pages, this magisterial book brings together fourteen stories and novellas, three of which (“Aztechs,” “The Last Time,” and “Ariel”) have never been previously collected. Each of them, without exception, is worth returning to over and over again.

Locus magazine had a fine review which describes some of the best stories within.

My favourite of these stories — though it’s not an easy choice — is ‘Dagger Key.’ Set on a fictional Caribbean island off the coast of Belize, a local man named Fredo, possessed by the spirit of his ancestor, the Pirate Annie, faces off against an entitled and duplicitous white couple seeking to strip Fredo and Annie of the family’s treasure… ‘‘Ariel’’ is a twisted sort of love story about a couple who have been tasked to hunt and kill iterations of each other to save the multiverse from destruction. The provocative ‘A Walk in the Garden’ is about a platoon of American soldiers in Iraq who discover a gateway into Paradise (it doesn’t end well), while the explosive ‘AZTECHS’ is an uber-violent story of competing drug cartels and the aspirations of a God-level artificial intelligence. At the top of the heap, at least for me, is the sublime ‘’Dog-Eared Paperback of My Life.’’ It’s the tale of best-selling fantasy novelist Thomas Cradle who happens across a book on Amazon, The Tea Fores, written by an alternative version of himself. In deciding to follow the same journey chronicled by his alter ego, a sex and drug-fueled expedition across Cambodia and Vietnam, Cradle will come face to face with multiple versions of himself and will come to realize his true purpose and the true purpose of all Thomas Cradles. This feverdream of a novella, riffing on Conrad’s Heart of Darkness and featuring one of the most vicious take-downs of genre fiction and fandom ever put into print, is an encapsulation of everything I love about Shepard: the lush, indulgent prose, the large servings of sex and violence, the plots that unspool in unexpected directions and a setting, beautifully realized, that is somewhere other than mid-west America.

I’ve only dipped into these two volumes, but they are a treasure I expect to return to again and again.

The Best of Lucius Shepard (which credits no editor, and contains no editorial content) includes the Locus Award winners “Salvador” and “Radiant Green Star,” the Locus and Nebula Award winner “R&R,” multiple award nominees “The Man Who Painted the Dragon Griaule,” “Stars Seen Through Stone,” and “The Jaguar Hunter,” and no less than six novellas, including “Jailwise” and “Hands Up! Who Wants to Die?” Get all the details at the Subterranean website here. 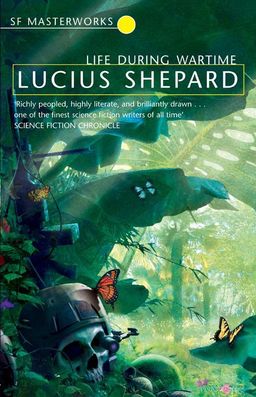 See all our coverage of the best new SF and fantasy releases here.

Hope the new stories come out in cheap editions

I wouldn’t hold your breath for paperback editions of the Subterranean editions (although the Kindle editions are very reasonably priced!)

Still, there are plenty of paperback collections of Shepard’s work, including The Jaguar Hunter, Kalimantan, The Ends of the Earth, Beast of the Heartland, and Eternity and Other Stories. Most are now out of print, but not too hard to track down — or particularly expensive.