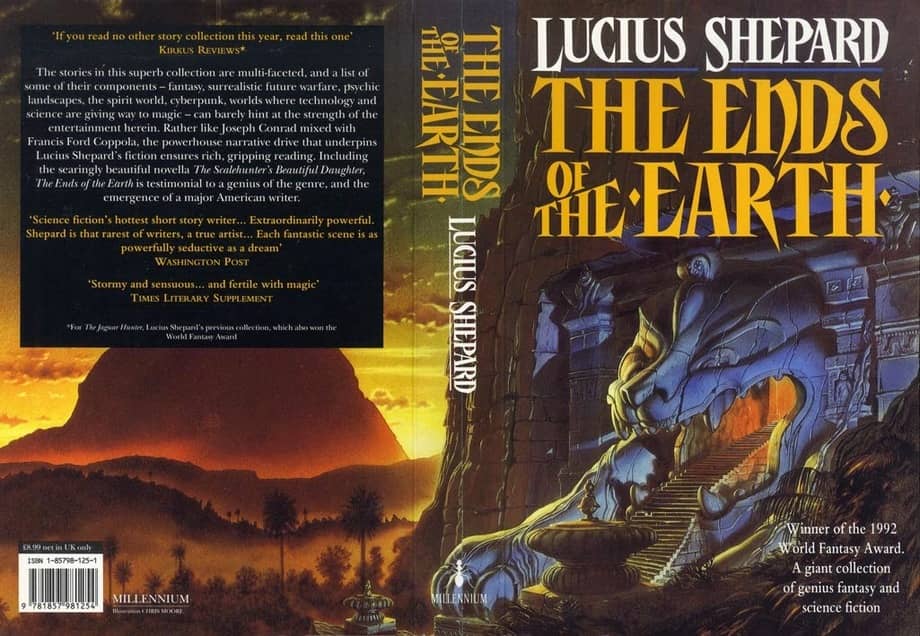 When he died in 2014, it was my unfortunate duty to write an obituary for Lucius Shepard. I considered him one of the finest short fiction writers in the genre in the 80s and 90, and tried to explain why in three short paragraphs. Here’s the core of what I wrote.

I first encountered him in the pages of Omni magazine in 1988, with his novelette “Life of Buddha.” I remember being astounded with the natural realism of his dialog, which captured the flow of modern speech in a way I’d never seen before. I read his brilliant Nebula Award-winning novella “R&R” — which opens with an artillery specialist in Central America getting a glimpse of a war map and wondering if he’s somehow caught up in a war between primary colors — and the novel it turned into, Life During Wartime (1987). His dark visions of the near future frequently involved inexplicable wars, and he wrote extensively about Central America, where he lived briefly.

Four years after his death, Shepard is in danger of being forgotten. Virtually all of his work is out of print, and his finest work — his award-winning short stories — is getting harder to find. Fortunately, it’s not getting more expensive. Those who know what to look for can snap up his best collections are bargain prices. In April I was the only bidder on eBay for a brand new copy of his World Fantasy Award-winning The Ends of the Earth (1991), and won it for the criminally low price of $7.99. It’s one of the finest fantasy collections of the last 30 years.

The Ends of the Earth has been out of print in the US since it was published in hardcover by Arkham House in 1991 (above left, cover by Jeffrey K. Potter). It had a better run in the UK, with a simultaneous hardcover/trade paperback release from Millennium in 1993 (above right, cover by Chris Moore), a mass market paperback in 1994, and an ebook edition from Gateway / Orion in 2015.

The Ends of the Earth includes three long novellas, including  the Locus Award winning novella The Scalehunter’s Beautiful Daughter, originally published as a limited edition hardcover by Mark V. Ziesing in 1988:

Here’s the complete Table of Contents, with award citations.

I remember Shepherd for three works: ‘Life During Wartime’, a book I’ve always associated with Geoff Ryman’s ‘The Unconquered Country’, maybe because the two share certain thematic similarities, and the same literary flair. Then there was ‘Sylgarmo’s Proclamation’ * (a story in the style of Vance’s Dying Earth, and very good it was too) and finally ‘Only Partly Here’, a 9/11 themed story with a slightly cheesy concept redeemed by the quality of the writing.

* What makes me think I first heard about this story on Black Gate?

Time can be cruel. Like you, I think Lucius Shepherd was one of best short story writers of the 1980s and 1990s. Hopefully Haffner Press or Subterranean Press or another publisher will collect Shepherd’s work in new editions.

I remember running into Mr. Shepard’s stories in Asimov’s in the mid-1980s at the same time that James Tiptree Jr. was also writing about the Quintana Roo (Yucatan), so there seemed to be a real focus on Central America as the next sf locus.

And then there were the Dragon Griaule stories in F&SF, which seemed to pair off with Michael Swanwick’s Iron Dragon stories, not least for involving daughters in the narratives.

For those off-beat perspectives on sf and fantasy at the least, Mr. Shepard’s work deserves to be remembered. Alas, it seems a Cordwainer Smith Rediscovery Award may be in order, an award that no writer would be happy to win (much like Comeback Player of the Year, since you need to have some disaster from which to come back in order to qualify).

> What makes me think I first heard about this story on Black Gate?

Good question! I’m not familiar with that story (although it sounds great!) A quick search of the site didn’t turn up anything.

I did enjoy LIFE DURING WARTIME very much, although I remember being a little frustrated at how directionless the plot was. Still, there were some terrific set pieces, like the scene where they stumble across the downed helicopter and the bomb-control computer that believes it’s God. It might be time to re-read that book….

> Hopefully Haffner Press or Subterranean Press or another publisher will collect Shepherd’s work in new editions.

I don’t think Shepard’s collections sold all that well while he was alive, so I’d be surprised (but very pleased) to see a significant new retrospective volume.

The exception might be if one of his tales is adapted for film… the Dragon Griaule stories maybe? That kind of spotlight could introduce him to a whole new audience.

> SubPress did do a Best of Shepard collection back in 2011 — it’s available on Kindle for the criminally low price of $2.99

Subterranean’s THE BEST OF LUCIUS SHEPARD is a fabulous book. And at 600+ pages, it’s a veritable feast! But it was also a limited edition collectible from a small press, which means it sold to collectors, and wasn’t meant to introduce Shepard to new readers. That’s what he really needs these days.

On the plus side, there’s nearly a dozen copies of THE BEST OF LUCIUS SHEPARD available on eBay right now, starting at around $20. Modern readers who are curious can get his books cheaply, and that’s something.

> Alas, it seems a Cordwainer Smith Rediscovery Award may be in order…

You could be right (and the Cordwainer Smith Rediscovery Award is a really terrific idea.) But have a look at the recent winners:

These are chiefly pulp-era writers. Judith Merril was active in the 60s and 70s of course, but that’s still 2-3 decades before Shepard. So he’s probably too new to be seriously considered.

There’s a bitter irony in that…. too old for modern readers, and too new to be “rediscovered.”