Peter F. Hamilton made a name for himself in the early 90s with a popular SF series featuring Greg Mandel, a veteran of a tactical psychic unit in the British army who becomes a psychic detective in a near-future Britain where the messy collapse of a communist government has left the country in ruins (Mindstar Rising, A Quantum Murder, and The Nano Flower).

By 1998 he had a bestselling space opera series on his hands, the Night’s Dawn trilogy. Set in a sprawling far-future timeline known as the Confederation Universe, it was a huge departure from his early gritty SF noir. Hamilton first explored the Confederation Universe and the Affinity tech in a series of short pieces published in 1991 and 1992, and when the first books in Night’s Dawn, The Reality Dysfunction and The Neutronium Alchemist, started hitting bestseller lists in Britain he released his first collection.

A Second Chance at Eden gathered all the early tales plus two new novellas (“A Second Chance at Eden” and “The Lives and Loves of Tiarella Rosa”) and a new short story, “New Days Old Times.” The first piece in the series, “Sonnie’s Edge,” was adapted as an episode of Tim Miller’s Netflix anthology series Love, Death & Robots in 2019.

The stories in A Second Chance at Eden give us glimpses into Confederation prior to the time of Joshua Calvert and Quinn Dexter, two of the primary characters in the Night’s Dawn trilogy. They take place between 2070 to 2586, and appear here according to the internal chronology of the Confederation Universe.

The author includes a 1-2 page timeline summary before each tale, filling in the narrative gaps. As Hamilton points out in his intro, diligent readers who compare the stories to the original magazine pieces will notice they’ve been changed slightly to match the Confederation timeline of the novels.

The Night’s Dawn Trilogy (The Reality Dysfunction, The Neutronium Alchemist, and
The Naked God) plus A Second Chance at Eden and The Confederation Handbook.
Published by Macmillan UK 1996-2000, with matching covers by Jim Burns.

Wikipedia has a handy synopsis of each story:

“Sonnie’s Edge” — set on Earth in the year 2070 and about the fictional sport of beastie-baiting, involving contests to the death between artificial monsters controlled via human affinity bonds.

“A Second Chance at Eden” — a detective story set in the year 2090. It tells about the events leading to the formation of the society that was to become the Edenists. Eden is a bitek habitat which orbits Jupiter, mining the fusion fuel on which Earth is dependent – a mini-nation of radical politics and even more radical technology. Then, one of its co-creators, Penny Maowkavitz, is murdered by one of the affinity-bonded servitor chimps, but nobody can identify the perpetrator – or the motive.

“New Days Old Times” — set in the year 2245. Settlers came to the planet Nyvan hoping for a lifestyle free of Earthbound hatred. Alas, though environments may change, human nature does not.

“Candy Buds” — In the year 2393, the crime lord Laurus rules Kariwak on Tropicana with an iron fist, jealously guarding control of the bitek trade. But when an astonishing new substance appears on the streets, virtual reality takes on an entirely new dimension.

“Deathday” — On the desolate planet Jubarra, a man wages an obsessive campaign of retribution against the last survivor of an alien race. But vengeance can cut both ways.

“The Lives and Loves of Tiarella Rosa” — Set in 2447 on Tropicana, this story is about passion, destiny and cloning.

“Escape Route” — a story about Joshua Calvert’s father, Marcus Calvert, set in the year 2586. In his starship Lady Macbeth, he encounters a long-abandoned alien spacecraft with its escape route intact.

Despite the popularity of the Night’s Shift trilogy, many of its loyal readers are unaware of the existence of a collection of linked tales set in the same universe. 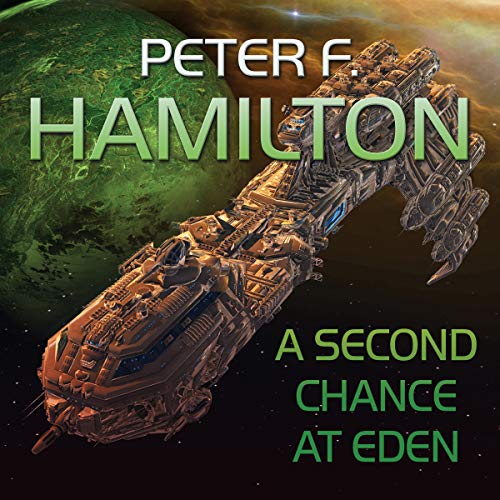 A Second Chance at Eden was reprinted in multiple editions in the US and the UK over the next two decades. Most of them featured Jim Burns’ evocative wraparound cover from the original Macmillan UK hardcover (below), although the cover was flipped for the US release.

A Second Chance at Eden is a solid introduction to the Confederation Universe, and essential reading for any fans of the Night’s Dawn trilogy. It’s also proof (if it were needed) that Hamilton is equally proficient at both shorter and longer lengths. Sadly, he didn’t produce another short story collection until Manhattan in Reverse in 2011.

A Second Chance at Eden was published by Warner Aspect in the US in January 1999. It is 432 pages, priced at $6.50. It was been in print for much of the last 20 years; the first digital edition was released by iPublish in 2000. The cover for the Warner edition (and most of the UK and US reprints) is by Jim Burns.

A Tale That Calls To Mind Classic SF Sagas: The Salvation Sequence by Peter F. Hamilton