If you’re one of the (very few) folks who pay attention when I complain, you know that I frequently lament the decline of the mass market science fiction anthology. Book store shelves used to be full of ’em, and nowadays they’ve all but vanished. Folks don’t have an appetite for short fiction these days, at least not in the way they used to. And that’s a shame — anthologies are a great way to discover new writers, fil the time when you can’t commit to a longer work, and just read some great stories.

Tony Daniel and Christopher Ruocchio previously edited Star Destroyers (2018) for Baen, and with Baen senior editor Hank Davis, Ruocchio has produced nearly half a dozen others, including Space Pioneers (2018), Sword & Planet (2021), and Time Troopers (2022). Last year Daniel and Ruocchio released World Breakers, a collection of original stories of super tanks, and what did I find in my local bookstore last week but a handsome and affordable mass market edition. Civilization isn’t dead after all.

Rick Cartwright reviewed World Breakers for Tangent Online last year, and found lots to enjoy — including stories by Hank Davis, Kacey Ezell, and especially David Weber, whose contribution “may be the finest MilSF short story I have ever read in the fifty-seven years I have been reading science fiction.” Here’s an excerpt from his full review.

Losing comrades in the heat of battle can have profound effects on survivors. Kevin Ikenberry postulates in “Red One” how that might not only push a computerized tank into sentience but to honor its fallen crew’s last orders.

Only Kacey Ezell could weave a strong and canny princess into a story about an intelligent tank. “Daughter of the Mountains” is the chronicle of the growth of an astute thirteen old from precocious princess to assured ruler of her realm and the eight-hundred-and-fifty-year-old sentient tank that aids her and her people to reclaim the heritage lost in a long-ago nuclear war.

“Tanknological Superiority” by Hank Davis may be one of the funniest stories I’ve come across in some time. It takes the alien invasion trope and views it through the eyes of a teenager. A curious, super smart teenager that is an artificial intelligence. Living in the body of an advanced tank.

The author does a deft job of conveying the teenage reaction to events (what’s the most I can say without getting in trouble?) along with the interactions of his scientist “parents” (who are along for the ride and think they are in charge) to life-threatening peril….

“Humanity’s Fist” by Lou J Berger uses a premise favored by several authors in the anthology, the idea of a self-aware battle tank waking up long after the war it fought had ended. Unlike the other tales, Professor is a tank who not only has no desire to go on but is ready to end himself and join his comrades in death. Until a human museum curator offers him paradise.

“Dyma Fi’n Sefyll” by David Weber is without a doubt the best story of the anthology. It is a story about a battle between honor and betrayal. The tale is even more poignant in that corrupt leaders lie to loyal soldiers in order to destroy their own ruler and all that stands against the evil is a good tank that refuses to do nothing.

This may be the finest MilSF short story I have ever read in the fifty-seven years I have been reading science fiction. It alone is worth the price of the book.

As Toni Weisskopf makes clear in her entertaining introduction (without actually saying the word “Bolo”), World Breakers is inspired by Keith Laumer’s tales of sentient tanks, immortalized in his classic 1976 collection Bolo, and its many sequels. 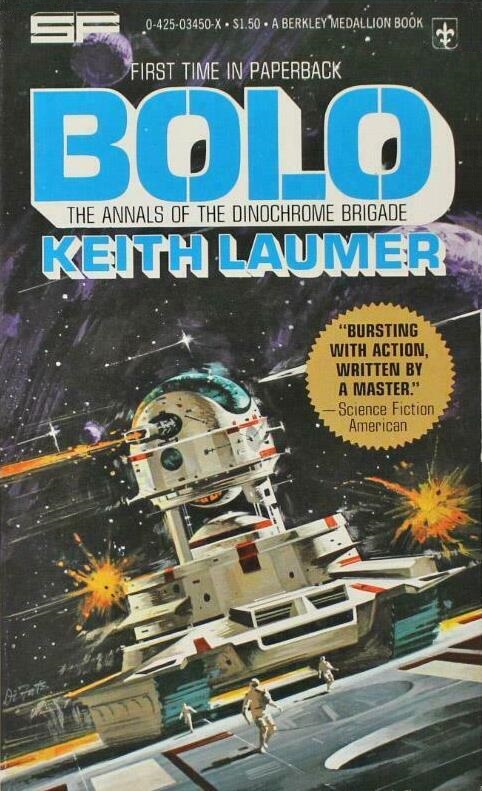 Introduction by Toni Weisskopf
“World Enough” by Robert E. Hampson
“A Tank Named Bob” by Larry Correia
“Red One” by Kevin Ikenberry
“Daughter of the Mountains” by Kacey Ezell
“Tanknological Superiority” by Hank Davis
“Harvester of Men” by Tony Daniel
“Amarillo by Fire Fight” by Keith Hedger
“Anvil” by Wen Spencer
“Good of the Many” by Monalisa Foster
“The Prisoner” by Patrick Chiles
“The Dragonslayers” by Christopher Ruocchio
“Humanity’s Fist” by Lou J. Berger
“Dyma Fi’n Sefyll” by David Weber

Tony Daniel and Christopher Ruocchio, together and with Hank Davis, have edited some of the most enjoyable recent anthologies on the market, all with Baen. Here’s a look at a few.

Here’s the recent Baen anthologies from Daniel and Ruocchio, most done in conjunction with Hank Davis. Links will take you to our recent coverage.

World Breakers was published in trade paperback by Baen Books on August 3, 2021, and reprinted in mass market on July 26, 2022. It is 355 pages, priced at $16 in trade paperback, $8.99 in paperback, and $7.99 in digital formats. The cover is by Dominic Harman. Read a generous excerpt, including the first two stories, at the Baen website.

There is an earlier anthology from Baen, edited by John Ringo. CIITIZENS features a Keith Laumer story – Field Test – which would probably have fitted well here if it hadn’t already been deployed.

Oops! The back cover illo is the trade paperback edition (price $16.00), but I did check and there is a mass market edition (price $8.99). Hallelujah! Definitely the kind of sf/f book I would buy and stick into a rear pocket of my jeans for instant great-read-ification, back in the day.

Just maybe the mass-market sci-fi anthologies petered out partly due to the passing of the prolific anthologist Martin H. Greenberg in 2011.