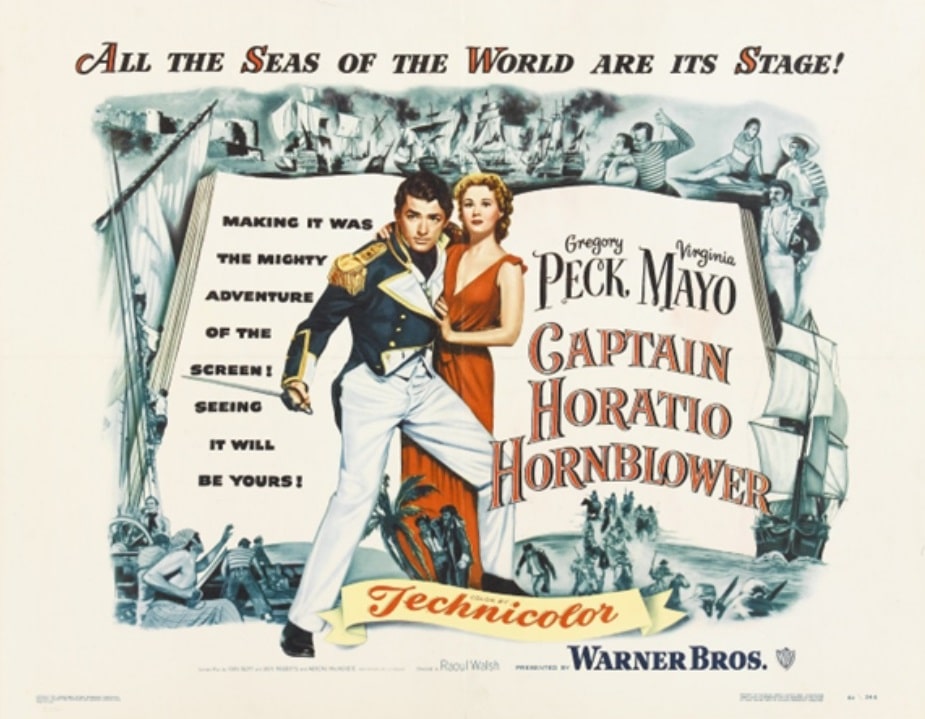 The Age of Sail lasted almost three millennia until wind power was replaced by steam in the late 1800s — a time that, in the mid-twentieth century, was still within living memory. Swashbuckling sea stories are still with us, but as a subject for big-budget movies, they peaked in the early Fifties. Like Westerns, many of these sea stories followed formula, and while some were great, most were considerably less than that. Let’s look at three cutlass-swinging adventures from 1951-52, two of which are worth watching even seventy years later. Out swords and pistols, me lads, and prepare to board! 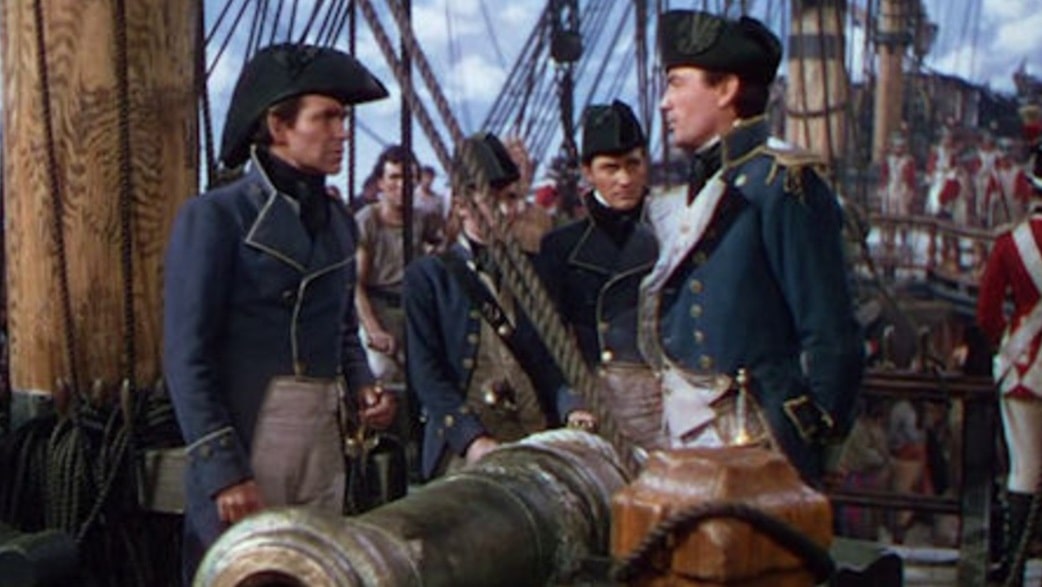 Drawing from three of the Hornblower novels by C.S. Forester, this movie is easily the best depiction of Napoleonic-era naval warfare until, well, the British TV Hornblower adaptations in the late Nineties. It also works as a character study, as a romance, and an unflinching reminder of the high human cost of war. Forester himself plotted the adaptation, though the script was handled by three Hollywood screenwriters.

The film was originally developed as a vehicle for Errol Flynn, but after the disappointing reception of The Adventures of Don Juan Flynn was passed over, and the movie stars Gregory Peck as Royal Navy Captain Hornblower. It’s a great choice: Peck, though not English, has the sort of awkward grandeur the role requires, formal and severe on the surface but gnawed by doubt underneath. Hornblower wins his battles against the odds by outthinking his opponents, and Peck deftly conveys the character’s native intelligence. Plus, he just plain looks great in a Royal Navy captain’s rig, like a statue from the Admiralty come to life.

The story is wide-ranging, from the tropical Pacific to the cold North Atlantic, and if it has a flaw it’s over-ambition, cramming in a midnight boarding expedition, a gun duel between ships of the line, a mad warlord, a jealous commodore, imprisonment and escape, a ship hijacked from port, and a surprise attack on an anchored French squadron under the guns of a cliff-top fortress — all in just under two hours. Somehow there’s still time for character development, camaraderie among the English officers, and the mourning of losses after the battles. Credit must be given to veteran director Raoul Walsh for keeping all these elements moving swiftly and coherently without ever feeling rushed.

And we haven’t even gotten to the romance yet! The changing politics of war mean that Lady Barbara Wellesley (Virginia Mayo) needs a sudden ride out of Panama, and Hornblower’s is the only English ship for thousands of miles, so he’s stuck with carrying her around the Horn and back to England. Lady Barbara shows courage and heart by caring for the wounded during battle, Hornblower returns the favor by personally nursing her through a bout of debilitating tropical fever, and love blooms. But they’re adults with commitments, neither one is free, and obstacles must be surmounted.

Mayo, who in a lightweight part could sometimes rely on her smile and phone it in, excels herself here as Lady Barbara, showing how well she can act when she’s engaged with the role. That, and her genuine chemistry with Peck, really make the love story work. But of course, Forester had a feel for stories of strong women romancing eccentric captains: he also wrote The African Queen. By the way, watch for Christopher Lee as a Spanish captain fighting a fierce cutlass duel with Hornblower — he’s the only guy in the movie who’s taller than Gregory Peck. 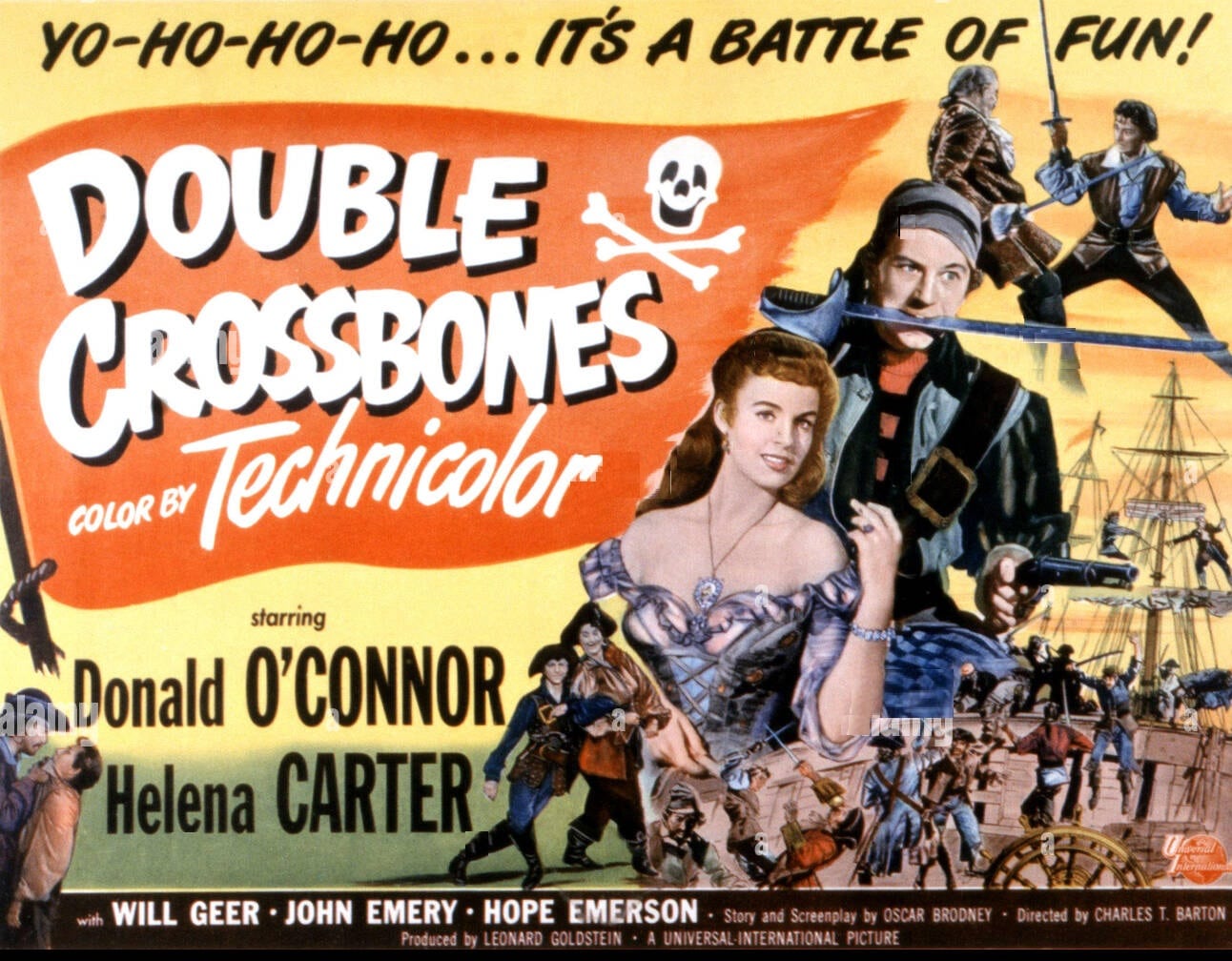 This isn’t the first pirate comedy, and it’s far from the last, but it’s even farther from the best. Musical star Donald O’Connor, his career apparently on the downslide, appears as the Charleston shop boy David Crandall, who by a series of accidents becomes pirate captain Bloodthirsty Dave — and that name, I’m sorry to say, is the best joke in the picture.

Production values are decent, and the Technicolor is lush, but the story is laughable without being funny, and the songs are weak: O’Connor sings, dances, and romances the ward of the corrupt Carolina governor, all the while looking vaguely embarrassed. It’s notable that when Bloodthirsty Dave gets to Tortuga to join the Brotherhood of the Coast, his fellow captains include pirates from many eras: Blackbeard, Captain Kidd, Henry Morgan, Anne Bonney, and Long Ben Avery.

Clearly time travel is involved; you might want to borrow some of that so you can get to the end of this quicker. 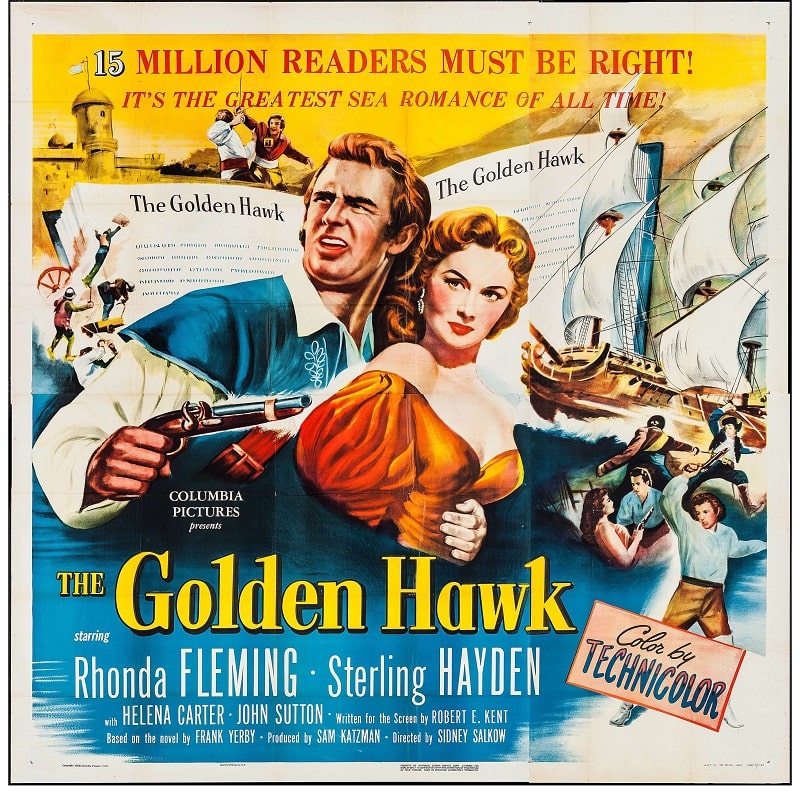 Top-billed Rhonda Fleming gives Maureen O’Hara and Jean Peters serious competition here for the crown of Queen of the Swashbucklers, missing out only because she never picks up a sword. If you can swallow the ultra-American Sterling Hayden as a Frenchman, you’ll have a fine time with this classic Hollywood pirate adventure.

It’s based on the bestselling novel of the same name by Frank Yerby, who wrote romantic historical potboilers that were ideal for adaptation to the screen. Setting: the Caribbean in the late 17th century, and Kit Gerardo, known as Captain Hawk (Hayden), is a French privateer who’s in it mainly in hopes of meeting — and killing — Spanish Captain Luis del Toro (John Sutton), whom he blames for his mother’s death.

He finally catches up to del Toro’s galleon and is pounding its sterncastle from his more maneuverable ship when a female prisoner (Fleming) escapes the Spanish brig, swims to Gerardo’s ship and tells them to knock it off, as the Spaniard is loaded with innocent captives. Gerardo sheers off, takes the woman aboard, and is smitten. After several nights he makes a pass at her, but she shoots him in the shoulder and then dives overboard, swimming for a nearby island, leaving a note identifying herself as Captain Rouge, the notorious female pirate. Scuppered, bigad!

Aye, it’s a love/hate relationship, and there are further complications when Gerardo captures Bianca del Valvida (Helena Carter in a strong performance), Captain del Toro’s promised fiancée. Gerardo holds Bianca for ransom long enough for her to fall for the bluff privateer, which will lead to jealousy, deceit, and Bianca’s unexpected hand in Gerardo’s reconciliation with Rouge.

Director Sidney Salkow shot more than fifty Hollywood B-movies, but this may be his best. You have to love a movie that opens a piratical raiding montage with flame consuming a map of Jamaica! This is sheer melodrama but a good one, and if no character is any deeper than they seem, it’s only because more character development would just slow down the action. Gerardo’s tactics are superb when he has only Spanish enemies to deal with, but when the ladies are involved love clouds his mind and he goes all stupid; he decides to infiltrate the fortified Spanish port of Cartagena on his own, gets captured, and Bianca and Rouge have to pull his chestnuts out of the fire.

There’s a best-of-class climactic battle between a fine flotilla of miniature French ships and a miniature Spanish fort, backstory revelations that will surprise no one who’s familiar with the genre, and a final, lingering kiss so hot that Captain Rouge’s flintlock pistol drops, forgotten, from her languishing fingers.

I’m fond of Donald O’Connor, but if I have to have a pirate comedy give me The Princess and the Pirate with Bob Hope (and Virginia Mayo).

Horatio Hornblower is an underrated movie, one of Raoul Walsh’s best.

One of Gregory’s most dimensional performances (‘hrrrm!’) – although maybe not as dimensional as his Ahab.

Growing up, the Hornblower books were favorites. I just revisited them a year or two ago and they still held up. Not sure if I ever saw the movie; I’ll have to do something about that.

The Hornblower movie blew me away when I saw it on TV. Until then I had never heard of CS Forester. My mom pointed out one of the abridged readers digest books on a shelf and I consumed The Happy Return and later on most of the others from library and the kindness of my great uncle who gave me his partial collection. The other two books the movie covered were A Ship of the Line and Flying Colours if memory serves.

So this movie started me on a long romance with the era of wooden ships, especially Alexander Kent’s Richard Bolitho books.

Fans will have no doubt watched the Hornblower TV film series starring Ioan Gruffudd. Anyone interested would be well served watching.

Another Ellsworth’s Cinema of Swords? Hornblower & Red Rhonda? Sink Me!

Peck as Hornblower has long been a favorite of mine, but I’m not familiar at all with the other two. I like Donald O’Connor, but I’ll give Double Crossbones a pass. The Golden Hawk on the other hand sounds like it is worth a look; the gorgeous Rhonda Fleming is worth a lot more than just one look, of course.