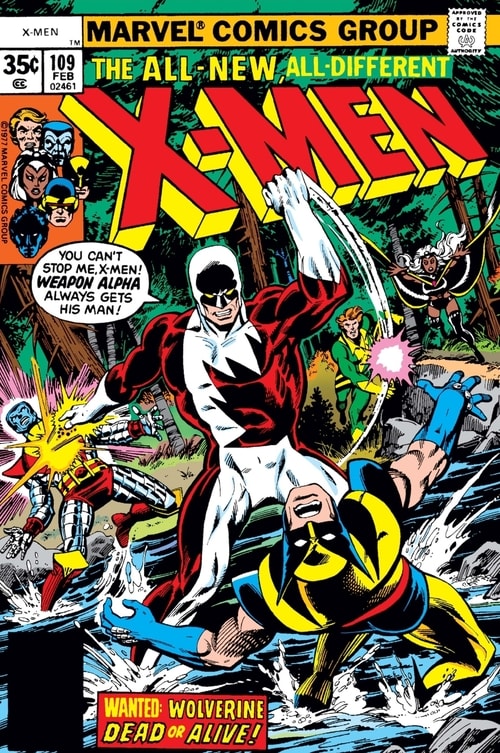 So issue #109 is a bit of catching up and consequences. One of the most important events that needs to unspool its consequences is the resurrection of Jean Grey as Phoenix. No one on the X-Men has had time to process it and Jean revealed herself as Phoenix to her parents when she fought Firelord. Jean’s coming out conversation with them not only has to reveal that she’s not the girl her parents thought she was, but she never has been, even before she arrived at Xavier’s school in issue #1.

Nightcrawler is the most empathetic of the X-Men, maybe rivalled by Ororo. He notices that Scott isn’t dealing with the Jean-to-Phoenix situation very well either. The heart-to-heart Kurt is trying to have with Scott gets interrupted though, when Banshee invites them all to go to a lake for the afternoon. This is more Claremont-esque sustaining the tension of problems for resolution in other issues (other years!). 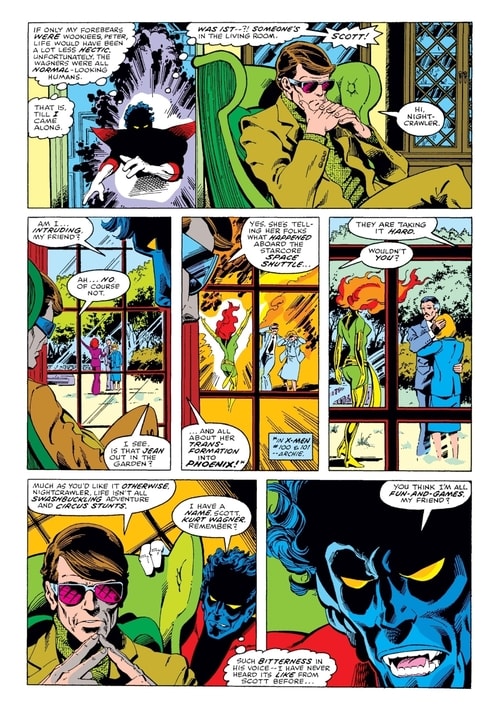 Banshee, Storm, Colossus and Moira MacTaggert go to the lake for some well-earned rest, only to be surprised by a mysterious maple-leaf bedecked superpowered being who knows Wolverine and is coming to take him back to Canada. This is our first look at Weapon Alpha (Wolverine had been Weapon X), who will later be renamed Vindicator in 1979 before taking the name Guardian in the pages of Alpha Flight in 1983. 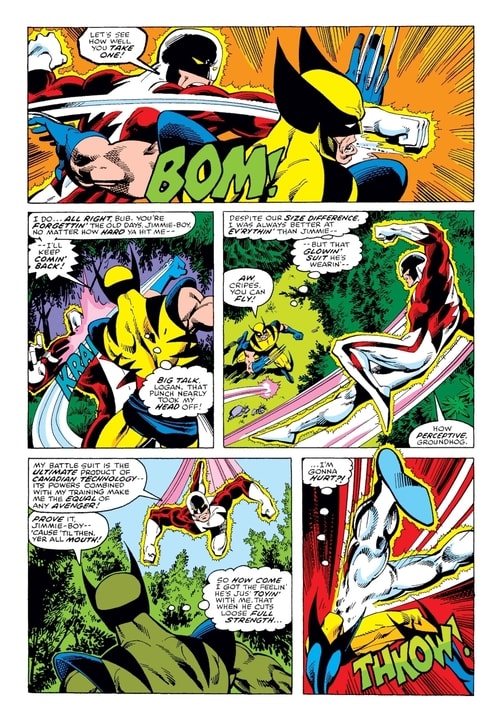 It is a delight to see Weapon Alpha realize that Wolverine wasn’t alone and that he’s outclassed. The Canadian government’s desire to get Wolverine back will is a fun, low-level, on-and-off subplot that won’t finish until Uncanny X-Men #140 in 1980. 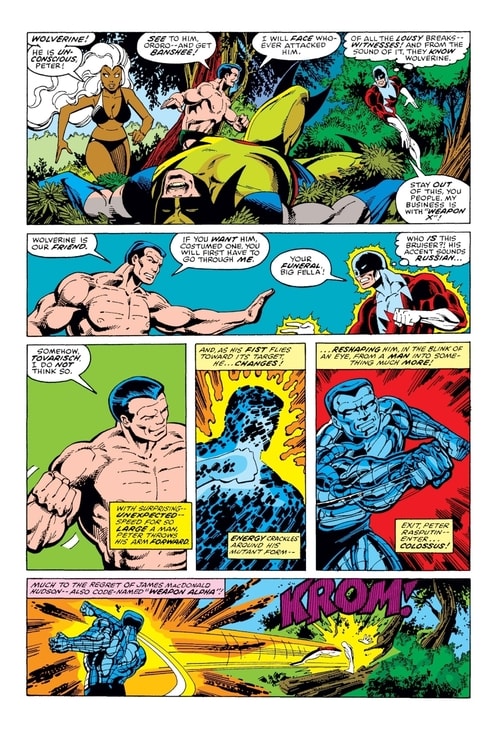 Thematically, Iron Fist #15 is a guest appearance that continues this break from being hunted that allows the X-Men to be regular people. And it’s an unadultered delight. 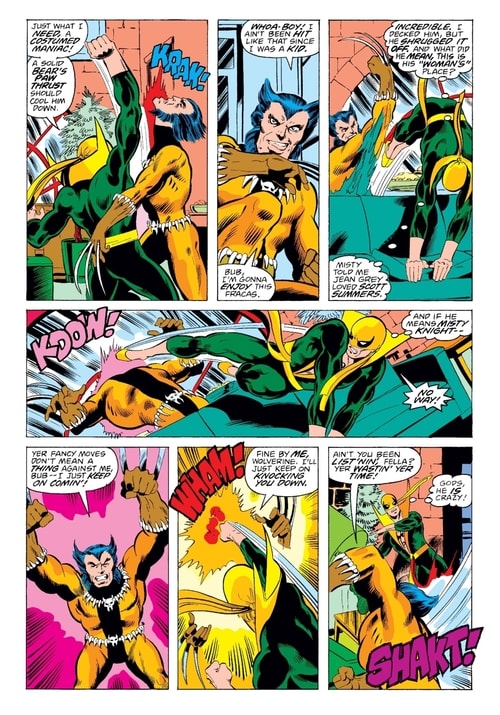 A bit of background: although I love, love, love the 2006-2009 Brubaker-Aja Immortal Iron Fist, the 1980s Power Man and Iron Fist wasn’t a title that interested me as a kid. I never bought it off the spinner racks and only owned one second-hand issue. Its dual tonal roots in Kung Fu movies and Blaxploitation movies were far enough from my experiences growing up outside of small town Ontario that I didn’t know how to even begin to read it. However, Byrne and Claremont helmed the Iron Fist run from 1975-1977 and it’s fair to say that I would follow that creative team almost anywhere. I wasn’t disappointed in their work on issue #15 when the X-Men make an appearance.

It’s a pretty standard cross-over with mistaken identity and intentions, much like Nightcrawler’s appearance in Len Wein’s Amazing Spider-Man I discussed a couple of posts ago. But in this case, Claremont and Byrne take care of real character development in the guest stars rather than making it a skippable issue.

Nightcrawler, for example decides to get rid of his image inducer and accept who he is. Moira and Sean start discussing whether they should be a couple or not. Wolverine’s torch for Jean, first introduced in issue #101, gets a little hotter. And Scott and Jean buy groceries like a regular couple.

Wolverine starts the story off by apparently stalking Jean, waiting outside her apartment, thinking about how she should be with him instead of Scott. He sees Iron Fist sneaking into Jean’s apartment, and goes full psycho and attacks with claws extended. It turns out all the X-Men are arriving, because Wolverine wasn’t stalking Jean, but was waiting for her dinner party to start. 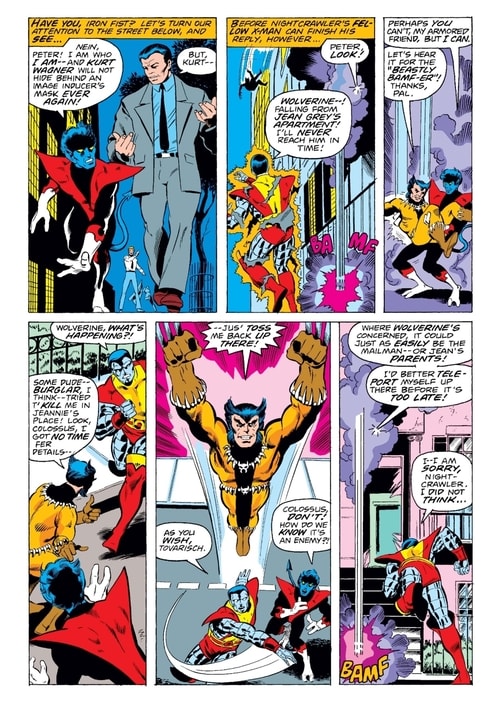 The X-Men find Iron Fist and Wolverine in pitched battle and join in. Iron Fist holds his own pretty well, and one of the funnest moments of the issue is when Ororo guest hit by a flying bowl of potato salad and all the boy X-Men have this ‘oh crap’ moment, much like the one that Weapon Alpha had when he got her mad. 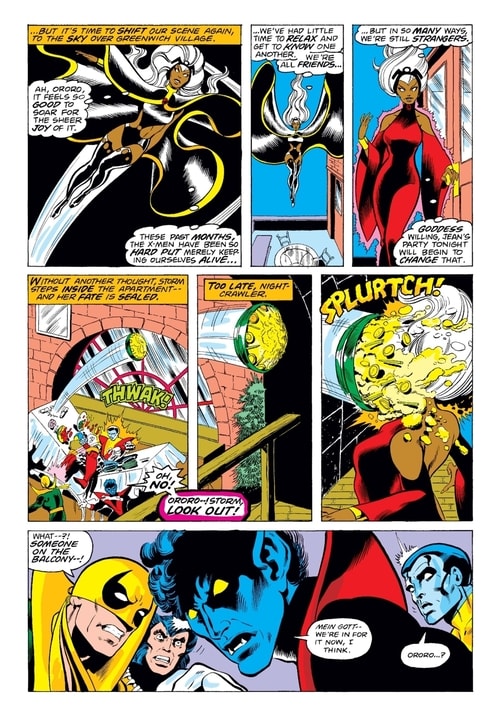 The misunderstandings are sorted out by the arrival of Phoenix, who reveals to her friends that Iron Fist is actually her roommate’s ex-boyfriend. It’s a super-fun issue. 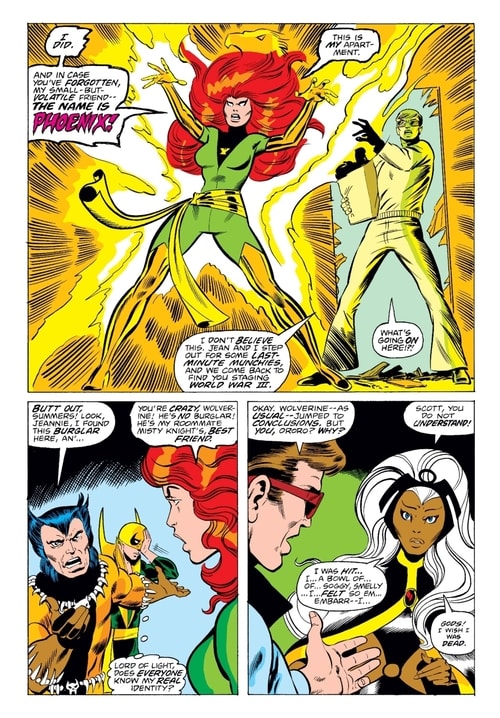 The X-Men make a few other guest appearances in this period. I don’t know if Marvel editorial was trying to pump up X-Men sales, but the art and writing are all so bad as to make the characters almost unrecognizable, and certainly not enjoyable for this X-Men fan. In the first, Marvel Team-Up Annual #1, by Mantlo (writer), Buscema (penciller), Esposito (inker), the X-Men happen to be on a plane with Peter Parker headed towards some sort of nonsensical mad scientist event.

I already mentioned in previous posts that neither Buscema nor Esposita would ever be my choice to draw the X-Men; compare the below page to the Byrne work on the stands around the same time.  The costumes have mistakes, the art has short cuts, the most powerful character on Earth (Phoenix) runs around in a mini-skirt while her male companions get costumes. Eminently skippable issue. 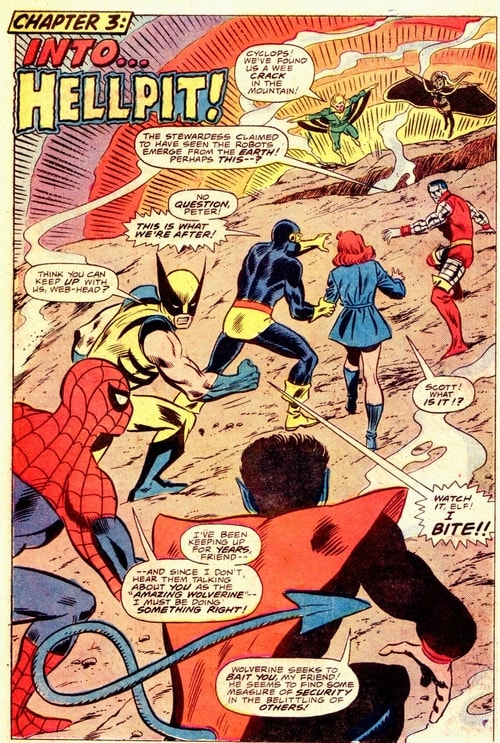 In Marvel Team-Up #53, during a Spider-Man/Hulk “team-up” the X-Men get a cameo. This story isn’t important to understanding the X-Men history and development. History-wise this was still a year before Byrne would join the X-Men creative team, so this was the first time Byrne ever got to draw the X-Men.

With its January, 1977 cover date, it seems plausible that mixing X-Men with Spider-Man was probably an attempt to get more the MTU readers to check out the X-Men title. I wondered briefly if that was why the Hulk was there too, but this is almost a year before Hulk-mania caused by the emerald goliath’s 1978-1982 TV series. The Hulk was big enough that during his TV series that he ended up on a lot of Marvel covers. But in early 1977, the X-Men would have been riding Spider-Man’s coat tails.

The X-Men also made a weird black and white appearance in The Rampaging Hulk #2. Some of you will recall that Stan Lee was test-driving the magazine market in the 1970s with edgier, more sophisticated art and stories. These magazines not covered by the comics code included Savage Tales, Dracula Lives, Tales of the Zombie, Planet of the Apes, and The Savage Sword of Conan.

Moench wrote the story, with art by Simonson and Alcala (weird pairing!), but for some reason it’s a throw-back issue, to the original X-Men, and not just a little bit in the past but in their original costumes from the first thirty-eight issues. I didn’t finish the story. 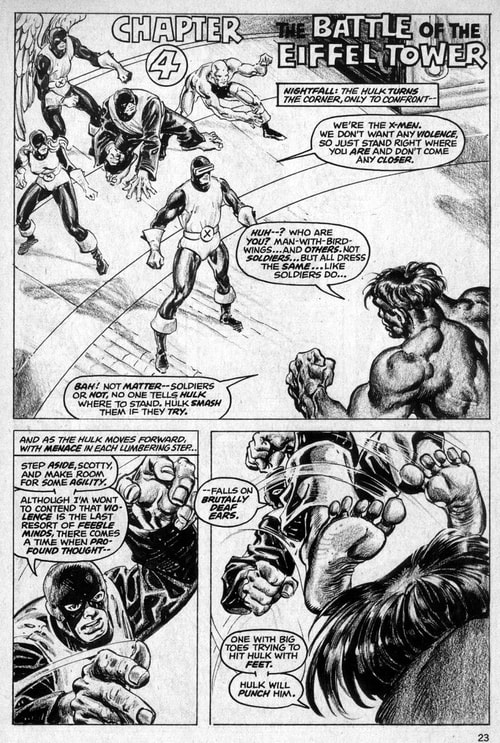 The last issue I’m going to touch is also a fly-over. For X-Men #110 Claremont wrote a mansion invasion story. I don’t know what was up with Byrne that month. He’d only done two issues of the bimonthly X-Men. Maybe he was finishing up his work on Iron Fist, or maybe he was busy on Marvel Team-Up.

Tony DeZuniga handled the art for #110, and he’s completely inappropriate for the title (below). DeZuniga was the first of the wave of Filipino artists in the same way as Alan Moore was the first of the British wave. DeZuniga co-created Jonah Hex and had a huge portfolio of DC work, but he isn’t a Byrne or Cockrum any more than Brown and Sutton (fill-ins for X-Men #106) were. I skip would not buy this issue for my collection. 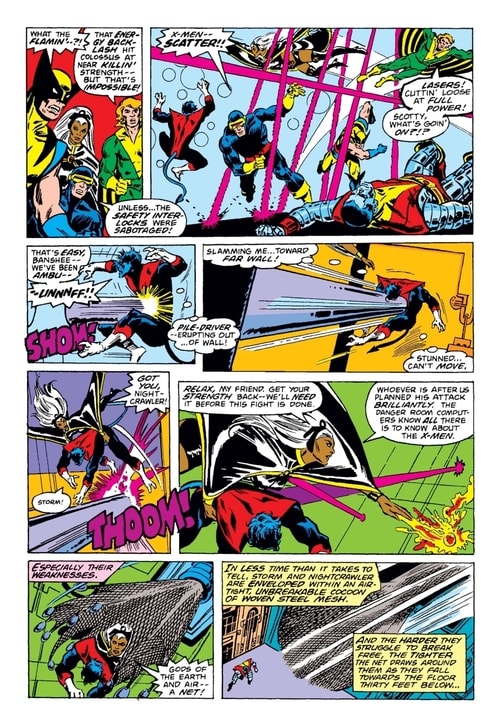 Only one story-related thing happens in this issue. The mansion-invader is actually revealed about two years later to have been in the employ of the Hellfire Club, who begins to study the X-Men. I can only assume that Claremont didn’t have this grand arc in mind; he famously left himself lots of plot threads that he could go back to later to tie up. It’s neat to watch.

This was a mixed bag of X-Men history, but I’m glad I looked at all of these. We’ll be back to an extraordinarily high-quality run next time with Uncanny X-Men #111, when Magneto is back.

Derek Künsken writes science fiction in Gatineau, Québec. His first novel, The Quantum Magician, a space opera heist, was a finalist for the Locus, Aurora and Chinese Nebula awards. Its sequel, The Quantum Garden was an Aurora finalist as well. His third novel, The House of Styx, got a starred review in Publishers’ Weekly and is out in audio and ebook (pre-order link). The hardcover will release in April, 2021.

I didn’t know about the Rampaging Hulk appearance.

Marvel needs to ad Rampaging Hulk to MU. Its only been reprinted in the essentials book and i don’t think book is worth tracking down just for that. Its a neat concept though, covering the time between Hulk #6 and his TtA run.

I had all the new X-Men including this Iron Fist issue. They were in a cardboard box, safely stowed on a high shelf in a closet. Somehow (perhaps by teleporting like Nightcrawler), my cat Shadow got up there, into the box, and chewed up this very issue.

> Somehow (perhaps by teleporting like Nightcrawler), my cat Shadow got up
> there, into the box, and chewed up this very issue.

I had something similar happen to a copy of Dynamo Joe in the mid-80s. So many ways comics can come to a bad end….

Hey Glenn! Me neither! I never read Rampaging Hulk, so knowing it occupied a particular period now makes that appearance more understandable. The reading order guides I was using should have placed that one somewhere in the first ten issues of X-Men then?

Robert: Rough! I once shredded the corners of a bunch of issues riding my bike and carrying comics to my friend’s house in a grocery bag that swung into the spokes. I was so upset. Solidarity.

John: There’s a metaphor in there that has something very important to say about comics 🙂

Thanks for posting all this! I was in High School/College when these X Men came out and I don’t remember knowing about, let alone reading, the Iron Fist crossover! Looks like loads of fun!

Hey Jeff! I thought I’d read almost all the X-Men from the Bronze Age to about 1991, but I’m following a few online reading order lists and finding more than a couple guest appearances that are great! Right now I’m reading another cross-over with Iron Fist (Power Man and Iron Fist #57) for next week’s post 🙂