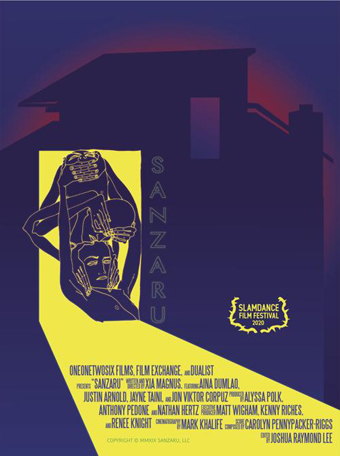 The Japanese image of the three wise monkeys is as early as the 16th century: one monkey with hands over eyes, the next with hands over ears, the third with hands over mouth. See no evil, hear no evil, speak no evil; thus the monkeys’ names, Mizaru, Kikazaru, and Iwazaru, ‘not-seeing,’ ‘not-hearing,’ and ‘not-speaking.’ There’s a pun in Japanase on zaru, not, and saru, monkey, so collectively the trio’s simply ‘three monkeys,’ or sanzaru.

Thus the title of Sanzaru, an American horror movie that played at Fantasia. It’s one of several ghost stories from this year’s festival: one of several films about a house, and an old person dying, and the family that returns to them. In this case, though, the point-of-view character is the patient’s nurse. Dena Regan (Jayne Taini) is an old woman dying in her Texas estate, and a Filipino nurse named Evelyn (Aina Dumlao) has moved in to care for her. Along with Evelyn comes her young nephew Amos (Jon Viktor Corpuz); also present on the estate is Dena’s son Clem (Justin Arnold), and as well Dena’s daughter Susan (Tomorrow Shea) visits for a minor part in the story. Things go missing; Clem sinks further and further into depression; Dena’s mind deteriorates; old secrets come to life. And there are presences in the house from beyond the grave.

We know from early on that there are ghosts; we get their perspective in an early scene. We know that one of them is named Mr. Sanzaru, but the relevance of the name doesn’t become clear until much later in the movie. And it is then we understand or fully feel the themes of the story: the importance of knowing and confronting wrong things, not just to stop wrong things from happening but to be able to move on from them.

The number of ghost stories at Fantasia 2020 gave me the chance to see how similar material takes different shapes in different stories; to see how the genre works. Every story has a specific tone, partly a mechanical function of pacing and lighting and editing rhythms, and partly from the character of the specific haunted location. But different stories have different themes, different things on their mind. Sanzaru’s interest is in secrets and how they come out; in how dark things in the past, left to fester, can limit the future. 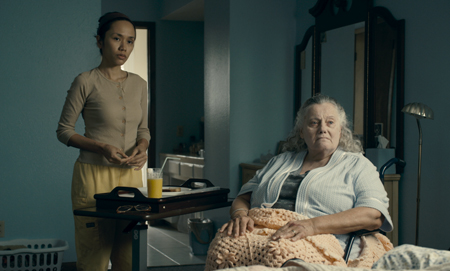 This thematic coherency means some revelations late in the movie work even if unexpected. One, about Evelyn and Amos, has had groundwork laid. Another, about why one of the ghosts is named Sanzaru, hss not, and is much greater and darker. But it feels coherent in a way that a twist late in a film usually would not. We’re prepared for it by the movie’s coherency of theme.

Likely also by the coherency of the atmosphere, which is tied to the natures of the Regans and against which Evelyn and Amos react. Dena’s home is large enough to feel sprawling, but it’s also mundane. There aren’t any creaking doors or cobwebs or traditional paraphernalia of haunted dwellings. There are shadows, quite a lot of those, but these are the shadows of abandonment and disorder. There’s a cool-coloured dinginess to the house, a mundanity, in keeping with the day-to-day hopelessness of an old woman whose mind is progressively deteriorating.

Even the ghosts at their most dramatic are low-fi visual effects. It works, simple effects being sometimes oddly powerful. Narratively, they’re both present to the audience and also slow-played. Even when their world impinges on the characters, we don’t entirely understand why or who they are. Explanations are forthcoming, for the patient, but for much of the film we know more than the characters but less than all there is to know. This sort of doubled consciousness is not uncommon, but it works here in a way specific to horror movies: we know just enough to know better than the characters what there is to fear around them. And yet we are surprised with them to learn the things that come to light. 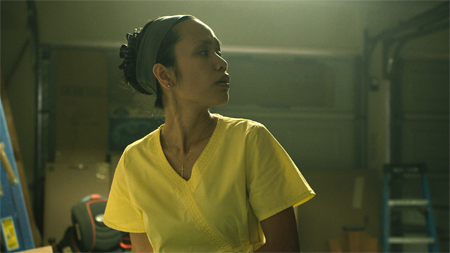 TTere’s a classical approach to the ghost story in Sanzaru. Events unfold at their own pace. There’s minimal blood. Even the atmosphere is less menacing than it is brooding. Character predominates.

Luckily, the character work here is strong. Dumlao’s Evelyn is the centre of the film, and she does a strong job showing a professional woman who is frustrated with her own family entanglements while also feeling her way in dealing with another family in another culture. And her chemistry with Justin Arnold is strong in unusual ways; their relationship’s complex, Clem being introverted and awkward and twice her size, but finds an interesting balance. The writing’s very strong, giving the actors a lot to work with, but the playing and directing of the scenes between the two of them is what’s most striking.

The film touches on a lot of different issues. Evelyn’s ethnicity does not go unnoticed in a largely-white rural Texas area. Themes of colonialism are hinted at in a number of ways. Clem’s a veteran marked by his time in Afghanistan. In big ways and small, in personal ways and world-historical ways, the characters are scarred by history. The challenge is to recognise those scars, and to speak of them. 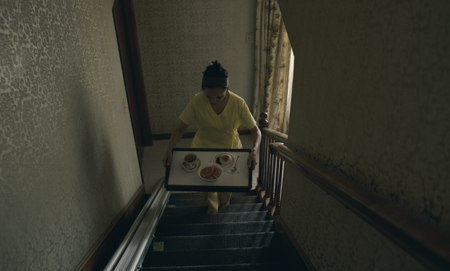 In the long run, the task for characters trapped (literally or metaphorically) in a house troubled by ghosts (literally or metaphorically) is to escape. The way to escape will vary with the character of ghosts. So one way to look at a ghost story, one way to determine what is specific to it, to find its character, is to work out what ways the characters have to escape. Those paths may end up not being taken. But narratively and architecturally a haunted house is partly defined by the way out of it. You can see the way to get out of the horror of Sanzaru. And the characters that take that exit are the ones you expect. There’s sadness here, but also some light among the long shadows of Dena Regan’s house. Not all ghosts are necessarily malign; and part of what the film has to say is that we must let go of some of them much as we try to get them to let go of us.