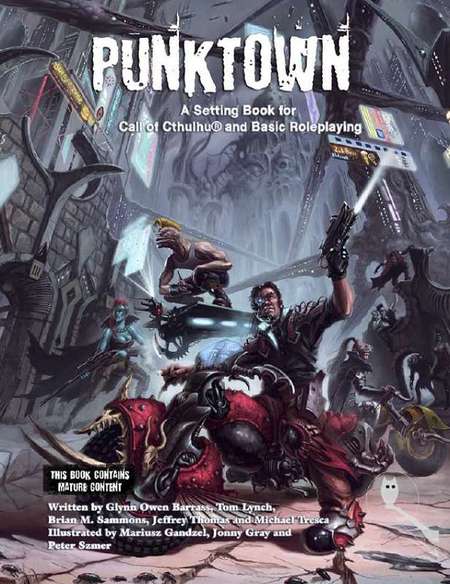 Punktown: A Setting Book for Call of Cthulhu and Basic Roleplaying

Many many, oh-so-many years ago, I wrote an excited blog post about the planned final game release from Miskatonic River Press, which was slowly winding up operations. It was a Kickstarter-funded Call of Cthulhu setting book based on the setting for Jeffrey Thomas’s dark urban fantasy series Punktown. Here’s what I said, in part.

I’m a huge fan of Miskatonic River Press, and it’s great to hear they have something new in the works. They’ve produced some really terrific Call of Cthulhu products, including New Tales of the Miskatonic Valley, Our Ladies of Sorrow, and their Roman-era adventure The Legacy Of Arrius Lurco…. if Miskatonic River has to end their illustrious publishing career with one book, I’m pleased it’s this one. I think Thomas’s dark-future urban setting will make a terrific locale for a rockin’ CoC campaign.

Well, it was not to be. The years rolled by, and Punktown never surfaced. The illustrious Miskatonic River Press finally closed up shop, and I silently grieved for another Kickstarer destined to never see the light of day.

Or so I thought. And then, just last week, I stumbled across a reference to it. Punktown did in fact exist, in PDF and print-on-demand formats, and it was being offered for sale at both DriveThruRPG and Lulu. It had stealthily been released in 2018 by designers Chronicle City and Miskatonic River Press. Praise Nyarlathotep!

What’s so wonderful about the setting for Punktown, then?

For that I’ll take you back to the source material, written by Jeffrey Thomas.

Skyscrapers with sides so smooth and featureless (with vidscreens on the interior, instead of windows) that one might think they were solid granite monuments in a graveyard for dead gods. Other buildings that looked like they’d been pieced together from thousands of odd-matched parts salvaged from stripped factory machines, steam curling out of grids and grates in their complex flanks. Buildings with snake skins of multicolored mosaics. Buildings wearing an armor of riveted metal plates, like retired warships looming vertically with their sterns jammed into the street. Flat roofs upon which perched smaller buildings, symbiotically. Other structures tapering to needle points that seemed to etch the clouds upon the blue glass of the sky. Stacked apartments. Stacked businesses. On street level: shop fronts, and gang kids squatting on tenement steps, glaring insolently at the slow sludge of traffic… Ah, Punktown.

There are some truly unique settings for Call of Cthulhu or course, such as Cubicle 7’s excellent Cthulhu Britannica, Modiphius’s World War II-era Achtung! Cthulhu, Wildfire’s gloriously gonzo anime-style mecha crossover CthulhuTech, and the Victorian-era Cthulhu by Gaslight from mother Chaosium. But Thomas’ elaborately constructed and gorgeously imaginative fantasy city of Punktown, the setting for some half a dozen books including Punktown (2000) and Blue War (2008), is an inspired choice.

That’s not the only reason I’m pleased to see it, of course. I purchased virtually every gaming product from Miskatonic River Press as they were released, but it’s hard to recommend them to my fellow fans these days — they’re all out of print, and prohibitively expensive in the aftermarket. It’s rare to see any of their earlier offerings listed on sites like eBay for under $100-$150, especially Tales of the Sleepless City, which had a very low print run and is rarely listed at all.

But Punktown is available in PDF and print-on-demand, so it’s nice to finally have an example of their handiwork which is widely available.

A few previous releases from Miskatonic River Press: New Tales of the Miskatonic Valley,
Our Ladies of Sorrow, Cthulhu Invictus: The Legacy Of Arrius Lurco, and Tales of the Sleepless City

Punktown: An RPG Setting for Call of Cthulhu Sixth Edition and BRP uses Chaosium’s famous award-winning system to explore a dark, futuristic world fraught with untold perils created by author Jeffrey Thomas. Imagine Blade Runner, The Fifth Element, Minority Report, Total Recall and the rest of the dark, not-too-distant-future genre. Now add aliens, mutants, robots and Lovecraftian horror. Blend them together, and you get a hint of what Punktown is like. This reference explores the city itself, the alien races, the weaponry, the creatures, mutations, cybernetics, drugs, sanity (and the inevitable loss thereof), and the options of adding the Cthulhu Mythos into the mix. As written in Thomas’ work, the mythos is already there, threatening life as Punktowners know it. If you’re a cyberpunk fan, if you’re a horror fan, or if you’re both, this book is for you. THIS BOOK CONTAINS MATURE CONTENT

The reviews for the book praise the way it’s captured the bizarreness of the setting. Here’s a clip from a lengthy review at RPG.Net.

Where does Punktown score?… it does a superlative job of evoking its setting. For fans of the Punktown universe, that’s a no-brainer. For the broader gamer audience, Punktown serves up a smorgasbord of playable alien races, with deliriously diverse physiques and sexual habits, from the hedonistic, masochistic Bliss, “like like a stingray grafted onto the hind legs of a shaved goat,” to the towering, ferocious Stem, “with no part of their body larger in circumference than a drinking straw.” The weapons, equipment, drugs and body mods provided to deal with such a menagerie are correspondingly baroque and bizarre. In fact, the main objection that a veteran CoC game is likely to have is that the canonical Cthulhu Mythos monsters, whether ichthytoidal Deep Ones or cephalopodic Cthulhu itself, are liable to seem tame and pedestrian in the Monstrocity….

Obviously this is a very subjective judgment, but it looks to me like Punktown is the logical far-future progression of Delta Green… It’s light on mechanics, but dripping with setting-specific juice. It carries a Mature Content warning for a reason. Diehard Gernsback space opera fans might be disappointed, but post-William Gibson cyberpunks will find a game world they can readily identify with…

Punktown was written by Glynn Owen Barrass, Tom Lynch, Brian M. Sammons, Jeffrey Thomas, and Michael Trescak, and published by Chronicle City and Miskatonic River Press in 2018. It is 156 pages.

It is available in PDF format at DriveThruRPG for $15 (note: due the the Adult Content warning you’ll need to sign in); and in print-on-demand at Lulu for $35.41.

I discovered Punktown a couple of years ago. Add bizarre aliens, clones, robots, mutants, noir and weirdness then blend then you might have something that approaches the awesomeness that is Punktown.

I wish I discovered Punktown earlier but I still have many unread novels and collections to look forward to.

I imagine that Punktown would be a rich setting for a RPG especially with a creative DM.

I wish it had gotten more publicity at launch. It took me two years to find out about it.

I backed this on Kickstarter, and I was pretty darn surprised when it finally released… and mostly uninterested. I only backed for the pdf copy, and I suppose it’s sitting in my dropbox folder for when I feel like taking a look.

This is always a problem with kickstarters that take so long to produce – the excitement and interest have faded into resentment and neglect.

Hey John — this ended up appended to the wrong article!! It was supposed to be attached to the Heinlein piece. Any way you can move it? My apologies!!!

I had to log in to your account, which probably meant WordPress kicked you out while I was doing it. Hope that wasn’t too alarming!