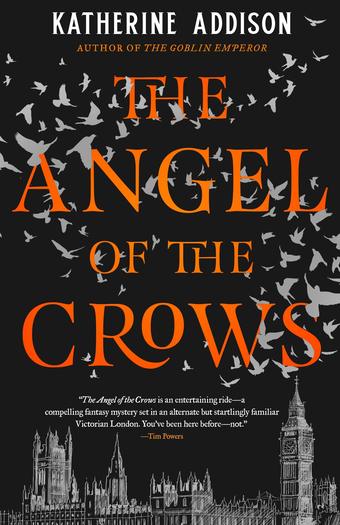 “Addison” is a pen name for Sarah Monette, who’s achieved some notoriety in the field with the Melusine novels and her Kyle Murchison Booth stories, which have appeared in Clarkesworld, Uncanny, and other fine places. In 2014 she adopted the name Katherine Addison to publish The Goblin Emperor, which became one of the most successful books of the year, nominated for the Hugo, Nebula, and World Fantasy Award, and winning the Locus Award for Best Fantasy Award. It was included in Unbound Worlds‘ list of The 100 Best Fantasy Novels of All Time.

What do you do when your pseudonym is more famous than you are? Write more books under the pseudonym, of course. And that’s exactly what Monette has done. Her next Addison novel, The Angel of the Crows, arrives from Tor in two weeks, and it looks like a doozy.

It’s a Sherlock Holmes pastishe in which Holmes is an outcast angel called Crow, Watson is suffers from a supernatural injury picked up in the war, and the city of London is crawling with vampires, werewolves and darker things. Kirkus calls it “A Sherlock Holmes–esque novel that truly breaks the mold,” and The Nerd Daily pronounces it “good for Holmes fans of any stripe.”

Addison… makes note of the inspiration she drew from Cumberbatch’s Sherlock in particular, so it’s no surprise that since Sherlock opened with “A Study in Pink,” The Angel of the Crows opens with what we might call a Study in Gold… Yes, this version of Victorian London is densely populated by angels, monsters, creatures, fey, and various and sundry supernatural alongside the usual assortment of villains, murderers, and thieves. But that’s no real impediment to the world’s greatest detective or his newly stalwart companion. Dr. Doyle, who is essentially-but-not-quite Dr. Watson, joins the enigmatic Crow, who is Sherlock but for one distinct difference: Crow is an angel.

The Angel of the Crows takes us through the most famous of Holmes’s cases, including “A Study in Scarlet,” “The Sign of the Four,” and “The Hound of the Baskervilles,” as well as taking on Jack the Ripper.

Quite enjoyed the Goblin Emperor and was looking forward to the next book under the Katherine Addison byline, but the plot description leaves me cold. Perhaps one too many Sherlock Holmes pastiches. However, I will wait for the reviews and decide then.

My first thought was :” There are Melusine novels?”, but that was because i was reading a lot of these lately :

Thanks for the link — that’s a cool comic!

It took a little while to find these online. Amazon doesn’t list them under “Melusine,” I had to use the authors (Gilson & François). The first volume Hocus Pocus is just $9.99, and the later ones (like Tales of the Full Moon) are $11.95. They’re 48 pages each, and they look like fun! 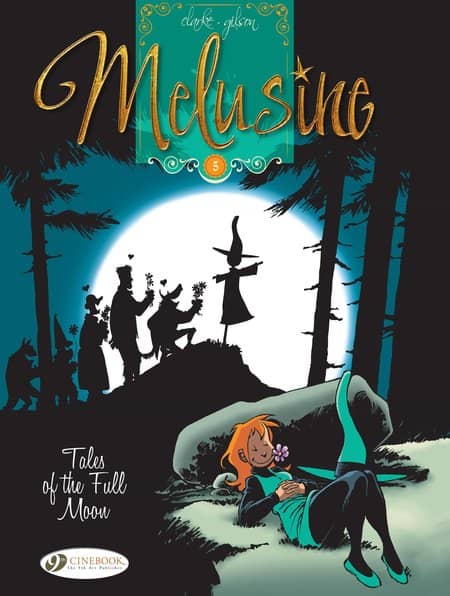 John, sorry about the long search. There is no german translation available, so I simply order the french originals from amazon.fr which works nicely.

Yes, they are very fun (and kid friendly) comics and a great way to keep that last surving bit of school french that is still hidden somewhere in my brain alive.

I originally found them while browsing the comic book stores in Brussels while the wife was at a Shadowhunters convention, and ended up with buying one every mmonth since then.