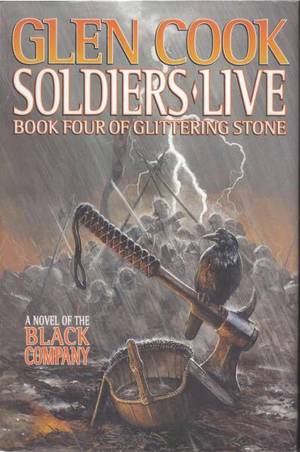 So that’s that. Last night I closed the cover of Soldiers Live (2000), the final volume of Glen Cook’s Black Company series. (Yes, yes, I know there’s a new book, Port of Shadows, coming out this month, but it’s set in the past, before Shadows Linger.) All the Company’s enemies and most of its veterans are laid to rest, mostly in their graves. In the last few pages the Black Company, Last of the Free Companies of Khatovar, leaves one universe for another. Only a single veteran from the pre-Taglian days remains and, after two devastating battles, most of the Taglian recruits are gone as well. And still…the Company remains the Company.

From this point on: Spoilers!

Sleepy leads the Company north from the Plain of Glittering Stone. Her plan is to defeat Soulcatcher’s army, then march on the great city of Taglios and force Mogaba and his fellow commanders to surrender. Outnumbered, Sleepy hopes that the magical advantages afforded by the wizard Tobo will give her the intelligence edge needed to overcome the larger, if less competent, opposing armies.

There are few happy endings in Soldiers Live. Willow Swan, Blade, Murgen, and many of their brethren fall in battle or succumb to their wounds afterwards. Shara is presumably killed in the final great fight near Taglios but her body is never found. We see Sleepy and her command staff caught in a magical trap and later learn they were all burned too severely to be identified. Goblin comes back but he’s been possessed by a demon of Kina. Mogaba, in a new found state of reflection, abandons Taglios in order to prevent its destruction only to be tortured and killed by Tobo. Just as he’s about to resume rule of Taglios, the Prahbrindrah Drah is killed by a stray bolt of magic. Much of the book’s second half is a roll call of the dead, punctuated by vicious battles.

At the heart of Soldiers Live is the fate of Croaker. It is through him that we first meet the Black Company, and through his eyes we leave it. His plan to rebuild the Company would have them traverse the worlds connected by the Plain of Glittering Stone, so Croaker makes a deal with the golem that maintains it. Shivetya is ancient and exhausted, desiring death but trapped in an immortal body. In the end the two swap bodies, allowing the golem to die and Croaker to become a near-divine being, able to access all the ancient history of the sixteen worlds and maintain the gates between them.

When I first read of Croaker’s fate nearly twenty years ago I thought, ok, that’s sort of cool. The mortal historian gets to become the ultimate master of his avocation. I still think that, but now I recognize more of what Soldiers Live is concerned with, especially as regards Croaker. Even though being frozen in stasis for fifteen years kept him from aging, the world and the Company still rushed on without him. The Company he led exists only in the Annals — as do all earlier iterations of the Company — and there is no recognizable place for him anymore. We all travel in time, minute by minute, hour by hour, year by year. Sometimes the chronological destination we reach is one we don’t know and no longer fit.

Croaker has always been obsessed with the past, first as Annalist and later as Captain. His ultimate plan for the Company had been to return it whence it came centuries ago. By the end of Soldiers Live, while understanding the reality of the Company’s evolution and the logic of its plan to relocate to another world, it’s all too much for Croaker. Instead, he makes his deal with the golem and blazes a wholly new trail. For a character whose salient trait was his inquisitiveness, it’s a satisfying way for Cook to bid him farewell.

So what do I make of the Black Company series as a whole? Well, I loved it when I first read it and I love it now. Parts I once loved I’ve come to spot flaws in, and books that bored me have turned out to possess powerful themes and moments. Like Croaker I’ve aged, but instead of leaving the Black Company behind, I’ve caught up with it in unexpected ways. There are two things especially that still rise above everything else and make me love these books.

First, there are the characters. Croaker in particular, but all the narrator-captains of the Black Company are among the most fully realized and deeply explored characters in fantasy. Without ever stinting on the intrigue and conflict, Cook pushes his characters to their limits and gives it to you from the vantage point of their own psyches. Croaker, Lady, Murgen, and Sleepy are so markedly different in how they view the world and how they take it on. Each one gives Cook the opportunity to portray his creation from a drastically different perspective. In the secondary and minor characters, Cook’s created a most colorful and fun collection of rogues, mountebanks, and malefactors that remain with the reader long after the last page is turned.

Second, the Black Company is epic fantasy that succeeds. I’m going to be honest: I’m never going to finish Steven Erikson’s Malazan Book of the Fallen. I read five books (and one Bauchelain & Korbal Broach collection) and gave up; too many pages and too little time. In a fraction of the pages, Cook told a massive story covering four decades with roots stretching back centuries and across universes. He managed to create a complex picture on a massive canvas but still keep things tight and focused. The weakest parts of the series — Bleak Seasons, She Is The Darkness, and the first part of Soldiers Live — suffer because Cook’s focus loosens and too many strands become unraveled for too long. When he keeps things bound together, though, man oh man, do these books deliver. 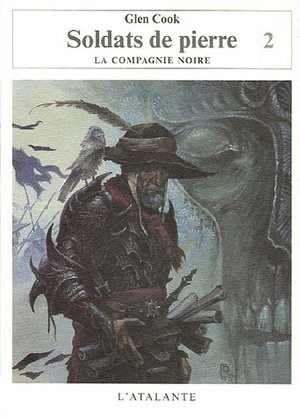 The first six books move swiftly and deliver brutal stories that keep you waiting with bated breath to find out what happens next. Cook knows how to dole out attractive lures that keep the reader saying “one more chapter.” He gives just enough background and color to make his world believable, skipping detailed menu descriptions and endless travelogues that bog things down. A lot of writers could take a lesson or two in epic concision from Cook.

Several other things come to mind as I finish up this last article. Foremost is I’m not sure there’s any epic fantasy series that has followed its cast of characters across so many decades and shown them faltering and aging as has Cook’s. It’s a remarkable achievement in a genre that is so often built around the physicality of its protagonists and their ability to swing a sword and cleave a skull. Here, people lose their hair; grow guts; suffer aches and pains.

I wrote a few weeks back that the Black Company isn’t really military fantasy, but what I should have written is that it isn’t war fantasy. It is military fantasy as much as James Jones’ novel of the US Army before WWII, From Here to Eternity, is military fiction. But when all ten books are laid side by side, it’s clear the focus is on the Black Company out of battle as much as in. In the trappings of solid epic fantasy, filled with plenty of action and derring-do, loads of devilish magic, murder, and mayhem — lots of mayhem — is the story of a force of men bound only to each other and how they make their way in that dangerous world. The story of an organization, made up of traditions and customs, that provides a home for the rootless in peace as well as in war.

With the Black Company, for ten books — ten books mind you — Cook held my attention, sometimes relentlessly, and made me captive to the travails of a band of cold-hearted soldiers. It’s almost a shock that it’s finally over. Still, I’m glad there’s at least one more book coming (next week, in fact). Here’s hoping it’s a good one.

I’ve read the first seven books in the Malazan series. Also, the first two books from Ian Esslemenont and the first three Bauchelain and Broach novellas (which I HATED).

(Something I ran in to the last time I tried to read the ENTIRE Thieves World Universe – including spin offs. I couldn’t handle it all without respite).

But I plan on continuing with Erikson and Esslemont’s books. I think it is a fantastic series and one of the best I’ve ever read. And far less padded than Jordan’s Wheel of Time, which was fantastic, then massively overwritten, then excellent again under Sanderson.

Love the chronicles of Fletcher…they mirror that of Croaker. So… do you plan to read and review Port of Shadows too (releases in ~10days)?

@Bob – I’m not surprised you didn’t like the Bauchelain book. I’m not a fan either. Maybe I’ll give another Erikson book a go – I really liked them – but there really are too many of them and they’re too long.

@Seth – Thank you. I absolutely will review Port, but not for a little while. I’ve got some other things in the hopper and I want to read Gene Wolfe’s New Sun series first.

Thanks Fletcher for this walk down memory lane. It has made me reconsider my opinion of some of the books, but overall most rings true with my memory and appreciation of them. To this day I look at The Black Company as a benchmark for gritty, real, fantasy. If one can overlook that oxymoron.

Port of Shadows will certainly be bought sooner rather than later!

@Tony – You’re quite welcome. Except for Water Sleeps, my opinion of the later books as weaker remains firm. However, now I’m more disappointed with that. I think there’s more interesting things going on in the later books and Cook’s less-than-complete control of the material is a big letdown.