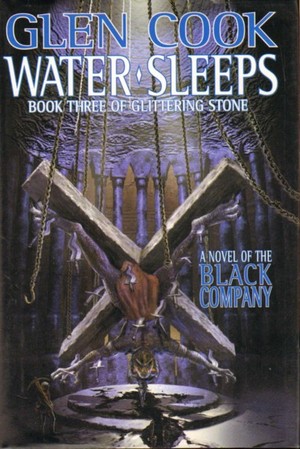 I just finished Water Sleeps (1999), the ninth and penultimate volume in Glen Cook’s Black Company series. Instead of the gigantic battles where legions of soldiers clash under the evil glow cast by demonic sorceries we’re used to from him, Cook focuses here on subtler subjects. Yes, as last week’s review made clear, it’s chock-a-block with nasty twists, kidnappings, and assassinations, but there’s a quieter aspect to this book than to any of the others. For all the craziness that arises, particularly in the second half, this book really starts presenting the Black Company as family. There’s been lots of lip service to that effect over the course of the previous eight books, but we haven’t much seen it borne out. For that reason all the deaths and farewells in Water Sleeps — and there are plenty — have a greater poignancy and impact than ever before.

At the end of the first part of Water Sleeps, the Black Company had left Taglios. With the sort of misdirection and duplicity that is at its heart, the Company split into several groups, adopted secret identities, and lit out separately for the uttermost end of the known world: the Plain of Glittering Stone. Croaker, Lady, Murgen — in fact, most of the major members of the company — had been trapped inside a maze of caverns beneath the Plain by their oldest remaining enemy: Soulcatcher. It had taken fifteen years for the Company’s captain, Sleepy, to come up with a plan to free them and the means to carry it out.

Sleepy and her comrades arrive at the edge of the Plain and quickly outmaneuver the Taglian regional commander, Suvrin. A clever, doughy man who has risen to his position based more on family connections than military competence, he is unable to escape manipulation by Sleepy and ends up willingly signing on with the Company. I mention this bit here because it will become very important in the series’ finale, Soldiers Live. It also reinforces how the Company prefers to operate. From long experience as a spy and urban guerilla, Sleepy has become adept at quickly assessing someone’s real nature and playing to it.

Gradually the rest of the Company, their dependents, and their animals and baggage train make it to the entrance to the Plain, and just in time. Once again, Murgen’s ability to spy via astral projection saves the Company. He sees Soulcatcher, having figured out Sleepy’s plan, in hot pursuit. Barely forewarned of her imminent arrival, the Company rushes its people to the safety of the Plain — where instant death awaits any who enter without the protection of the Nyueng Bao key — while preparing a deadly reception for Soulcather at its entrance. It doesn’t succeed in killing Soulcatcher, and she ends up with the the Kina-possessed Daughter of Night and Naryan Singh as her prisoners, but the Company escapes. Soon they are on the brink of recovering their lost comrades.

It as this point the truth of the vast, circular Plain of Glittering Stone is finally revealed. It is a gigantic artifact created by a vanished race and connects sixteen worlds. Whether they are different realities, the same world at different times, no one knows. What is known is that humans, being the greedy, vicious things they are, turned to conquest across the sixteen worlds. At some point, the greatest villains of the universe — now remembered as gods in the Gunni pantheon, though their origin is unclear — pooled their resources and elevated one of their own to even greater heights of power and wickedness: Kina the Destroyer. Eventually she was cast down and imprisoned far beneath the giant fortress and someone — or possibly the Plain itself — created a giant golem, Shivetya, to protect the the gates and oversee traffic between the worlds.

That was untold thousands of years ago, and over time many of the gates failed. Not dead, Kina inspires her worshippers to find a world suitable for sacrifice in order to free her. They’ve not succeeded, but still she sleeps and dreams in her bonds, driving her devotees onward and tricking others to do her bidding. Finally, in this tale the Company come face to face with her. In that confrontation it loses one of its most important members and learns Kina is even more dangerous than they ever suspected.

And none of this addresses the point I raised: it’s Sleepy’s voice as Annalist that provides the room for the story of the Company as a family to be told. She literally grew up in the Company, joining as a teenager under the protective wing of the veteran trooper, Big Bucket. Unlike in the past, when the band was a potent fighting force of thousands, in Water Sleeps it’s a three hundred-strong remnant that depends on the absolute loyalty of each member to another. Through Sleepy’s annals she shows just how close the members have become. Over fifteen years of living in the shadows of Soulcatcher’s insanity, Mogaba’s army, and the Radisha’s police, they live cheek by jowl, run businesses together, and of course, carry out an endless shadow campaign against their enemies. The discovery of some of their comrades’ remains is one of the more mournful events in the series.

We began to find more bodies, sometimes in twos and threes. A fair number of the Captured had not been caught at all. I recalled Murgen’s report that almost half the party made a break for the world after Soulcatcher got loose. Here they were. I did not remember most of them. They were Taglian or Jaicuri rather than Old Crew, mostly, which meant they had enlisted while I was up north on Murgen’s behalf.

We came upon Suyen Dinh Duc, Bucket’s Nyueng Bao bodyguard. Duc’s body had been prepared neatly for ceremonial farewells. That Bucket had paused in the midst of terror to honor one of the quietest and most unobtrusive of the Nyueng Bao companions spoke volumes about the character of my adopted father — and that of Duc. Bucket had refused to accept protection. He did not want a bodyguard. And Suyen Dinh Duc had refused to go away. He had felt called by a power far superior to Bucket’s will. I believe they became friends when nobody was looking.
I began to shed the tears that had not come when we had found Bucket himself.

Willow Swan and Suvrin tried to comfort me. Both were uneasy with the effort, not quite knowing if hugging would be acceptable. It sure would have been but I did not know how to let them know without saying it. That would have embarrassed me too much.

In Water Sleeps, except for Goblin and One-Eye, there are no members of the Black Company who enlisted before the Company reached Taglios twenty years earlier. Nonetheless, the Black Company persists as the Black Company, loyal to its history chronicled in the Annals, loyal to its traditions, loyal to itself. It’s an interesting idea of an institution whose sense of self is strong enough to remold new members whatever their languages or cultures might be. Until Sleepy, there’s been a steady disparagement of religion in the Black Company. It’s never been a secret, though, that the Annalist acts in a role similar to a preacher, reading the Annals aloud to the troops in order to inspire them and reinforce their sense of belonging to the Company. The Company is a home for the rootless and ruthless. It welcomes all, but all are reshaped to fit the needs and goals of the Company.

For all the scenes of espionage and irregular fighting, Water Sleeps is really about the bonds between family, both natural and created. It is about the lengths that people whose connections were formed in war will go to to protect and save one another. When Goblin confronts Kina there is nothing he won’t do to protect Sleepy and Tobo, no matter what the cost to himself. It is by no means a gentle book, but it’s one that moves at a more measured pace and with more introspection than the rest of the series. It’s a shame that because Bleak Seasons and She Is the Darkness are such disappointing books, I suspect many readers never made it to Water Sleeps.

Next week it all comes to an end (until next month, when the brand new Black Company book, Port of Storms, is released) with the thoroughly depressing and miserable Soldiers Live.

Gets out his Oxford Dictionary and looks up ‘Penultimate.’

“These fancy schmancy writers and their big words….”

And finally, we get to Soldiers Live next week.

I think my memory is failing me but I can’t say I enjoyed Water Sleep too much. Could be I read the books one after the other and became overloaded. Or maybe I didn’t appreciate Water Sleeps for the eloquence that Fletcher has described so well here. Then again could be I am confusing parts of the story with Soldiers Live.

What is evident is I need to embark on a re-read exercise at some stage, if only to refresh my memory.

@Bob – Fancy schmancy yourself!
@Tony Den – I didn’t remember digging it all that much originally, but now I’m older and more contemplative (or something) and I found it totally worked this go around.