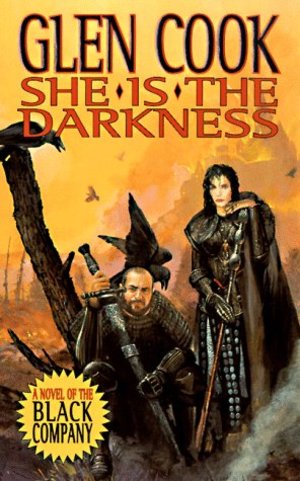 I think this reread of She Is the Darkness (1997) took me so long because I subconsciously remembered how disappointing it is. The first half (reviewed last week), despite a bunch of problems, is all right because of Cook’s usual talent at creating cool characters and sticking them into tough situations. It also had some epic battle scenes. As the Black Company inched its way toward the Shadowmaster’s fortress, the good managed to outweigh the bad. This was not the case for the book’s second half, despite some crowning moments of awesome. Not at all.

We left off last week’s post with the siege of Overlook about to begin. The Taglian legions raised and trained by Croaker and Lady invest the fortress. The great castle eventually falls not to starvation or the walls being thrown down, but to a coup de main. Overlook is so vast and so undermanned that Lady and her most loyal troops were able to secretly bore their way into its foundations and operate from within. After much planning (and magical scouting by Murgen), Lady is able to capture Longshadow.

Back in Taglios the Prince’s sister, the Radisha Drah, starts hunting down the Black Company’s allies. She has always feared the Company; now that Longshadow is defeated the time is ripe for its destruction. Having assumed a betrayal would come (as it always does for them), Croaker has readied the Company for the for the final trek to Khatovar.

The road to Khatovar lies to the south of Overlook, through something called the Shadowgate. From the gate come the shadows — deadly spectral things Longshadow and the Shadowmasters could control to a certain extent. Beyond the gate lies a great barren circular plain. From the gates (turns out there are more than one) are roads leading to the plain’s center, like the spokes of a wheel. And there stands a ruined fortress even greater than Overlook. Its inner courtyard measures nearly a mile across.

Certain the answer to where or what Khatovar is lies within, Croaker leads the core of the Black Company, along with its most important prisoners, — Longshadow, Howler, and Soulcatcher — into the ruins. But instead of answers, what lies behind the broken walls is a devastating trap. The book ends with the most important military commanders and veterans of the Black Company in stasis, and Soulcatcher racing back to Taglios in order to unveil some yet-undescribed scheme.

That synopsis makes the second half of She Is the Darkness sound pretty cool. Don’t be fooled. All sorts of things drown that simple narrative: Murgen’s incessant dream-traveling, confusing scene shifts, and inadequately developed characters, to name a few. I’d love to see a list of every scene in the latter part of the book. It must number in the dozens. Numerous scenes isn’t automatically a problem, but when they’re too short and too undeveloped, they are. 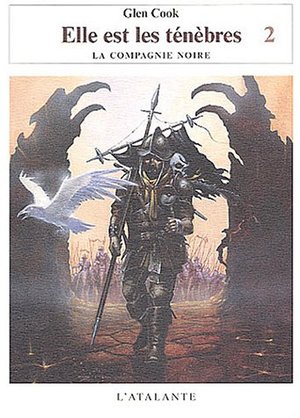 Cook does an interesting thing at one point. Croaker reads Murgen’s entries in the Annals and calls him out for his self-centeredness. There are almost no entries that don’t rely on Murgen having seen the events in question himself, whether in person or as a psychic spy. I guess it’s Cook’s way of letting the reader know he knows there are issues with Murgen’s narration, but it doesn’t do anything to alleviate the murkiness and confusion that swamps too much of She Is the Darkness. It feels like he’s saying “Hey, I know you think there are some problems, but they were deliberate, so it’s all cool.”

So what’s to like? Sadly, not enough. There are lots of things with great potential, but most of them would have been better fleshed out and given more time. In particular, Goblin’s guerilla mission and eventual capture of the the Limper’s shapeshifting pupil is a great but poorly served adventure. The same goes for Lady’s infiltration of the dungeons of Overlook and Sleepy’s trek to the Nyueng Bao homeland on a secret mission.

Croaker’s transformation from romantic good guy into flint-hearted schemer is a psychologically reasonable path for the character. But because he’s been reduced to an offstage figure in She Is the Darkness and Bleak Seasons, that path feels poorly explored. The same goes for Lady’s reemergence as a powerful sorceress and almost independent force in the ongoing war against Longshadow. Numerous minor characters such as Willow Swan, Cordy Mather, and most of the Old Veterans of the Black Company, fall off the face of the world in this book, too.

There’s nothing more to add about She Is the Darkness. It’s a flawed book that, while it manages to cover a lot of ground on the road to Khatovar, suffers from covering too much of that ground in too little detail and with too little clarity. I don’t hate it, because, well, it’s still the Black Company, but I can’t honestly say I like it.

I almost wonder if Cook had a less severe case of George R.R. Martin syndrome, where the story kind of started to get away from him. And he had to deal with a bunch of additional constraints that Martin didn’t — the fact that the series is written as a series of in-world journals, so there has to be a way for the chronicler to have seen the events he’s writing about.

Which also reminds me a bit of the last Harry Potter book, where because Rowling had always kept the focus so tightly on Harry himself that when he effectively sidelined himself for much of the book (sitting in the tent snarking at Hermione & Ron), she had to follow his events rather than the (more interesting) stuff happening at Hogwarts.

Joe, you may be onto something there. It must be very hard to try and keep track of events as a single journal with people in different places. I think the Letters from Corby in The White Rose possibly worked better. What also may have worked is if the journal of event was written as an after the event history, once various people’s recollections had been pulled together.