In their homes, in the shadowed alleyways or fields of grain or in the sodden paddies, in the pastures and forests and tributary cities, should a comet be seen in the sky or should an unseasonable storm strew devastation or, particularly, if the earth should shake, they murmur, “Water sleeps.” And they are afraid. 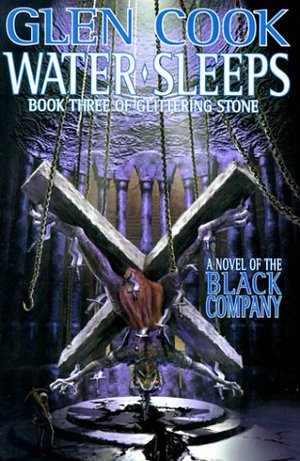 I wish I had managed to finish the ninth Black Company book, Water Sleeps (1999), in a single go because, after two frustrating choppy books, Cook is back on his game. Yes, it’s very different than the bloody, battle-focused earlier books, but Water Sleeps, so far, is a tight story with narrative complexity, brutal twists, and more world-building than any of the others.

The previous volume, She is the Darkness, ended with most of the Black Company’s senior officers  — Croaker, Lady, and Murgen — and several important prisoners — the Prahbrindrah Drah of Taglios, Howler, and Lisa Bowalk — trapped by Soulcatcher and held in stasis on the demon-haunted plain of Glittering Stone.

As Water Sleeps opens, we quickly learn that Croaker et al. have been imprisoned for nearly fifteen years. Murgen’s Standardbearer-in-training, Sleepy, is acting Captain, aided by Murgen’s Nyueng Bao wife, Shara, and the increasingly feeble One-Eye and Goblin. Soulcatcher has declared herself Protector of Taglios, has made the Radisha Drah little more than a puppet, and has rendered her councilors toothless. For a decade and a half, the survivors of the Company have been hunting for a way to free their colleagues from Soulcatcher’s trap, while constantly reminding her that the Black Company never lets a betrayal go unpunished.

Sleepy is not only Captain, she’s also the Company’s Annalist. In her hands, there’s greater attention paid to politics and culture than in the other volumes. Unlike Croaker and Lady, Sleepy doesn’t see Soulcatcher and the other power brokers in Taglios just as obstacles. They are part of a complicated nexus of power centers and religious beliefs. Through her, Cook explores and underscores how they manage to run a vast realm. She’s also the only narrator in any of the books who has religious beliefs. When she explains the three main religions of Taglios — Gunni, Shadar, and her own Vehdna — she does it with a degree of sympathy absent from Croaker’s or Lady’s books.

Sleepy was a young Jaicuri woman in Dejagore during the great siege. Sexually abused by her uncles, she disguised herself as a boy and escaped into the ranks of the Black Company. When the siege ended she remained with the Company and became Murgen’s pupil. Eventually her secret was uncovered, but by then her reputation had been established and Lady had already set the precedent of a woman Captain.

The heart of the Black Company’s tactics is subterfuge. It’s a subject that must be dear to Cook’s heart since he portrays it with even more detail and color than he does most of the Company’s battles over the course of the previous eight books.

Sleepy has led the hunt for a way to free the Company’s comrades, at the same time masterminding an ongoing campaign against the Protector and the forces of Taglios. Mostly it’s been petty actions: painted slogans, minor magical attacks, and the occasional assassination. The book’s title comes from the most common slogan, a shortened version of a Jaicur maxim: “Water sleeps but Enemy never rests.” The other common slogan is “My Brother unforgiven.” For years the Protector and her general, ex-Company officer Mogaba, have claimed the Black Company and its commanders have been killed to a man. The Company’s crusade manages to keep the rulers of Taglios and its people in a constant state of uncertainty, and even fear.

The Company has been helped every step of the way by Murgen. Although trapped in stasis he’s maintained his ability to project astrally, and Shara can summon him forth to spy for them. Unseen, unfelt, Murgen can penetrate any wall or barrier in Taglios and keep tabs on all the Company’s foes. 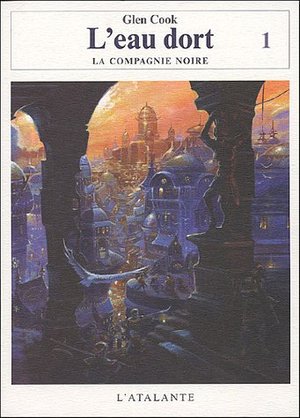 The first half of Water Sleeps covers the gradual development of a plan to free the entrapped Company members. By means of several secret identities, Sleepy and others infiltrate the Palace of Taglios and the city’s library to find missing volumes of the Company’s Annals. Along the way they also learn the secret history of the Nyueng Bao. These discoveries point the Company toward a solution. Long ago, the Nyueng Bao were another band of warriors in service to Kina just like the Black Company, and they, too, possessed a key to open the Shadowgate. With it, Sleepy and the Company hope to gain access to the plain of Glittering Stone and free their friends. Unfortunately, the Nyueng Bao key was stolen first by Soulcatcher and then by the Deceiver Narayan Singh. Finding and capturing Singh and the Daughter of Night — Croaker’s and Lady’s Kina-possessed child — is just one of several deadly undertakings that fill up the first half of Water Sleeps. I left off with the two hundred or so members of the Black Company abandoning the lives they’ve built in Taglios and heading south in search of the Nyueng Bao key, in hopes of liberating the trapped Company members.

I had remembered sort of liking Water Sleeps, but my recent disappointments with Bleak Seasons and She is the Darkness left me with little hope for it. I’m very happy to say this book is a blast. None of Cook’s previous depictions of the Company as a wily, duplicitous organization compares to what it’s become in the fifteen years since the last book. Every member of the Company has multiple identities he can slip into and out of at a moment’s notice. Goblin and One-Eye have placed an almost endless array of confusion spells across Taglios and throughout the twisting corridors of the Palace that allow the Company safe passage everywhere. Sleepy and Shara make regular deep studies of the various Taglian powerbrokers so they can then eliminate the people whose loss will hurt the Protector the most. Yes, at this point, Water Sleeps is a real blast.

Come back next week for Part 2 of Water Sleeps. I’ve got my fingers crossed that the rest of the book will measure up to the exciting first part.

Fletcher – this is one of my favorite Black Gate series’ of recent years. Well, one that doesn’t have my name at the top, anyways… 🙂

I think you’re doing a great job looking at an overall excellent series that is probably more popular in the ‘cult’ sense than well-known generally. And it deserves to be lauded more in the fantasy field.

I’d like to see other fantasy series’ get this type of treatment. If I wasn’t a hack, I would have tried something like this when I reread the Belgariad and the Mallorean last year (I respect Eddings’ stuff more than most around here, who seem to dismiss it as ‘light’ fantasy).

Maybe some day you and I could do a couple of posts where we jointly discuss a few of Cook’s Garrett PI books.

With all that spare reading time we both have…

Thanks, Bob. My dad (whose tastes I admittedly always found a little suspect) loved Eddings and bought most of his book as soon as they came out. I would definitely be down for discussing the first four or five Garrett books.