V. E. Schwab (who also writes YA fantasy under the name Victoria Schwab) is one of the few — indeed, perhaps the only — author with a bestselling superhero fiction saga that doesn’t belong to Disney or Warner Bros. Her Shades of Magic trilogy, the epic tale of an ambassador and smuggler who travels between parallel Londons, was a New York Times bestseller, and This Savage Song, the opening volume of her Monsters of Verity series, set in a divided city overrun with monsters, was both a #1 New York Times bestseller and an Amazon Best Book of the Year.

Matthew Surridge was the first person to bring her to my attention, with his 2014 Black Gate review of Vicious, the opening novel inVillains. Here’s Matthew:

Ten years ago, Victor Vale and Eli Cardale (later Eli Ever) are brilliant pre-med students who discover that near-death experiences can, under certain circumstances, grant survivors strange powers. They experiment, things go wrong, and while they both get powers, they end up as enemies. Now, in the present, Victor’s gotten out of prison, recruited some assistants, and is seeking out Eli — who himself has been up to some surprising things in the previous years, having come to hate the extraordinary people (or EOs) gifted with powers…

I think Vicious is interesting precisely because it straddles genres. It attenuates some of the signifiers of the super-hero genre (costumes, code-names, and so on) while maintaining others. And the result, I feel, moves the story in the direction of another genre. It moves it toward the gothic… It comes to feel a little like some of the early Vertigo comics, the Morrison and Pollack Doom Patrol, perhaps Nocenti’s Kid Eternity or Peter Milligan’s Shade: clear super-heroic elements mixed with a greyer world and some elements of horror. It’s not as complex as the best of the Vertigo books, but has a narrative drive many of them lacked… It’s fascinating to see the gothic emerging from under the skin of the super-hero genre. And as a character study, it succeeds, integrating flashbacks while maintaining narrative momentum. It reads smoothly, swiftly, and well.

Vengeful, the long-awaited second novel, arrives in hardcover from Tor on September 25. Here’s the description.

But Marcella Riggins needs no one. Flush from her brush with death, she’s finally gained the control she’s always sought ― and will use her new-found power to bring the city of Merit to its knees. She’ll do whatever it takes, collecting her own sidekicks, and leveraging the two most infamous EOs, Victor Vale and Eli Ever, against each other once more.

With Marcella’s rise, new enmities create opportunity — and the stage of Merit City will once again be set for a final, terrible reckoning.

You can read “Warm Up,” a prequel to Vicious, completely free at Tor.com. 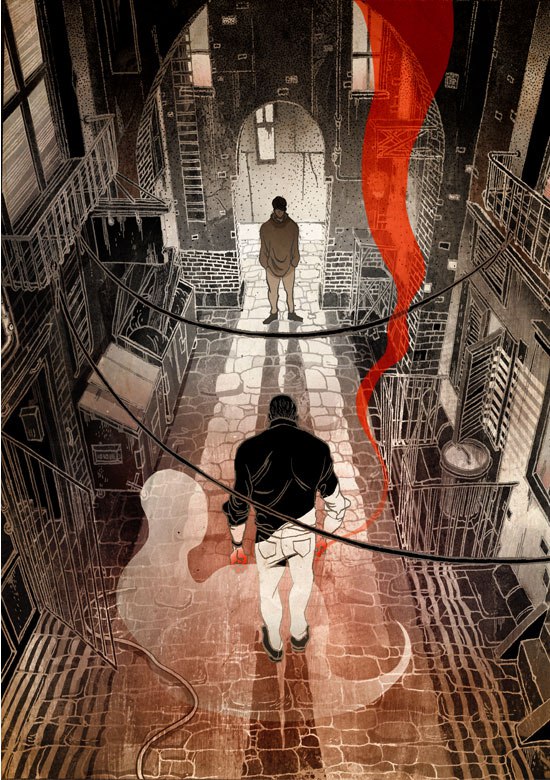 “Warm Up” art by Victo Ngai