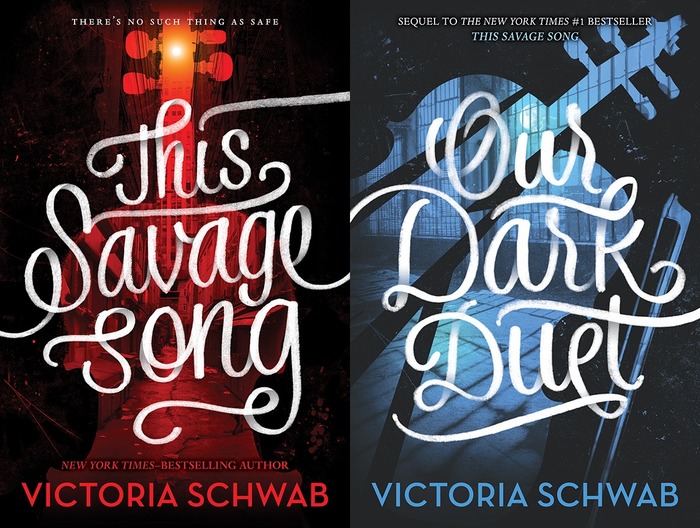 Under her secret identity of V.E. Schwab, Victoria Schwab is the bestselling author of the Shades of Magic trilogy and the superhero/dark fantasy tale Vicious (which Matthew David Surridge called “A fine story… it’s fascinating to see the gothic emerging from under the skin of the super-hero genre,” in his 2014 review). Under the name Victoria Schwab she’s published a number of YA fantasies, including The Near Witch and the two volumes in the Archived series.

Her Monsters of Verity series began with This Savage Song, set in a divided city overrun with monsters. It became a #1 New York Times bestseller and an Amazon Best Book of the Year. The concluding volume, Our Dark Duet, arrives this month from Greenwillow Books.

Here’s the description for both books.

Kate Harker and August Flynn are the heirs to a divided city — a city where the violence has begun to breed actual monsters. All Kate wants is to be as ruthless as her father, who lets the monsters roam free and makes the humans pay for his protection. All August wants is to be human, as good-hearted as his own father, to play a bigger role in protecting the innocent — but he’s one of the monsters. One who can steal a soul with a simple strain of music. When the chance arises to keep an eye on Kate, who’s just been kicked out of her sixth boarding school and returned home, August jumps at it. But Kate discovers August’s secret, and after a failed assassination attempt the pair must flee for their lives.

In This Savage Song, Victoria Schwab creates a gritty, seething metropolis, one worthy of being compared to Gotham and to the four versions of London in her critically acclaimed fantasy for adults, A Darker Shade of Magic. Her heroes will face monsters intent on destroying them from every side — including the monsters within.

And Our Dark Duet:

Kate Harker is a girl who isn’t afraid of the dark. She’s a girl who hunts monsters. And she’s good at it. August Flynn is a monster who can never be human. No matter how much he once yearned for it. He has a part to play. And he will play it, no matter the cost.

Nearly six months after Kate and August were first thrown together, the war between the monsters and the humans is a terrifying reality. In Verity, August has become the leader he never wished to be, and in Prosperity, Kate has become the ruthless hunter she knew she could be. When a new monster emerges from the shadows — one who feeds on chaos and brings out its victim’s inner demons — it lures Kate home, where she finds more than she bargained for. She’ll face a monster she thought she killed, a boy she thought she knew, and a demon all her own.