Rich Horton continues his tireless exploration of the Ace Doubles, this time looking at a 1954 pairing of Isaac Asimov’s second novel The Stars, Like Stars (re-titled here The Rebellious Stars), and the only SF novel by Roger Dee, An Earth Gone Mad. Here’s Rich.

The Rebellious Stars is better known as Tyrann, under which title it appeared as a Galaxy serial in 1951. (OK, it’s even BETTER known as The Stars, Like Dust…) In this edition it is about 67,000 words long, and the book is labeled “Complete and Unabridged,” so as far as I know it’s the same as the standard edition….

I was perhaps only 12 when I read The Stars, Like Dust. I’ve always remembered it, if only dimly, with pleasure… The story opens as Biron Farrill, the heir of the Rancher of Widemos on the planet Nephelos, is about to graduate from his university studies on Earth. He is wakened one night by a ticking which he soon determines is a bomb — an assassination attempt. Soon Sander Jonti, a friend of his from the university reveals that his father has been arrested by the Tyranni, the harsh ruling class that controls some 50 planets near the Horsehead Nebula, including Nephelos. It seems Biron’s father was involved in a resistance movement, and Jonti is as well. Jonti convinces Biron that his life is in immediate danger… The plot takes several twists from that point — it is all rather intricately designed — before reaching a somewhat surprising (though dare I say rather guessable) conclusion… while the plot is perhaps overcomplicated, and depends quite a lot on people acting in extremely convoluted ways, it is worked out somewhat satisfactorily in the puzzle-unraveling sense.

Matthew Wuertz reviewed the novel for us in its original Galaxy incarnation from 1951, and noted the similarities to a certain multi-billion dollar SF property. 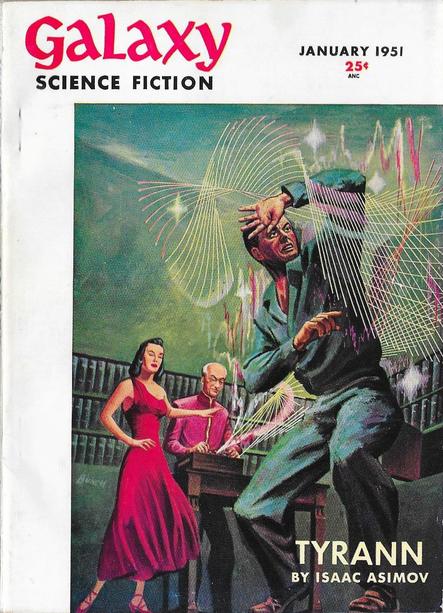 Jonti helped Biron escape from Earth after he survived an assassination attempt with a radiation bomb… In time, Jonti knows the Tyranni will crush Lingane, but he hopes to join forces with a rebellious world hidden within a nebula. And with nobility like Biron and Artimisia behind him, the Autarch could have political support as well, if Biron will join forces with him.

I really like this novel so far. I’ve seen a few other possible tie-ins to Star Wars, so I’d be surprised if The Stars, Like Dust wasn’t on a shelf in the fabulous library at Skywalker Ranch. In fact, throw in some light sabers and a couple of droids, and it’s not too far of a stretch. 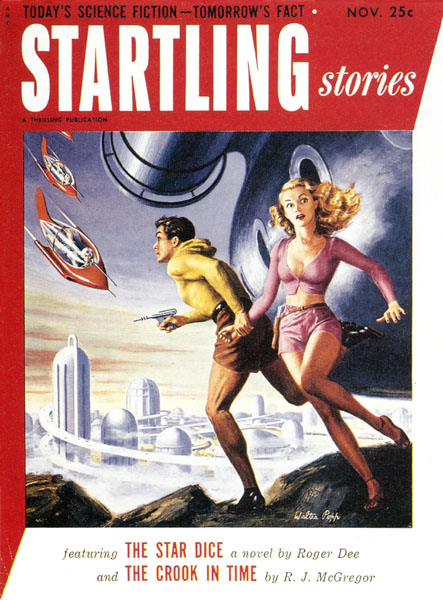 The flip side of the book is An Earth Gone Mad, by an author I’m largely unfamiliar with. Here’s Rich again:

An Earth Gone Mad, by Roger Dee, first appeared as “The Star Dice” in Startling Stories, November 1952, but this edition, the first and only English language book edition, may possibly be expanded… The story opens with Paul Shannon leaving Io after having been marooned there for 2 years… With the help of an inscrutable rocklike alien, he has repaired his crashed spaceship, and he limps back to Earth. But once on Earth, he finds that strange changes have occurred. A growing proportion of the population seems hypnotized into serenity and passiveness by the influence of some strange cubes that dropped from space — these are the Cubists. (I don’t know if Dee intended a reference to the modern art movement.) The rest of the US seems split down the middle — the corporate oriented “Syndicate” is pro-Cubist, more or less, because the Cubists make tractable workers, while the labor unions are opposed, because Cubists are taking the jobs of ordinary workers. The government tries to toe a middle line.

Shannon’s instincts are strongly anti-Cubist, especially after he encounters his fiancee, who has become a Cubist, and is horribly changed thereby. He becomes obsessed with finding a way to counteract the effects of the Cubes. But he also finds himself mysteriously pursued by several different agents… It ends up ironically a curious pairing to an Asimov novel, not because it much resembles The Rebellious Stars, but rather because some of the ideas considered resemble ideas from much later Asimov novels like Foundation’s Edge and Foundation and Earth. All in all I don’t think it a very good novel, but it’s a tolerable fast-moving read, with at least a brushing against potentially interesting SFnal ideas.

I believe in one volume of his autobiography (or perhaps some other book) Asimov expressed some serious issues with Ace labeling it as complete and unabridged, since that is, in fact, an abridged version. In fact, I believe when he complained, the editor was shocked that he would read his own paperback reprints. Presumably he had been doing the same thing to other authors and getting away with it.

That’s a great story! As Rich mentions in his review, that’s hardly the only editorial interference with the book… Donald Wollheim changed the title, and Galaxy editor H.L. Gold requested that Asimov add a subplot:

“What bothered me? One thing, of course, is the infamous subplot, added at Galaxy editor H. L. Gold’s insistence, about a search for a document which will be the downfall of the Tyranni. Surely this document is the plans for a super weapon? No: surprise!, it’s the Constitution of the United States… that subplot is easily mentally excised — it certainly shows signs of last minute pasting in…”

I still liked Asimov’s novel for what it was. No, it’s not the type of novel that you hold up as a masterpiece. And the Constitution subplot wasn’t his idea. To me, the novel is like some modern superhero movies… they’re usually fun to watch, but you don’t find yourself thinking about them weeks later.

To nitpick, THE STARS LIKE DUST was not Asimov’s first novel but his second — PEBBLE IN THE SKY (1950) was his first. (You could argue about FOUNDATION, but the complete “novel” (still really a collection of stories) was not published until August 1951, well after the serialization of TYRANN.)

> To nitpick, THE STARS LIKE DUST was not Asimov’s first novel but his second — PEBBLE IN THE SKY (1950) was his first.

Right you are! I read THE STARS LIKE DUST first, so I keep making that mistake. 🙂 I’ve fixed it above.

You’re also correct that several of his FOUNDATION novellas verged on novel length. But Asimov talked about Pebble in the Sky as his first novel for much of his career, so I’ll honor that distinction here.