1979 Ace edition, paired with Master of Life and Death. Cover by Frazetta.

Robert Silverberg’s novella “Spawn of the Deadly Sea” appeared in the April 1957 issue of Science Fiction Adventures. He expanded it to novel length in 1965, retitling it Conquerors from the Darkness in the process. It wasn’t one of Silverberg’s more successful novels, at least from a commercial standpoint. Today it’s considered a juvenile, and it was reprinted only a handful of times, including a 1979 Ace paperback in which it was paired with Master of Life and Death and given a typically colorful Frank Frazetta cover (above).

In his introduction to the Ace edition Silverberg talks about Robert E. Howard, and it’s one of Silverberg’s few early SF novels with a clear Howard influence. Perhaps as a result, the book certainly has its fans. Here’s an extract from James Reasoner’s enthusiastic review on his blog.

Conquerors from the Darkness is exactly the sort of vivid, galloping action yarn that made me a science fiction fan in the first place. At first it seems like a heroic fantasy novel, set in some totally different universe than ours. The oceans cover the entire planet except for a few floating cities. The only commerce is between those cities, and keeping the seas safe for the merchant vessels is a Viking-like group known as the Sea-Lords. The hero of the novel, a young man named Dovirr, lives in one of the cities but wants to be a Sea-Lord and take to the oceans. He gets his wish and rapidly rises in the ranks, and along the way the reader learns that this is indeed Earth, a thousand years after alien invaders flooded the planet for reasons known only to them, preserving a little of humanity in those floating cities… the alien Star Beasts return to take over the planet again, and Dovirr and his comrades have to find some way to stop them with swords and sailing ships.

I really enjoyed this book. In his introduction, Silverberg mentions reading the work of Robert E. Howard, and I can see some Howardian influence in Conquerors from the Darkness, most notably in the way Dovirr manages to seize command of every situation in which he finds himself, much like Conan, and in a very Howard-like final line. The pace is fast, the writing colorful, and the inner 14-year-old in me just loved it. The adult reader in me thought some parts of the story could have been developed a little more and a little better, but hey, adult readers weren’t the target audience for this yarn… I highly recommend Conquerors from the Darkness.

Master of Life and Death hasn’t faired much better. It was originally serialized in New Worlds in 1956, and made its paperback debut as half of an Ace Double the next year. It’s been out of print for nearly 20 years (although I did see a self-published trade paperback edition pop up on Amazon last month, if you’re in the market for this one). 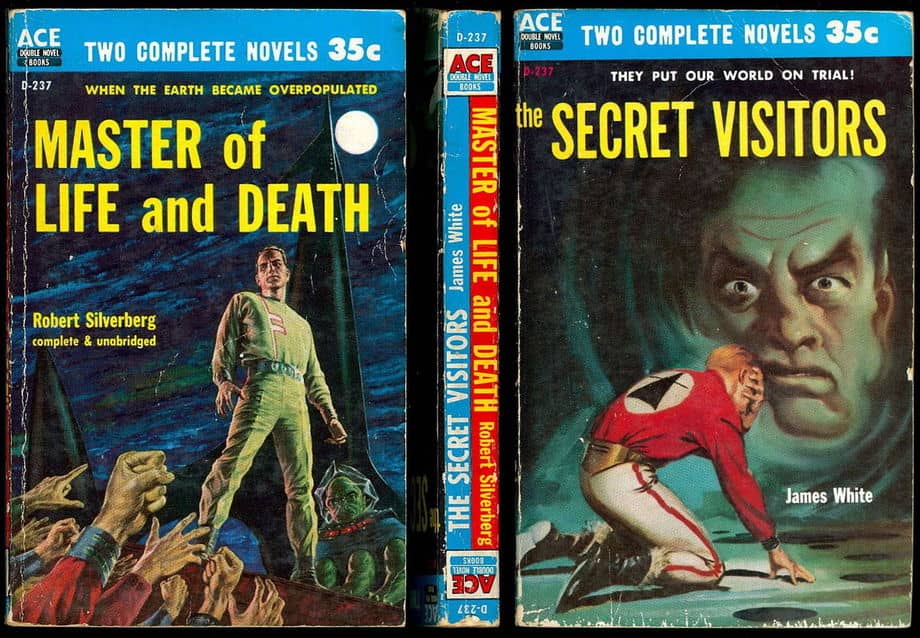 Silverberg was one of the writers who introduced me to the genre, with his novel Collision Course; I’ve been a fan ever since.

I wasn’t familiar with Conquerors from the Darkness however, until I came across a copy  of the 1986 Tor paperback edition in a small paperback collection I bought online last month. The cover of this one intrigued me in ways the others hadn’t, and it’s the perfect size (213 pages) for a quick weekend read.

Purists in the audience (you know who you are) may be interested in the original magazine edition of Conquerors from the Darkness, which is available online for about the cost of a new paperback.

Conquerors from the Darkness was published by Tor Books in July 1986. It is 213 pages, priced at $2.95. The cover is by Tom Kidd. It is still in print, in a modern trade paperback edition from ReAnimus Press.

Master of Life and death isn’t bad at all – for an Ace Double!

Do believe I’m going to need to add these to the infinite list.

Nice cover on the Ace edition. But not Frazetta.

Also – it’s nice when they let you write an ecstatic blurb…for your own book!

> Master of Life and death isn’t bad at all – for an Ace Double!

I thought I’d include a Rich Horton quote on Master of Life and Death… but there isn’t one! In fact, there aren’t many online reviews at all, which isn’t a very good sign. The blog Science Fiction Ruminations called it “Terrible… I hurled it on the ground at one point.”

> Nice cover on the Ace edition. But not Frazetta.

Yeah, I think you’re right, despite the fact that ISFDB credits the cover to Frazetta:

and a handful of other sources do as well. It doesn’t really look like Frazetta, and it’s not listed in any of Frazetta’s online catalogs.

I can’t find any other art credit for the cover, though. Anyone out there have an idea?

The writer for Science Fiction Ruminations should come and see me…I could how him a few things.