I have a real fondness for novellas. Like many other readers, I think they’re the perfect length for SF and fantasy — long enough to develop and explore a fascinating new setting, but short enough to keep the narrative fast-paced and lean.

Unfortunately, there aren’t many outlets for novellas these days. Economic realities have squeezed the page counts of print magazines, and most online magazines don’t publish them at all (Rashida J. Smith’s GigaNotoSaurus being the notable exception). Perhaps that’s why I’ve been so excited by Tor.com‘s new novella line, which has already produced some terrific titles.

So I do find myself drawn to anthologies that include novellas… like my favorite book of the year (so far), The Year’s Best Science Fiction & Fantasy Novellas: 2015, Peter Crowther’s excellent Cities, and many others. But I do miss the days when folks like Robert Silverberg would produce mass market paperbacks collecting some of the best novellas from the top science fiction magazines, as he did in Great Short Novels of Science Fiction, a 95-cent Ballantine paperback from 1970.

Great Short Novels of Science Fiction gathers five novellas and one novelette from the 1940s-1960s, including some of the most popular SF writers of the mid-20th Century. Folks like Roger Zelazny, A. Bertram Chandler, Jack Vance, C. M. Kornbluth, and others. Here’s a look at the magazines the stories first appeared in (click for bigger versions.)

Here are the last three magazines which produced these novellas: 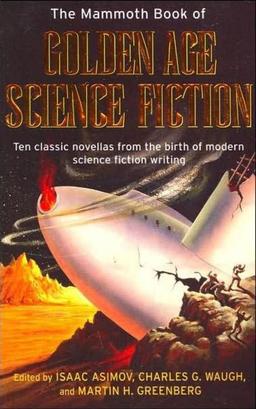 If you’re a novella fan, and especially if you’re a fan of vintage SF, here are a few other books you may want to keep an eye out for:

Great Short Novels of Science Fiction was published by Ballantine Books in July 1970. It is 373 pages, priced at $0.95. The cover is by Donna Violetti. It has never been reprinted, and there is no digital edition. Good-condition copies on eBay and Amazon start at around $3.

See all of our recent vintage treasures here.

Really love the pair of ASTOUNDING covers. That’s a wonderful list of SF short novel collection. I wonder if there exists a Fantasy counterpart to them?

There’s actually three Astounding covers… but yeah, I know what you mean. Astounding had some top notch cover art.

Good question about the fantasy counterpart. Let me ponder that one. Anyone have a suggestion?

Ah, so it is three ASTOUNDINGs. I was referring to the pair on the far left. Collecting those old mags has always appealed to me but it’s not a collecting door I’ve opened. Very tempting, always, always. Maybe when all the old Pulps hit Kindle I’ll start buying them. Wish someone would start putting those out.

I was lucky enough to have all of the Astounding issues from Jan 1950 through December 1970 (yes, it morphed into Analog during that time) and so read a lot of great novellas, including the ones you show. Sadly those issues went away. I also came across several of the Mammoth collections in a used book store about 25 years ago, and still have those, somewhere. I *think* I read them all, but the memory doesn’t always serve.

I guess I got those Mammoth collections about FIFTEEN years ago…

> Collecting those old mags has always appealed to me but it’s not a collecting door I’ve opened.
> Very tempting, always, always.

Well, this is a pretty good time to be collecting Astounding, as long time readers pass away or get rid of their collections. There’s usually 1-2 dozen collections on eBay at any given time, and you can expect to pay well under $1/issue for good-sized collections from the 50s and 50s (including shipping).

If $22.99 is too steep, the seller has a “Make Offer” button for you to counter with a lower offer.

I don’t suspect this period of low prices will continue, as the supply of individuals liquidating their personal collections is not infinite. If you wait 8-10 years to start collecting, you may find prices are very different.

> Maybe when all the old Pulps hit Kindle I’ll start buying them.

Sadly, that’s not likely to happen… it would be almost impossible to get the digital rights to all the stories, interior artwork, ads, non-fiction and cover art for each issue. The only way to collect these old issues is the old fashioned way.

> I was lucky enough to have all of the Astounding issues from Jan 1950 through December 1970 (yes, it morphed into
> Analog during that time) and so read a lot of great novellas, including the ones you show.

Ah! You were lucky indeed. Someday when I retire, I’d love to start a reading project, and read through a year or two of digest Astoundings. It would be a delight to read all those early tales by Anne Mccaffrey, Bertram Chandler, Clifford D. Simak, Frank Herbert, and so many others in the pages in which they first appeared.

For the fantasy counterparts, you may like Legends and <Legends 2, edited by Robert Silverberg, which collect new fantasy novellas set in well-known settings (Earthsea, Westeros, Pern) and written by the original authors.

John, and the illustrations! Freas was my especial favorite, but all of them really enhanced the tales for me.