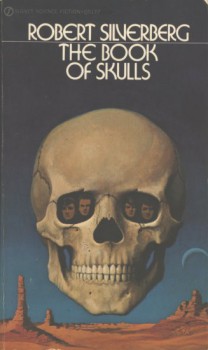 This novel came out in 1972 under the Signet Science Fiction imprint, which is quite misleading. There is nary a hint of sci-fi in its pages. Rather, The Book of Skulls is a deeply compelling psychological study, a book full of mystery and existential dread.

The story is told by four narrators: Eli, Ned, Oliver, and Timothy, Harvard college students who are the book’s protagonists. Each of the forty-two chapters is prefaced by the name of one of the four, the narrator of that chapter, so we are constantly shifting among the four minds. We get four strongly delineated perspectives as the story unfolds through their cross-country road trip to their ultimate goal: an ancient mystery cult in the Arizona desert that may possess the secret to physical immortality.

Eli, we learn, came across The Book of Skulls during one of his forays into the rare and uncatalogued manuscripts section of the university library. Translating it, he discovered the bizarre claim of the Brotherhood of Skulls, that they can forestall death. Further translation revealed that to become an initiate into their secrets of immortality, four candidates must come, a four-sided Receptacle. But part of the demand of the initiation is that two of the four must die: “The Ninth Mystery is this: that the price of a life must always be a life. Know, O Nobly-Born, that eternities must be balanced by extinctions. As by living we daily die, so then by dying we shall forever live.”

Eli has talked his three roommates into going with him in search of the cult over spring break, and each has his own motives for going along, which are gradually revealed as we get into their heads. 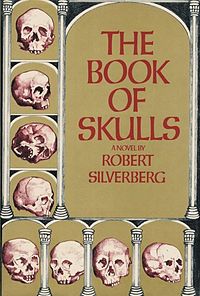 Eli is a Jewish city boy, a brilliant philologist who is full of self-doubt, but has the passionate desire to believe in something outside himself. Defying rational twentieth-century science and materialism, he persuades his friends to take a leap of faith with him.

Ned, an aspiring poet, is a homosexual and a lapsed Catholic. He revels in playing the role of devil’s advocate, and I couldn’t help but recall something his gay-poet predecessor Walt Whitman wrote: “Do I contradict myself? / Very well then I contradict myself, / (I am large, I contain multitudes).”  Ned, in fact, tries to practice the contradiction or paradox of believing and disbelieving simultaneously, maintaining a bizarre dichotomy in his head, scoffing at the whole idea of the Brotherhood of the Skulls while also opening his mind to entertain the possibility.

Oliver comes from a humble Kansas farm-boy background, but he is driven, determined to defy death, which claimed his father and mother at an early age. Though he appears to be a quiet, handsome jock, he possesses the most brilliant mind of the four, a mind that got him off the farm to Harvard on a full scholarship, and which now compels him to find the Brotherhood and pry from them their secrets.

Timothy is the American aristocrat, his family name going back through eight generations of distinguished gentry. He plays along as a lark, part of his self-assigned programme to observe how “other folk” live. But he is a hedonist at heart, and will find this adventure is no longer much of a lark when they reach their destination… 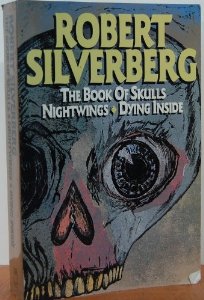 All four characters deal with varying degrees of doubt and belief, and each must wrestle with the ramifications of the Mysteries of the Book of Skulls. What if it turns out to be true? What if two of us must die, one — according to the Ninth Mystery — at his own hand, and one at the hands of the others? Would I be the one to commit suicide for the sake of my friends? Would they turn on me and make me the sacrificial victim? Would I turn on them?

Silverberg displays an impressive understanding of human nature here, illuminating dark recesses in the civilized minds of well-educated men, providing insight to the deepest existential motives that drive us. He manages to evoke many permutations of the fear of death and the love of life, encapsulated in the image of the skull: symbol of death, lying just below the skin of our living face. It is a mind-bending book, and well worth a read. If it had not been pigeon-holed with its genre label, it may well have garnered more of the recognition it deserves, as a work of literature that is deeply contemplative yet also a page-turner. Coming out of the era of Vietnam and love-ins, it is a timely and timeless meditation on the root motives — the most primal desires and profoundest fears  — that compel us all.

Oz gives The Book of Skulls 4 out of 5 skulls.

Next Week: Weird of Oz begins an epic “occasional” quest to review all 50 issues of ARAK, Son of Thunder!