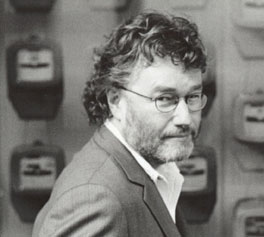 Iain M. Banks, the Scottish novelist who — almost uniquely — created parallel careers as both a bestselling literary author and a top science fiction author, died yesterday at the age of 59, two months after announcing he had terminal gall bladder cancer.

Iain Banks burst onto the literary scene in 1984 with his first novel, The Wasp Factory. It was both a critical and commercial success, listed in 1997 as one of the top 100 books of the 20th century, and it allowed Banks to become a full-time writer.

I heard a great deal about The Wasp Factory when it was first published, but it was his first science fiction novel, Consider Phlebas (1987) that really brought him to my attention. It was the first volume of his popular The Culture series, a sequence of ten books set in a far future civilization run by intelligent machines. Consider Phlebas and the volumes that immediately followed — The Player of Games, The State of the Art, and Use of Weapons — were much read and discussed among my small circle of friends in Ottawa.

He won the British Science Fiction Association Award twice, in 1994 for Feersum Endjinn and 1996 for Excession. He was nominated for the Hugo Award in 2005 for The Algebraist.

His last novel, The Quarry by Iain Banks, is scheduled for publication later this month, on June 20.

He’ll be greatly missed. I’ll never forget a review I read once of The Wasp Factory:
“This is one of the best books I have ever read. It is not recommended.”

My life’s ambition is to get a quote just like that for my own work. What a guy.

That’s a great quote! And it doesn’t dimish my interest in reading THE WASP FACTORY one bit. 🙂

Banks never seemed to get the attention in the US that he deserved, I remember having to hunt down copies of his books on ebay ten years or so ago, many of which were UK editions. And you’re saying he never even won the hugo or nebula? — data point 1,250 for not taking either of those awards seriously anymore.

Banks was tremendous; wickedly imaginative and imaginatively wicked. You can spot his voice and sensibilities across both his lit fit and sci fic, he didn’t compartmentalize them, didn’t seem to adopt a new writing persona or really even look at them as all that different. I’ve liked everything of his I’ve read, and loved more than a few, and reread a few of those more than once. He should have had more time, but it’s amazing what he was able to accomplish with the time he had.

And that is a fantastic quote, Peadar.