Robert Silverberg practically introduced me to science fiction. His novel Collision Course was one of the first SF novels I ever read, and he’s one of the first authors I collected. Like a lot of Campbell-era SF, Collision Course is about humans thrusting out into space in an aggressive age of empire-building, and our first encounter with an equally aggressive alien race with the same dreams. The copy I read was the 1977 Ace edition with a cover (by an uncredited artist) that casually gave away the ending.

Ace Books, run by Jim Baen and publisher Tom Doherty, was Silverberg’s paperback publisher in the US for many years. By the 80s, however, Silverberg had been lured over to the Bantam Spectra line under Lou Aronica. Bantam pulled out all the stops for Silverberg, reprinting much of his vast backlist with gorgeous new artwork by Welsh artist Jim Burns. My collection includes over a dozen Bantam Silverberg’s, including his Majipoor novels, Gilgamesh the King (1984), To Open the Sky (1984), and many others,

But it was only a few months ago that I discovered that Bantam produced two omnibus Silverberg collections in 1988. It was purely by luck, as I was hunting down a copy of Downward to the Earth, and instead found a seller offering something called Three Novels: The World Inside, Thorns, Downward to the Earth for just $3. I quickly searched around and found there was a least one earlier volume, collecting The Masks of Time, Born With the Dead, and Dying Inside. I expect they had very low circulation, because I’ve never seen them before.

They’re also hard to find. At least in the places I usually search, anyway, which include bookstores, conventions, and online. They’re a particularly tough find online, although to be truthful I don’t know if that’s because copies are scare, or because of a totally different issue: these books don’t have titles. Or, they do have titles, but they’re inconsistent, and in the former case, the title is just a mash of all three novel titles.

Weird, I know. Try doing a search on “Three Novels” on eBay. Good luck with that.

The good news is that, while they’re next to impossible to find, they’re surprisingly inexpensive. Although it took a while to find that first volume, I eventually bought an unread copy on eBay for under $5. Which means I was able to find essentially new copies of two nearly 30-year-old paperbacks, both for less than cover price. That’s pretty extraordinary. Good hunting for these ones, my friends.

Of course, if you can’t find the omnibus editions, you can always track down the original Bantam paperbacks. You might want to do that anyway; they’re handsome devils. Here’s the first three, all published in July 1983, April 1984, and March 1984, respectively. All three covers are by Jim Burns; click for bigger versions.

All three under one cover makes a stellar omnibus. This is some of Silverberg’s most acclaimed work. The Masks of Time (Ballantine 1968) was a Nebula nominee, the collection Born with the Dead (Random House, 1974) contains three novellas, including the Hugo nominee and Nebula award-winning title story, and the classic Dying Inside (originally published in Galaxy in 1972) was nominated for virtually every major award the genre offers, including the Nebula, Hugo, Locus, and Ditmar. It won the 1973 Campbell Memorial Special Award for Excellence in Writing.

In a 5-page introduction, Silverberg offers some perspective on what he was trying to accomplish with these books.

What I tried to do at the time when I wrote the two novels and three long stories that this book contains, between 1967 and 1973, was to approach the material of science fiction with the same sort of high seriousness of purpose that the “mainstream” writers I most respected — Conrad, say, or Faulkner, or Hemingway, or Joyce — would have applied to their material. That is, I tried to step away from the pulp magazine traditions in which science fiction had too long been encased, and to deal with such well-worn science fictional subjects as telepathy, immortality, and time-travel as if they were new, handling my themes as intensely and as honestly as the authors of Lord Jim or Portrait of the Artist or The Sun Also Rises or Absalom, Abaslom had dealt with theirs.

It was a chancy thing to do in a field where writers are dependent for their livelihoods on their popularity with readers in search of light entertainment. Someone who had just gone to see Star Wars and now wanted to find a science fiction book that would provide the same sort of easy good-natured fun was not likely to be pleased with Dying Inside or Born With the Dead… There are no slimy monsters here, no spaceships, no glamorous princesses, no sword-swinging heroes, and if those are the things you want science fiction to provide for you, I recommend in all kindness that you put this book back on the rack and search for something else.

Hopefully, not too many readers put the book back on the rack. Bantam followed up a month later with the second omnibus (which had a title, sort of). Three Novels contained the following three novels, published in March 1983, August 1983, and February 1984, respectively (covers by Jim Burns, click for bigger versions).

There’s an intro for this one too. This time Silverberg chatted a bit about each book.

Thorns, the earliest of them, attempts all sorts of things, but basically it tries to demonstrate the impersonal capriciousness of the universe by focusing on two characters who have been oddly victimized by future high-technology societies. Suppose, I say, a spaceman far from home falls into alien hands… and they do alien things to him. And suppose, I say, that a young woman on Earth is used in a fertility experiment that makes her, while still a virgin, the mother of a hundred simultaneous children…

In Downward to the Earth, written a few years later after a visit to post-Colonial Africa, I offered the hypothesis that the supposedly beast-like inhabitants of an alien world might, in fact, have mental capabilities far beyond those of human beings, though to us they seemed to be nothing more than odd green elephants. If this is the case… then what emotions would a former colonial officer experience when he returned to Belzagor and found himself being initiated into the deep mysteries of the creatures he had so underestimated?…

The World Inside is more obviously technological science fiction. I propose a civilization a few hundred years hence that lives in thousand-story-high skyscrapers that house close to a million people each: whole cities within a single building… what would life be like in such an urban monad? What social structures would develop among people who spent all their days within a gigantic high-rise? What conflicts would exist in such close quarters, and how would they be resolved?

Here’s the back cover for the omnibus editions.

And for completests, here’s the back covers for Born With the Dead and Dying Inside (I don’t have a scan of the Bantam edition of The Masks of Time, but I’m working on it.)

And The World Inside and Downward to the Earth.

Bantam had many more Silverberg titles in their catalog, and could easily have filled out several more omnibus editions. Here’s a snap of a few, taken from my collection. 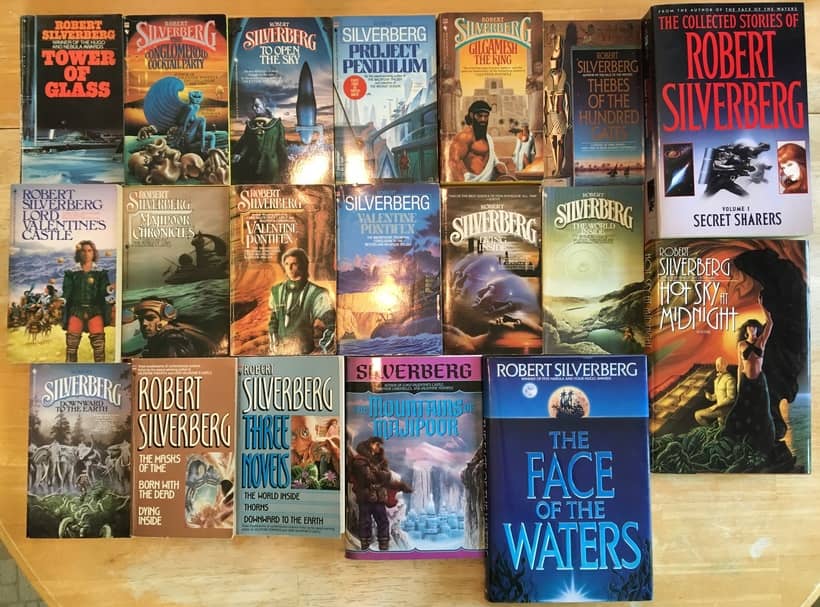 However, these are the only Bantam omnibus editions I could find.

Readers looking for more Silverberg in compact collected volumes are urged to check out The Collected Stories of Robert Silverberg, Volume 1: The Secret Sharers (Bantam, November 1992 — see photo above right), and Other Dimensions, a 2003 SFBC omnibus of four novels (The Man in the Maze, Nightwings, Up the Line, and Dying Inside). 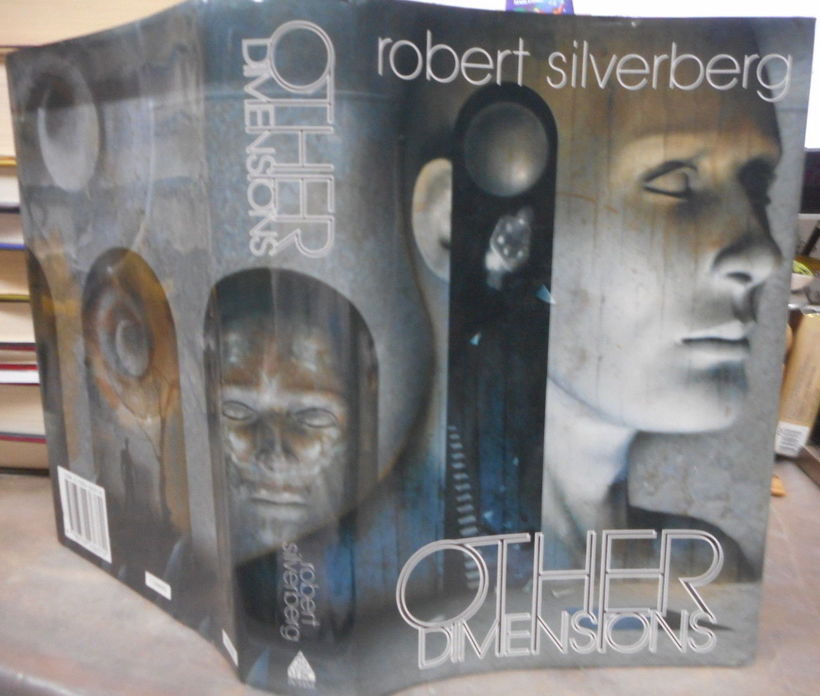 As well as Edge of Light, a 1995 5-novel omnibus from HarperCollins containing A Time of Changes, Downward to the Earth, The Second Trip, Dying Inside, and Nightwings. 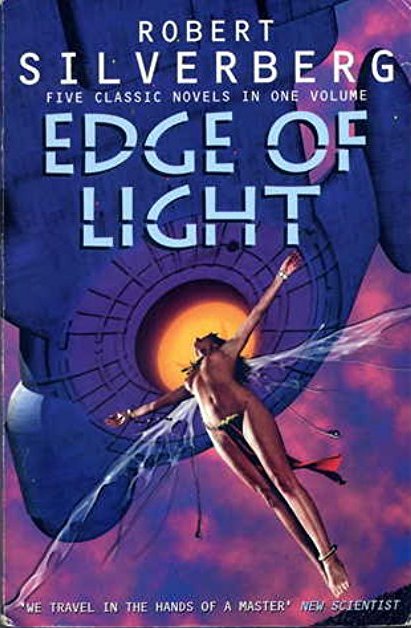 As far as the nominations, Silverberg often had multiple works nominated for the same category and I think he withdrew some so as not to compete against himself. For instance, _TWI_ was up against his own _A Time of Changes_, which won the Nebula, so he probably wanted to maximize his chances of that getting the Hugo, too.

I’m not much of a Silverberg “collector” as I’ve only (for some values of “only”) got 24 Silverberg books. Almost all are Avon, Ballantine, Berkley, or Signet. I have one Fawcett Crest (_The Stochastic Man_) and one Pocket (_Shadrach in the Furnace_). My Majipoor books are in various hardcovers (some SFBC).

I also have one Warner, _Beyond the Safe Zone_, which is another truly fantastic omnibus, containing _Capricorn Games_, _The Feast of St. Dionysus_, and _Unfamiliar Territory_, which are three of his best collections, gathering the vast bulk of his 70s stories (except the three novellas in _Born with the Dead_ and the things fixed up into _The World Inside_ and a few other pieces).

The only Bantams I have are _The World of a Thousand Colors_, _Tower of Glass_ (a 1983 with different cover art from your 1980) and, like yours, _To Open the Sky_, _The Conglomeroid Cocktail Party_, and _Secret Sharers_. Those last two get you almost all the 80s stories.

(BTW, is HTML of any kind allowed in these comments? Or some way to italicize stuff?)

And that’s a pretty impressive Silverberg collection, even if only includes a few Bantams. 🙂

(Although I routinely find much larger Silverberg lots — 50 volumes and up — on eBay.)

And yes, you can use HTML tags to put text in bold or italic in the comments. Try it!

Thank you very much for the HTML information. 🙂

[…] You Got It! (Black Gate) No Slimy Monsters, No Princesses: The Bantam Spectra Omnibus Robert Silverberg — “It was a chancy thing to do in a field where writers are dependent for the […]