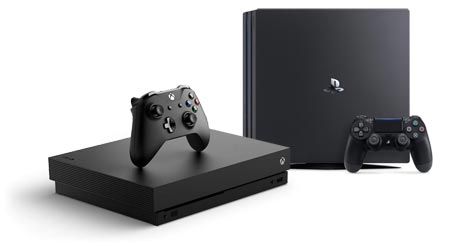 “War, war never changes.” It’s a quote that opens the Fallout series of video games, and is often used to describe the video game console business.

The console wars, it’s been called. Since the first video game console, the Magnavox Odyssey, many different companies have entered this war. Each competing for games enthusiasts time and money. Each promising to be the absolute best console to experience the joy of playing, and to increase player immersion in the game.

The Xbox One X and the PS4 Pro are both successors to the original consoles released in 2013. These new consoles contain technical enhancements in processing power, additional RAM, and graphical capabilities. Due to the pace of technical advancements in TVs, console makers are trying to keep pace.

These new consoles are specifically targeted at displaying games in 4K, the newest TV standard. 4K TVs are approaching price points that an average buyer can afford, and the video game console industry is always keen to match these enhancements.

Microsoft and Sony spent much of their conferences touting the ability for their newest consoles to display games in 4K. The 4K narrative was heavily remarked on by both companies, and both displayed game trailers tailored to that narrative.

At the 2017 E3 Microsoft Conference, Microsoft revealed the Xbox One X. Originally code named Project Scorpio, The Xbox One X is, according to Microsoft, the “World’s Most Powerful Console”. Microsoft stated that the console underwent 3 years of engineering, and that the focus on creating the console was power, compatibility, and craftsmanship.

Microsoft also talked about the importance of compatibility. All current Xbox One titles can be played on the Xbox One X. It will upgrade each of those games with better visual fidelity, anisotropic filtering, and faster load times. Even if you don’t have a 4K TV, the Xbox One X will greatly improve how your current Xbox One games appear on a 1080p TV. 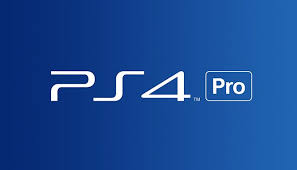 At Sony’s 2017 E3 Conference, Sony focused its presentation on games, and specifically games being released in 4K. Since the PS4 Pro came out last year (November 10th, 2016), Sony did not speak about the console itself. Sony stated that one out five PS4’s sold is a PS4 Pro. Most sales figures have the Playstation 4 console (regular and Pro) outselling the Microsoft Xbox One by about 2:1. Sony stated in June that it had sold 60 million PS4 consoles over the past 3.5 years. Sony also has a very robust library of first party games: Horizon Zero Dawn, Nioh, Bloodborne, Uncharted, and more.

Unlike the Xbox One X, the PS4 Pro does not include a 4K Blu-ray player. For Ps4 owners, watching a Blu-ray 4K disc will require buying or using a different device. However, with 4K streaming content on the rise, the lack of a dedicated 4K Blu-ray player may not be a problem.

The Xbox One X handily beats the PS4 Pro in power. It has a more powerful CPU, GPU, and more RAM. This should translate into better looking, better running games. Any consumer looking for the newest and most powerful console created might be drawn to the Xbox One X.

However, Microsoft’s advantage in power may not translate into substantially better graphics. Running both consoles side by side may not lead to a user being able to make a visual distinction between the two.

The PS4 has certain advantages in the marketplace. Sony has, by far, the most first party, console-exclusive games. It has also sold nearly twice as many PS4s. Most adopters to these new consoles may choose to stick with the ecosystem they are financially invested in. Another advantage the PS4 has is its price point. The PS4 Pro costs $100.00 less than the Xbox One X.

The Xbox One X and the PS4 Pro are both very powerful consoles. They will both most certainly provide a fantastic environment for games enthusiasts. Given their trailing position in the market the stakes are a little higher for Microsoft, but with their dedication to quality they may pull closer to PS4 in the newest console war.

Matt Drought lives in Milwaukee. His last article for us was Delivering on the Promise of a True Open World: The Legend of Zelda: Breath of the Wild.

Buy no Game Console under a year old.

A little play on an old phrase from years back.

I love video games. Won’t go “P.C. Master Race” here, I have a pile of consoles I put aside and have to keep most games off my PC -though I have a big Steam library- to get any writing done… Heh, P.C. as in “Personal Computer” that’s the one form of P.C. I don’t hate with a passion…

But I buy used a few years after the release.

I’d learned – the hard way – several times buying a new system you pay a premium price and get all the bugs, hardware failures and glitches – then you have cheaper games, improved systems and the next upcoming stuff waved in your face. My fav is the Nintendo DS XL… Bought that the day it came out for the new Castlevania games and a KORG music simulator. Played it a lot – actually took it on the road on a bus trip to visit Dad in CA – but within a year the battery started failing and due to Nintendo’s distribution monopoly couldn’t find another, save some dubious 3rd party things with 1 star on Amazon that cost more than the system. Now I could get an alternative battery cheap, but lots of frustration.

By contrast I bought my PS1, PS2, PS3 used by at least 2 years after console release and regretted nothing. I actually semi-broke my rule and bought my PS3 a little earlier for “Dragon’s Crown” and to dabble in the “Souls” series of games. Also I have an Xbox one – great games – but like $40 for a pile and the console – that compensates for the crash. Not going to the 360, even used, RROD-Tan – heh, google that image:-)

I probably will buy a PS4 for Bloodbourne – watched tons of YouTube videos but spent the money in commissions for my artist to do images for an upcoming novel. Since it’s set in the 18th century, did put in some light ‘hyper gothic’ imagery, nothing imitating I’d thought of the story well before that game was on the drawing board but love stuff like that being mainstream can turn up the fantasy and exaggeration a bit. Lots of jokes between me and the artist I commission about spending/earning enough to buy a PS4 but not wanting it to take all our time to write/do commissions.

So far a PS4 probably is worth it for:

1 – Bloodbourne, Odin Sphere – I think through backwards compat should try Dragon’s Crown. Souls games are awesome but huge commitment for difficulty.
2- The ability to use it as a YouTube, Netflix, etc. widgit for your tv, though a cheap Chromecast does that also if you don’t want to play games.
3 – YouTube is neat, lots of audio books, videos on art and creativity you can watch – beats looking in a catalog, paying a premium and having it poke you in the eyes.

I’d be against an X box for:

1 – the CRASH. Really they brought the CRASH to the Console market, as if making it accepted in the PC market wasn’t abomination enough. The one “Chink in the armor of the P.C. Master Race” now also in X-Box technology.
2 – DRM big brother… Look up their patent on having the camera monitor the room. Forget Big Brother looking for you to be writing ‘down with big brother’ even if you are a proletariat boob you’ll still hate them. They wanted to have software built in so if you rented a movie or watched it on an existing subscription it would monitor the people in the room and if it detected more than 4 or 5 either A. Block the movie and put up an embarrassing “You need to pay for more license…enter credit card #/info with joypad…” in a room full of people you’d invited over B – lock out the console – C – call da Fuzz for an “Illegal, underground Theater”…
3 – lots of other creepiness drm and otherwise, look it up.

So, one man’s opinion, if you want a console – A – wait a while – B – buy Playstation C – avoid the Microsoft console to punish them for negative behavior. Some games to look up – Dragon’s Crown, Odin Sphere, Bloodborne, Souls, Salt and Sanctuary, Hyper Light Drifter, Shantae ½ Genie Hero…

Bucking the power trend, I have to say, the Switch is the best console on the market right now for certain people. Yeah, it doesn’t have the library of either the PS4 or One yet (but Zelda, Arms, Splatoon 2 are a hell of a starter), but man, for a busy person with a family, or someone who really likes local play, it’s a godsend. We play Mario Kart at work daily, and at night I can squeeze in some Splatoon rounds or a little bit of Zelda. Absolutely love that thing.

I have to admit that, of all the hardware I’ve seen and heard about over the last 12 months, the Switch is the one I find most intriguing. Maybe my kids will get me one for Christmas….