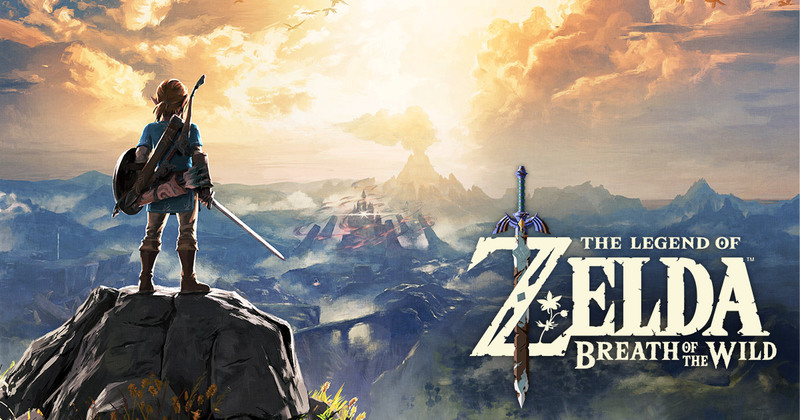 The Legend of Zelda series is one of the most iconic video game series of all time. Nintendo has continually released new iterations since the launch of the original in 1986. Each new release brings with it new concepts, new art, new and interesting twists on game mechanics. Every release stands on its own; each feels like a completely new and different game.

The newest iteration of The Legend of Zelda series is subtitled Breath of the Wild. The game is commercially available on the Wii U and Switch. It opens with a familiar Legend of Zelda story: A great evil has taken over the world of Hyrule and you, Link, the legendary hero, have been resurrected to fight it. This fight however, isn’t yours alone, as you will meet many different characters who will offer assistance in battle against the great evil, Ganon.

The game begins with Link awakening in the Shrine of Resurrection, bereft of his previous memories. You have spent the previous 100 years in the Shrine of Resurrection. You are given a Sheikah Slate and clothes. Once you leave the shrine you are shown a large open world, filled with mountain peaks, rivers, fields, forests, and an imposing volcano. The camera pans over and shows you a crumbling temple, with a mysterious and mystical figure, waiting for you.

The Legend of Zelda: Breath Of The Wild

The picture above is one example of the grandeur you will experience while you wander Hyrule, exploring, discovering, and fighting. Nintendo has created a distinct visual style, one I would call cel shaded full motion video. The animations are smooth and the open world vistas are beautiful. The world appears to be vast and unpopulated, but you will find challenges and discoveries every few steps.

Breath of the Wild features an ability that has been missing in open world games. It is simple but powerful: the ability to climb anything. As long as your stamina holds out, and it’s not raining, you can climb almost anything. Rain makes the surfaces slippery, causing you to continually slip. This breaks a long standing tradition in open world games, invisible walls and unreachable areas. This key ability has an incredible impact on your gameplay, freeing you from constraints, allowing you to explore to your heart’s content.

Adventuring in Hyrule leaves no shortage of things to do and see. Early on you will gain the paraglider, which greatly enhances your ability to move through the world. You will discover shrines that will offer up one of two trials, a puzzle that you must solve, or a combat trial. Upon completing the trial, you are rewarded a Spirit Orb. Koroks are hiding all across Hyrule waiting for you to find them. After finding them you will be rewarded with a Korok Seed. Towers are found around the map, and climbing them opens up new portions of the map. Horses can be tamed, ridden, and checked in and out to a local stable. 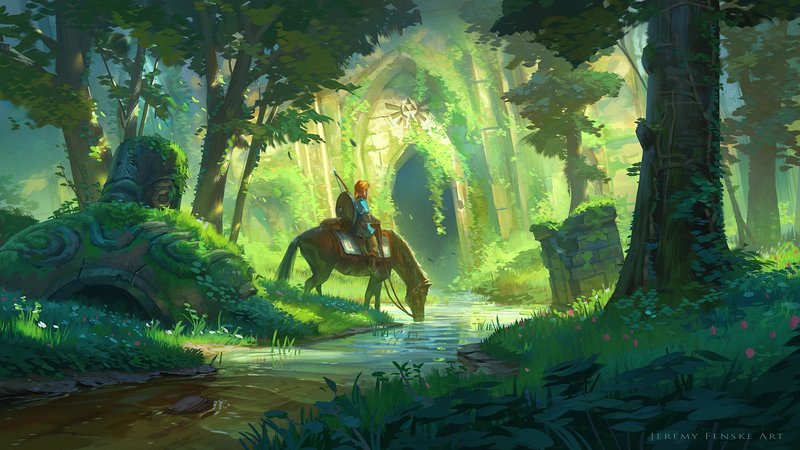 The game includes elements of survival, forcing you to be wary of your surroundings and creating your own health and status effects. You will find many types of ingredients such as vegetables, meat, and plants. You will also gather monster parts like moblin horns, bokoblin guts, and Lizstalfo tails. Cooking these in different combinations will provide you with health and status benefits, such as resistance to cold.

You will also need to be wary of the temperature, as different parts of Hyrule have different climates. Equipping the right gear for these areas is very important. One quick tip on environmental dangers: unequip any metal weapons, outfits, and shields during a thunderstorm. Getting zapped by lightning is almost certain death.

Combat is one of the most satisfying game mechanics in Breath of the Wild. It is fluid and fast, allowing you to attack in a manner of different ways. Each combat opportunity affords you a vast array of options on how to approach the fight, and how to execute it. There are many instances where you will see an unconventional method to destroy or damage your enemies, and once you try it, you will be pleasantly surprised with the results. 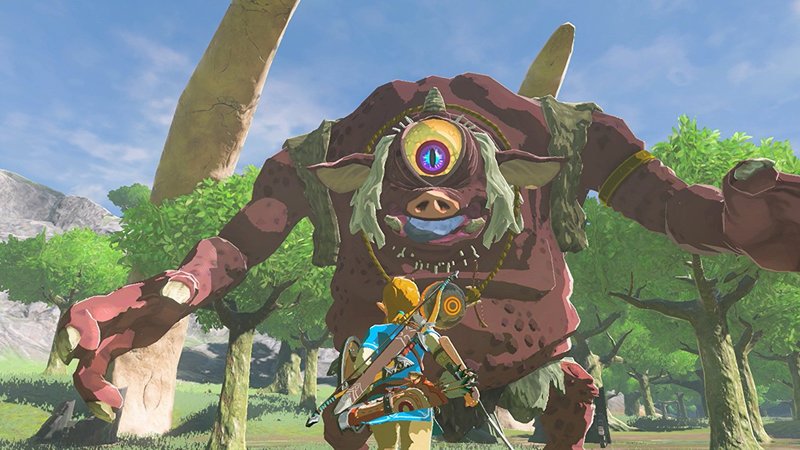 The price of combat is weapon degradation. Every weapon you gain will wear out and break (except for the Master Sword). When a weapon breaks, it disappears in a brilliant flash of light, and is no longer in your hand or inventory. This forces you to switch to a new weapon to continue the fight. If you have a favorite weapon, or a powerful weapon, you might find yourself hanging on to it longer, only using it when you have no other options.

The game provides a great many weapons to gain or pick up, so it will be rare for you to be short on weapons. These applies to bows and shields as well. The variety of weapons is impressive, from short swords to staffs, large clubs to boomerangs, all with varying power levels.

As in past Zelda games, you acquire different gear that can be used in different situations. The Shiekah Slate is one of the most important pieces of gear that you have. At the beginning of the game you gain runes that are inserted into slots on your Sheikah Slate. These Runes grant the powers of Magnesis, Remote Bomb, Stasis, Cryonis, Camera, and Amiibo. These powers can be used for combat, solving puzzles, and blowing open rock sealed caverns. The Sheikah Slate also acts as a camera, binoculars, map, and inventory control device.

The game controls exceptionally well. The developers put a lot of thought into how Link responds to the controller. The controls are responsive and intuitive, allowing the player to move through the game smoothly, without having to memorize a ton of different button combinations. 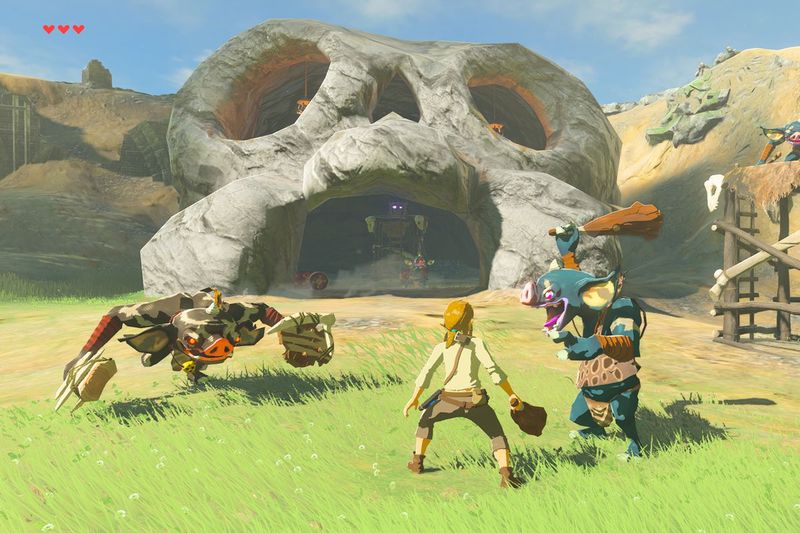 However, the game absolutely makes up for any of its flaws with the sheer amount of things you experience while playing. It is littered with exciting and dangerous moments and battles. Moments such as encountering Hinoxes, 10 times your size, slumbering. If you choose to wake them, you will begin an epic fight. If you are spotted by a Lynel, a centaur, they will viciously pursue you, forcing you to tax your skills to the limit to survive. You can sneak through a Bokoblin camp while they are sleeping and steal their treasure. You will find Wizards named Wizzrobes, dancing in the air, disappearing and reappearing to launch magical attacks at you. Make no mistake, you will certainly become acquainted with death. You will die, a lot.

Even so, Breath of the Wild will leave you wanting more. The breathtaking and often surprising exploration, the satisfying combat, the plethora of weapons and gear, all will entice you to return to Hyrule to continue your journey. Breath of the Wild delivers on the promise of being an incredibly engaging open world experience. Within a few days of release, The Legend of Zelda: Breath of the Wild was touted as a front runner for Game of the Year. The game is available on the Nintendo Switch and the Nintendo Wii U.

Matt Drought lives in Milwaukee. This is his first article for Black Gate.

I only read about half of your article for fear of spoilers. But this game really has delivered on most of the fronts so far.

I started with the original legend of Zelda on the NES and I’ve played most of the games in the series. A Link to the Past has always been the high point of the series for me. i love the exploration and how big the world feels. Breath of the Wild does most of the things that ALttP does, but with a modern feel.

I’m only about a third of the way through the story, but that’s because I can’t stay on track. I just keep going off and finding new areas.

I don’t play that many video games anymore. But this one really has me hooked.

Really, not just Skyrim but there have been tons of MMORPGS, MUD’s, MUCKs etc for decades now. “Open worlds” are hardly anything new. The only thing – relatively – new is the “Sandbox” where you can play without purpose, versus big quest/goal driving the thing, but again go back to various Muds, Mucks, MMORPGs…

I borrowed a work friend’s switch with this on it – it did kind of remind me of Skyrim – with a handful of wild mod’s and custom characters.

A large, open world, based on a classic video game series… In abstract it’s neat, though just as sidescrolling platformers to 3d how to keep the feel of the original. The article did sum this up, there’s a big epic quest but how to keep it up in such a wild open world. Like Skyrim – you could run through the main quest in a week of evenings easily. But fun to run around and play. Like Starbound had to keep it OFF my computer after a crash and a purchase of a new system…

There’s a neat game out there it’d be neat if this site reviewed – “Axiom Verge”. Essentially “What Metroid should have been” mixed with the “Flashback” series. Very good science fiction with horror elements.

Has a scientist getting killed when his lab explodes on him, then he’s ressurected inside some kind of pod in this bizzare alien world that might not be in this reality – lots of beautiful (but non-sexual) biomechanoid computers and H.R. Giger inspired imagery – and evidence of a frightening holocaust of the living inhabitants – then things get really weird…

The reason I’m putting this up here is the classic games share a common element; backtrack and exploration to open up more of the map – usually through obtaining keys and/or more powerful weapons or abilities. They did this for a reason – limited memory. The Atrari game Adventure was done in less memory than you’d see in a thumbnail today. It was actually because they didn’t have the memory for a text adventure like “Colossal Cave” the percursor to “Zork”. When the NES came along they had more area, but it was still unthinkably tiny by today’s standards. Since (unlike the 2600) they could now access more memory than in the computer’s Ram capability they could make seemingly big maps but again they ran out of space for graphics alone pretty quick. Thus they folded the map on itself to make an engrossing adventure feeling that rewarded exploration and experimentation.

This lead to some criticism – mostly from the flood of imitators – the “First gun, useless after first boss” – the “gathering dust in inventory” key – so forth.

Skyrim is definitely one of the greatest games ever. Zelda is also great, in much different ways than Skyrim. I will work on writing about Axiom Verge, I played it and loved it. It is a more than worthy successor to the original Metroid games.