Last month I rented a booth at the Windy City Pulp and Paper show here in Chicago — my favorite local convention — and piled it high with brand new hardcovers and trade paperbacks I was giving away. I had 31 boxes of leftover review copies, duplicates from my collection, and hundreds of rare advance proofs to get out of my basement, and this seemed like the perfect opportunity. Bob Byrne and Steven Silver made long drives to the con to help staff the booth, and we were looking forward to handing out books to grateful attendees.

Reality was a little bit different. Most folks passed by our booth with barely a glance. If Bob and Steve and I hadn’t been tirelessly peddling books, handing out free copies as people passed by, and carting books by the dozens to the freebie pile at registration every few hours, we’d probably still be there. This was an audience more interested in pulps and vintage paperbacks than brand new science fiction and fantasy, apparently.

It’s not true that there was no interest in our booth. After eight long hours unsuccessfully giving away books on Friday, Dave Ritzlin from DMR Books joined us on Saturday, and we gladly made space for him in the booth. Once we did interest picked up immediately, as folks zeroed in on his attractive selection — and especially his new releases, The Sapphire Goddess: The Fantasies of Nictzin Dyalhis and The Thief of Forthe and Other Stories by Clifford Ball.

Folks who’d passed by our booth multiple times did a double-take and came right over. There was a great deal of excitement from people who picked up the books, and I heard more than one enthusiastic attendee thank Dave for being the first to put together a collection of Nictzin Dyalhis’s fiction. Nearly 80 years after his last story appeared in Weird Tales, Dyalhis still has an enthusiastic following, especially among pulp fiction aficionados. 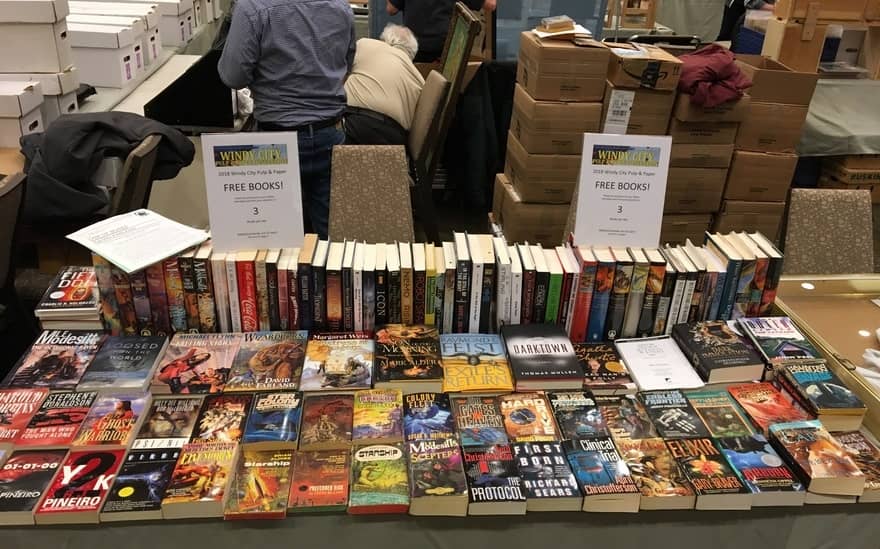 The Great Black Gate Book Giveaway at Windy City 2018.
Note the 30 additional boxes behind the booth, waiting to be given away

It’s obvious that Dave read this audience far better than I did. While the rest of us in the booth struggled to give away free books, Dave did a brisk business, selling both his his two new collections and his backstock, which included three Swords of Steel swords & sorcery anthologies, and back issues of his magazine Scrolls of Legendry.

Here’s the details on the latest from DMR Books.

The Thief of Forthe and Other Stories by Clifford Ball

After the death of Robert E. Howard, Clifford Ball was the first writer to follow in his footsteps and pen sword and sorcery stories for Weird Tales. For the first time ever, all of Ball’s stories are collected into one volume. A must-have for pulp historians and fans of fantasy, horror, and weird fiction! 206 pages.

The limited edition “classic size” version (6.5″ x 4.25″) of this title is available now. Trade paperback and digital versions will be coming later this spring.

At last, the stories of one of the most unusual writers of weird fiction are collected! This volume contains all of Nictzin Dyalhis’ works of fantasy and science fiction, many of which have never before been reprinted. Those who love the wild imagination and masterful prose of authors such as Clark Ashton Smith and C.L. Moore are sure to enjoy this collection. 388 pages.

The limited edition “classic size” version (6.5″ x 4.25″) of this title is available now. Trade paperback and digital versions will be coming later this spring.

Our previous coverage of DMR Books include:

I will be happily getting both of those!

Although I do feel compelled to point out that Wildside did a digital-only Nictzin Dyahlis megapack a few years ago that has at least some overlap with the DMR collection.

I love those covers. Went to DMR site to try find more details but nothing more there. They are so classic pulp. Whomever did them “bailed it”. Working with the assumption they are modern retro art and not originals?

I think the covers are by Margaret Brundage and Virgil Finlay.

Yeah, the signatures are visible for both covers.

Yes, the cover art originally appeared in Weird Tales. Thief of Forthe was in the July 1937 issue (cover by Finlay) and Sapphire Goddess was February 1934 (cover by Brundage). You can’t see them on the website, but the back covers have Weird Tales cover art too.

“The Sapphire Goddess” has three stories that were missing from the Wildside megapack. It’s also a physical book and has Brundage cover art, so I think it’s got a lot going for it.

I read the Wildside collection a few years ago and enjoyed it, although several of them were more stories of 20s & 30s occultism/spiritualism than sword & sorcery or adventure fiction.

Is there much more uncollected Dyalhis fiction out there?

Dyalhis only wrote four stories that weren’t included in “Complete Fantasies”: two westerns and two crime/detective stories. According to an essay in Echoes of Valor III, there are also three unfinished fragments, but who knows what happened to those.