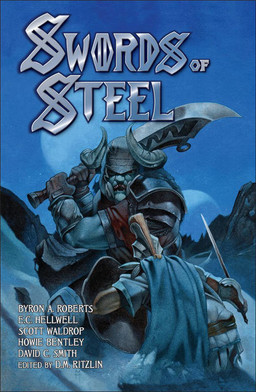 Swords of Steel is a brand new sword & sorcery anthology edited by D.M. Ritzlin, filled with stories written exclusively by heavy metal musicians. In his introduction, David C. Smith says the “idea was to create a collection of the kinds of stories you would have found in the late 1960s and 1970s — in the Swords Against Darkness anthologies, for example.” I’m a fan of Andrew Offut’s Swords Against Darkness, and I heartily approve of any effort to recapture their spirit.

Swords of Steel is an anthology of fantasy/horror adventure stories; it  includes interior illustrations and maps by a variety of artists, and poems by Sean Weingartner. There’s also an artilcle, “Headbanging Warriors,” by Black Gate‘s Thursday blogger  M Harold Page.

Mighty-thewed barbarians… vengeful lords of chaos… desolate devil-haunted ruins… carnage-soaked battlefields… forbidden spells of great power… All of these you will find in the works of authors of heroic fantasy as well as heavy metal musicians. But modern fantasy has been plagued with convoluted plots and series without end. Who better to return traditional fantasy to its former glory than the heavy metal bards?

Swords of Steel is an anthology of fantastic and horrific adventure stories, each penned by a heavy metal musician. Members of such bands as Bal-Sagoth, Manilla Road, Twisted Tower Dire, Cauldron Born, Solstice, and more — proving their talent for the written word as well as song — cut through the modern wasteland, wielding Swords of Steel.

Swords of Steel was published by DMR Books on February 21st, 2015. It is 254 pages, priced at $9.99 in paperback. There is no digital edition. The cover is by Martin Hanford. Visit DMR Books at their Facebook page here.

How did I not hear about this already? Sheesh!

Hi Fletcher — They were kind enough to send us a review copy. Say the word, and it’s yours.

Yes, please. I would very much like that copy.

That is a really, really excellent cover… however, I’m confused, is that the same guy that did the “Where’s Wally” books?

Woo-hoo! An S&S anthology. Come into my shopping cart, my sweet.

Bal-Sagoth’s lyrics and concept were amazing…it’s a very good new to see that Byron it is still alive and kicking.
I love Manilla Road as well, but I’ve never heard of this Hellwell guy…if it’s not a nickname for the Shark, I guess it is someone from the Hellwell side-project

I’ll put it in the mail for you today.

> I’m confused, is that the same guy that did the “Where’s Wally” books?
> if not, where’s this guy’s website?

No, the Where’s Wally guy is Martin Handford. Martin Hanford has done work for Games Workshop, and not a few album covers. I couldn’t find a website, but there’s a list of his work here:

And a Wikipedia page here:

Black Gate » Blog Archive » The Forging of Swords of Steel

Thanks for the interest, everyone. To address a few points: Martin Hanford’s website is: http://martinhanford1974.deviantart.com/

As for E.C. Hellwell, he and Mark “The Shark” Shelton have been friends since high school. E.C. played bass on the Manilla Road album “Playground of the Damned,” and also started the Hellwell project with Mark. His story for this collection, “The Riddle Master” was actually written before the Manilla Road song of the same name, and was the inspiration for that song.

[…] John O’Neill posted a few weeks ago about Swords of Steel, edited by D.M. Ritzlin, I knew I had to read it. The hook […]

[…] The cover this issue (titled Berenice) is by artist Martin Hanford, who has been commissioned to do all the 2015 covers. Click the cover for a bigger version. If the style looks familiar, you probably saw Hanford’s art just yesterday in our New Treasures piece on Swords of Steel. […]