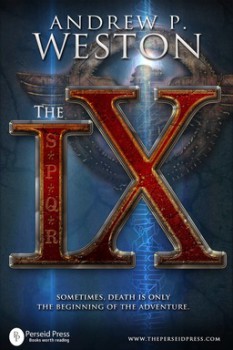 Are you old enough to remember the Kirk Douglas Saturday Night Live sketch from 1980 that asked the important question: “What if Spartacus had a Piper Cub?” Well I am, and it was the first thing that popped into my head when I received a review copy of Andrew P. Weston’s new novel, The IX, from the fine people at Perseid Press. I don’t read or review much sci-fi, but they suspected, quite correctly it turns out, that this would be right up my alley.

No, modern aviation doesn’t save the famous Roman IX Legion from destruction. Instead, the IX — and a host of other soldiers from across the ages — get a chance to play with advanced weapons to stave off a massed army of energy-devouring monsters on a star far across the galaxy from Earth.

The Ardenese, a highly advanced race, rule dozens of worlds, crossing the stars in ships that rip holes in space…until they encounter an enemy they come to know only as the Horde.

First discovered on a colony world, the energy-devouring Horde manage to secrete themselves aboard Ardenese starships. One by one the colonies fall, until all that remains is the homeworld and the capital city, Rhomane.

Even protected by barriers and nearly impregnable walls, the Ardenese know they are doomed. In the end, and it is surely near, they will all die, subject to the hideous ravages of the Horde. To ensure the survival of their race, the handful of survivors turn their fates over to the Architect, a massive AI computer.

The plan it devises involves the storage of millions of packets of genetic material and the deaths of the survivors to power a spatial and temporal gate to draw on soldiers from a small blue and green world. The Architect will pluck soldiers from that world just as they are about to die and bring them to Arden. There they will be given a second chance at life provided they lend their war-making talents to the destruction of the Horde.

The Architect has been bringing humans to Arden to fight the Horde for nearly a decade between the prologue and the first chapter. That’s where we meet the first inductees into the latest draft: the IX Legion. Most famous for its mysterious disappearance from the historical record around 120 AD, in Weston’s novel the legion and many of the Celtic tribesmen about to wipe it out are caught up in the Architects’ gateway.

At the same time (in Arden), a troop of American cavalrymen and a confederation of Plains Indians from 1860, along with a British SBS team and the terrorists they were trying to take out in 2052, are also whisked across the galaxy, away from certain death. On Arden, foodstuffs and other supplies are nearly depleted. For reasons I’ll leave you to discover, these three groups represent the last hope for the survival of any sort of Ardenese legacy as well as for all the other soldiers ever transported to fight the Horde.

Sometimes science fiction exists to debate weighty ideas and theories, as in The Left Hand of Darkness or Stand on Zanzibar. Sometimes it’s about playing games with perception, like in most Philip K. Dick stories. This time it’s about taking on endless waves of mindless energy-vampires with guns, mini-singularity bombs, and a host of other assorted death-dealing apparatuses.

The IX is a whole bunch of fun. I admit I don’t read that much science fiction these days. I find a lot of it, even the more space opera-ish stories, too somber or serious. I’ve started on a 19th century Russian literature reading kick this year, so somber and serious are things I need a little break from. The IX has taken me back to some of the books I enjoyed in my youth, such as Jerry Pournelle’s King David’s Spaceship or Gordon Dickson’s Hour of the Horde (where humans are drafted into a galactic war against a horde of space weasels!).

The novel is not without its weaknesses. It suffers from the occasional Tom Clancy-like fascination with gadgetry and the need to explain it in copious detail to the reader. Weston knows his stuff. He served in the UK Royal Marines and was a police officer. I’d prefer, though, to take his word for it and skip some of the descriptions. It brings a ton of bricks down on to the stage, breaking the flow.

And that’s irritating, because much of The IX flows wonderfully. There’s constant motion, whether by parties exploring the abandoned countryside and facilities of Arden, or scouring through old records to find anything of importance that might help them eke out a victory. With faltering resources and the emergence of a heretofore unseen intelligence guiding the Horde, Rhomane’s defenders know they must move to win quickly or face extinction.

Weston’s prose is at its best when the members of the IX Legion or the Horde are on stage. His legionaries are just as I’ve envisioned Roman soldiers: stolid and ready to make whatever sacrifice is needed in order to protect those they’ve sworn to serve. Admittedly it’s a romantic notion, but Weston sells it well.

He also does a very good job conveying the alien nature of the Horde and their domain. All the humans, no matter where and when they’re from, are still human. The Horde are something utterly strange and monstrous. Weston does an admirable job of making them unfamiliar and unnerving. 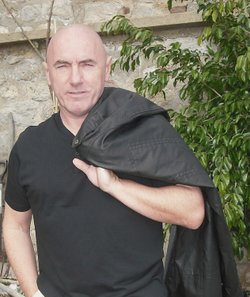 There’s a lot more in The IX that I’m not mentioning at all. Weston took the story in a few very unexpected directions that were intriguing and fun. Because of that, the book could actually serve as the jumping off point for a series of new stories. If that happens I’d be very interested to see what he does next.

A lot of military sci-fi gets glib at times, or ends up making a whole lot of political points. Even when I agree, I generally don’t enjoy being subjected to a political diatribe. Neither of those things happens in The IX. Weston keeps things clean and simple and focused on his heroes and their dilemma.

So, if you’re in need of some fast-paced storytelling, lots of action, and an army of characters drawn from Earth’s past and future, The IX should serve you well. It’s available at all the usual places in paperback and e-book.

Fletcher, thanks for your fine review of The IX. I know that Andy Weston, the author, will be delighted.

Thank you. Definitely took me back to my younger days reading Dickson, Anderson, and the like.

Thank you so much for the review Fletcher. Much appreciated. Black Gate is an awesome venue, and I can breathe a huge sigh of relief knowing I’ve created a world that will draw the reader in…

Thank you so much for your review. I enjoyed it very much. The IX is a phenomenal story and kept me intrigued the entire time.

I think this is an excellent review. I read the book and found it to be an excellent story. It kept me reading, that is for sure. Anyway, good job on the review!

@Andrew – You’re quite welcome. It’s a lot of fun with a nice bit of world building, both things I look for in my sci-fi reading these days. Glad to read you’ve got more books planned for the IX world.

[…] of the savage Picts. My love of all things Wagner, my fond memory of The Road of Kings, and my review of The IX last week (a sci-fi take on the legion’s disappearance), combined to make me grab […]

Congratulations, Andy, from all of us at Perseid for coming up #11 in Black Gate’s March list of most popular features. – JEM

It’s a great story, cleverly written and complex. Here’s my review (I can’t believe it was a year ago!). https://libraryoferana.wordpress.com/2015/04/09/review-ix-andrew-weston-sci-fimilitarytime-travelhistorical/

Thank you all. I hope to extend the universe in ways that keep you entertained 🙂