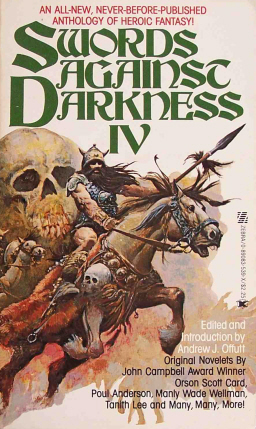 Andrew J. Offutt, who authored many fantasy novels in the 70s and 80s, and who made a significant contribution to Sword and Sorcery as an editor with his seminal Swords Against Darkness anthology series, died yesterday.

But I first encountered him in Swords Against Darkness IV in 1979, a marvelous book which contains stories by Manly Wade Wellman, Orson Scott Card, Poul Anderson, Tanith Lee, and many others. The first Swords Against Darkness appeared in 1977 from Zebra Books, with a Robert E. Howard fragment completed by Offutt, a Simon of Gitta tale from Richard L. Tierney, and fiction from Poul Anderson, Manly Wade Wellman, David Drake, Ramsey Campbell and many others. Offutt edited a total of five volumes, with the final one appearing in 1979. Together with Lin Carter’s Flashing Swords anthologies and a handful of small press magazines like Weirdbook, Swords Against Darkness kept Sword & Sorcery alive throughout the 70s and into the early 80s.

Offutt went on to some success with collaborator Richard K. Lyons, beginning with the War of the Wizards trilogy (1978-81). He also wrote the War of the Gods on Earth trilogy (1979-83), but was mostly known for his Robert E. Howard pastiche novels featuring Conan and Cormac Mac Art, including The Undying Wizard (1976), The Mists of Doom (1977), and Conan and the Sorcerer (1978). He was a noted contributor to Thieves’ World, appearing in several volumes in the ’80s and ’90s.

Offutt had a long hiatus after his last Thieves World work appear in 1993. He returned briefly to the field in the last decade, contributing a short story co-authored with Richard K. Lyon for 2009’s Rage of the Behemoth from Rogue Blades Entertainment.

Altogether Offutt wrote and edited more than 75 books. He also contributed to the field in other ways, including two terms as president of SFWA, from 1976-78. He died yesterday at the age of 78.

Hanse Shadowspawn was fantastic, and as I said, I’d just read Thieves World two weeks ago and one of Andrew’s stories inside. I was saddened when I saw this news as the creation he helped make is a founding principle in what I attempt to do on a daily basis.

Sorry to hear the news. I really do need to go back and read all of the SAD anthologies.

Indeed, Hanse Shadowspawn is a character that will live forever in my memory.

He was a huge part of my formative years as a reader. Definitely need to revisit his work.

The Swords Against Darkness anthologies are some of the best collections of sword and sorcery out there. I love every worn out, dog eared copy I own. Andrew Offutt will be missed.

I don’t know that I’ve read anything of his other than the Shadowspawn stories (pretty much the best of TW), but his son Jeff was at times my prof, teammate and competitor. A good man, which reflects well on the father.

The Swords Against Darkness books are really what anthologies should aspire to. Reading them really helped jumpstart me to blog about S&S. Really one of the genre’s giants.

This is sad news indeed.
I enjoyed this series and his Conan novels very much! 🙁

> Hanse Shadowspawn was fantastic, and as I said, I’d just read Thieves World two weeks ago and one of Andrew’s stories inside.

I was surprised and pleased at the high level of interest in my post on the THIEVES WORLD boxed set last week. 30 years on, THIEVES WORLD is still a very popular topic.

I’d love to see your thoughts on those early books here, if you’re interested. You know the first rule of publishing: give the readers what they want!

> The Swords Against Darkness anthologies are some of the best collections of sword and sorcery out there.

I just saw a comment from Steven Silver in another thread, pointing out that Offutt bought Charles de Lint’s first short story for SWORDS AGAINST DARKNESS. Another credit to his talent as en editor, I think.

> his son Jeff was at times my prof, teammate and competitor. A good man, which reflects well on the father.

Well said. I’ve heard a bit about Jeff Offutt, all good. How was he your competitor?

> The Swords Against Darkness books are really what anthologies should aspire to. Reading them really helped jumpstart me to blog about S&S.

Thanks. Where did you blog about S&S? You can’t drop a hint like that and then not share. 🙂

Over at a site pompously called “Swords & Sorcery: a blog” – http://swordssorcery.blogspot.com/

I’ve heard a bit about Jeff Offutt, all good. How was he your competitor?

John, teammate in softball, competitor in racquetball. After one game he said, “You may be better than me, but in ten years I’ll still be able to walk.” This was followed by an hour-long conversation in which he dispensed solid wisdom on school and life. (I also toned down my game and ten years later sent him a thank-you note because I could still walk.)

In class he once said, “Let’s take a random number,” and wrote 42 on the board. After a few seconds of letting the class react–half chuckling, half confused at the chuckling–he said as an aside, “It’s amazing what you can tell about people just by writing a number on the board.”

Thanks for the link! I checked it out, and enjoyed your review of GONJI, and BENEATH CEASELESS SKIES. Like you, I’m glad to see that magazine get some attention.

You should do a guest blog for us some time.

Sounds like an intriguing guy! What did he teach?

Software testing and verification was his specialty at the time, and that was the only class I had with him.

I should add Jeff was a fledgling prof at the time, so that was probably the only gradual level course he taught while I was there.

Thank you. I’d love to. Let me know when/what, etc.

[…] Next up is a name that should be a lot more familiar to Black Gate readers: celebrated fantasy author and editor Andrew J. Offutt — who died just last April (read his BG obituary here.) […]