In his review of Swords of Steel II, the second volume in D.M. Ritzlin’s ambitious Sword & Sorcery anthology series, Fletcher Vredenburgh expressed his enthusiastic support for the project.

Metal and S&S have been fist in glove for many a year now. They have the same penchant for extremes — the big gestures not the subtle, small ones. The idea that heavy metal musicians could turn their love for S&S into prose makes perfect sense.

And that’s exactly what D. M. Ritzlin has encouraged, starting with last year’s Swords of Steel, an anthology of heroic fantasy written by members of heavy metal bands. While I gave it a mixed review, I was utterly sold on the idea. The authors’ ardor was undeniable, even overwhelming weaknesses in some of the stories. Each story was illustrated with a work of hand-drawn lo-fi art that harks back to sketches on the backs of D&D character sheets and murals painted on the sides of vans. Flaws be damned, I enjoyed the book and was happy to learn that a second volume was being planned.

Needless to say, we were very pleased to hear that a third volume had been announced. Swords of Steel III, with brand new tales of Sword & Sorcery from eight musicians, new illustrations, and an epic intro from the legendary Mark Shelton (Manilla Road), arrives next week from DMR Books.

A NEW CHAPTER OF STEEL BEGINS…

Just when you thought the dust had settled, the scriveners of arcane metal lore invoke a fresh wave of dark and twisted dreams from worlds beyond our own.

Join a cast of eight writers both new and old including Byron Roberts (Bal-Sagoth), Howie Bentley (Cauldron Born), Mike Browning (Nocturnus), E.C. Hellwell (Hellwell) and many more, PLUS a terrifying host of illustrations and an exclusive introduction by the legendary Mark Shelton (Manilla Road).

Charge into the fray with Swords of Steel III at your side!

Introduction by Mark “The Shark” Shelton (Manilla Road)
“Thannhausefeer’s Guest” by Howie K. Bentley (Cauldron Born)
“A Paean to Mine Wolfen Self” (poem) by Howie K. Bentley (Briton Rites)
“The Pirate Prince of Terran” by E.C. Hellwell (Hellwell)
“The Key” by Mike Browning (Nocturnus)
“The Chamber of Juleptsu by Jaron Evil (Almuric)
“Eldon” by Chris Shoriak (Ice Sword)
“Stormchaser” by Jeffrey Black (Gatekeeper)
“The Scion at the Gate of Eternity” by Byron A. Roberts (Bal-Sagoth) 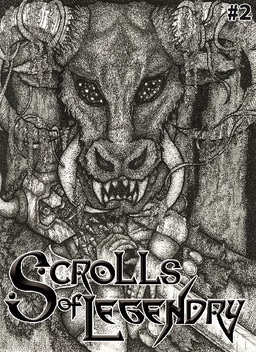 Swords of Steel III will be published by DMR Books this weekend at the Legions of Metal festival. Copies will available online at the DMR store on May 21, 2017. It is priced at $10. There is no digital edition.

Our coverage of the previous volumes includes:

Read more and order copies directly from the DMR website.

I haven’t read any of these, but should since I’m a bit of a metalhead (just bought my Metallica ticket this morning!)

But man I really, really love those covers. The first is the strongest, but the other two are great too, and I love the use of different primary palettes on each one.

I’m a huge fan of DMR Books having read everything they’ve put out to date. Thanks for the notification on this one!

> man I really, really love those covers. The first is the strongest, but the other two
> are great too, and I love the use of different primary palettes on each one.

I agree completely. I didn’t really notice until I put all three books together, but the bold colors look terrific side by side, and each cover stands out. Kudos to the designer.

> Thanks for the notification on this one!

You’re very welcome. Let us know what you think of the third one!