October brought another nice batch of heroic fantasy magazines to my electronic doorstep. Among them were regulars Swords and Sorcery Magazine and Heroic Fantasy Quarterly. A newcomer was the old-school paper-and-ink fanzine, Scrolls of Legendry (two issues in fact) from the hands of Swords of Steel maestro, Dave Ritzlin.

I am not sure I have ever heard mention of Swords and Sorcery Magazine outside this column or the blogs of the authors it publishes. While it hasn’t the professional look of Heroic Fantasy Quarterly or Beneath Ceaseless Skies, its commendable dedication to the genre deserves respect and recognition. For nearly five years now, Curtis Ellett has published two new stories each and every month and for that I am very grateful.

Issue #57’s first story is shy on swordplay, but heavy with poetical sorcery. “Ephemera” by David Bowles depicts a magical contest between a Mexican princess and a Japanese monk. In an alternate timeline, Japan has been conquered by the Aztec Empire. The story occurs during the celebration of Tanabata, the Star Festival. The event is a showcase of powerful Aztec magic, held in order to deter encroachment by the Ming Empire and inspire the inhabitants of Nippon.

The Mexica princess surged unexpectedly to her feet. “In the right hands, with the right tools, poetry can quite literally move the soul. But that is just the beginning, dear imperial subjects. My ancestors, too, had their secret sorceries. At the dawn of this age, when the newly formed sun struggled to leave the horizon, the Feathered God led all the other deities to bleed themselves in sacrifice, giving movement to that diurnal light. Blood, you see, is concentrated teotl.”

From her skirt, she drew forth a long maguey thorn and pierced the index finger of her right hand. As blood welled, a darker red than anyone could credit, Macuilxochitzin smeared calligraphy down the inside of her left arm, raising it for all to see.

“A thousand orange blossoms / fall upon their heads.”

Materializing from nowhere, mandarin flowers showered down on the crowd. The people, though they had heard of such deeds before, were struck dumb with astonishment, simply stretching out their hands to catch the white petals.

While not a heroic fantasy story by any stretch of the imagination, I enjoyed “Ephemera” very much. Bowles writes well and conjured things that will stay with me for some time, I am sure.

“Cursed and Beloved” by James Lecky, #57’s second story, is a full-throated blast of heroic fantasy. Tomas, torn and bloody, stumbles into the sanctuary of an abbey. There his wounds are treated and his life saved. How and why he is wounded is later revealed and the possibility of violence surfaces. Tomas appeared previously in the equally good and brutal “But the Dreams of Men.”

I’ll say no more about this short bit of savagery, save that it is about a man looking to salvage some part of his soul in a harsh world. Lecky delivers the tale with his usual sharp style and hard realism about the weight of violence. 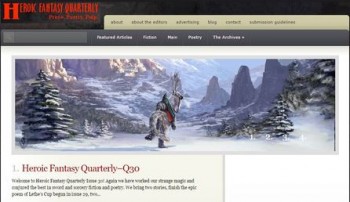 Heroic Fantasy Quarterly #30 kicks off with the conclusion of Cullen Groves’ epic poem, “Lethe’s Cup.” I’m still digesting this work myself, but I heartily recommend it to any heroic fantasy reader. It summons images of skalds singing in the flickering light of the fireplace before their pagan lord and his household.

The war between the joint forces of pagan humanity and the Elf kings versus their Christian adversaries reaches its terrible conclusion in this final installment. Surprise betrayals, savage heroes, and bloody death — the poem is filled with them. Again, I commend Adrian Simmons and company for publishing this, and Groves for writing it.

The Saxon invasion of ancient Wales provides the setting for Harry Piper’s “The Man in Chains.” Lord Rhaig ap Madog, of Powys uncovers a dark secret that he hopes to turn against his nation’s enemies. In a hidden keep in the wilderness, a man named Falnir, with a mouth full of razor sharp teeth, is kept chained in its dungeon.

“Put me at the head of your armies and I will not only drive these invaders out, but I shall strike back at their country with tenfold the destruction they brought to yours. This I promise.”

Rhaig nodded. “Good,” he said. “Swear loyalty to me and our cause, and I shall set you free.”

“You shall have it,” Rhaig said quickly, eyes flickering to the rest of us. “And in abundance. Only give me your oath, and quickly.”

Falnir’s head swivelled to us, then back to Rhaig. He smiled.

“Are they still ignorant? Ah, but they will learn, won’t they?”

This story rises above its fairly predictable plot by the power of Piper’s terrific writing. His portrayal of the narrator’s mood from hope to fear to terror is pitch-perfect.

Martin Rose’s  “Eyes Or No Eyes” is a story of betrayal and devotion. When the preeminent knight of the realm, Aislinn, is blinded during a joust, perhaps due to actions of Prince Ryne, the court wizard saves her life, if not her eyesight. The wizard serves as the tale’s narrator and his insights into Aislinn’s, Ryne’s, and his own reactions to the disastrous joust, and what effect it has on the kingdom, forms the main body of the story. There’s a subdued brooding nature to the story, as well as a degree of sorrowfulness that sneaks up on the reader from unexpected quarters. A curious story that I liked and that I think I need to reread, and that I recommend you.

The final story in HFQ #30 is from editor Adrian Simmons’ own keyboard. The “Seven Moves on an Ordulk Board” refers to maneuvers on a game board, which is how the boy Muriq approaches the evil entity he encounters on the slopes of the Forbidden Mountain. In a time of privation, plague, and war, while hunting on restricted lands along the slopes, a voice in his head offers him favors in return for human sacrifices.

Muriq is too clever to simply accept the offer or the attendant risk, and begins to bargain his way down. Instead of men, he finds out what the sacrifice of a dog will get him. No such deal, though, can ever be simple and clean, and Simmons has a feel for the dark deals we make with ourselves in order to survive or get what we want. As he showed in his earlier story, “The Siege, The Gums, and The Blue,” he is willing to take his stories all the way to their most logical and bleakest conclusions, and he does the same thing here.

As usual, there are regular, non-epic-length poems in HFQ #30. The first is “Garuda’s Gamble” by Colleen Anderson, and the second’s “The Night Before Yule” by Daniel Stride. Read them and decide for yourself. Me, I liked them. 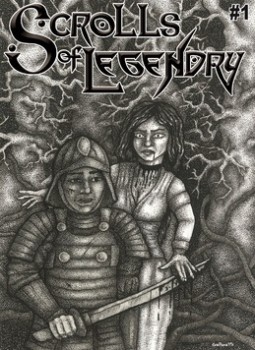 So, when Dave Ritzlin asked if I’d take a look at the two issues of Scrolls of Legendry, I agreed at once. I may not have loved every story in his two Swords of Steel anthologies (click on I, and II for my reviews), but man, do I love his and the stories’ various authors attitudes regarding swords and sorcery. Ritzlin and his compatriots are gung ho for old-school, sword-swingin’, limb-chopping, wizard-killing S&S. In other words, I may not know him in person, but he’s my spiritual brother when it comes to this stuff I review week after week.

John O’Neill did a review of the first issue of Scrolls of Legendry last year (I even commented on it, something I completely forgot!), and dug it. I completely concur with that judgement.

Issue #1 has a single story, the Japanese-set “The Heaviest Sword,” by Jeffrey Black. A soldier is regretful and ashamed of the actions of his commander toward the peasants of a small village. His sympathy is not enough to save him from the horror unleashed by his commander’s crimes. Decent, mean bit of storytelling.

The bulk of the slim, 15-paged ‘zine are Ritzlin’s reviews of a variety of new and old S&S works. My favorite is of Master of Etrax (1970) by Robert Lory which includes this tart line:

The book is like an Eyes of the Overworld from an alternate universe where everything is stupid.

Issue #2 follows the same format: a bunch of reviews and single story. Again, the reviews are of a mix of new and old, with an emphasis on the forgotten and missed. The funniest review, which I can not repeat here, is a two-word scatalogical description of Norman Spinrad’s attack on heroic fantasy, The Iron Dream.

This issue’s story, “The Howling God” by Paul Batteiger, is simple and bare-boned. Umor, a war-chief, takes a band of warriors to hunt down and kill the king of their most hated enemies. To do this they must follow him into dangerous and unknown lands:

So, battle-weary and blooded, I gathered my best companions and rode north, away from the battle, following the trail of the escaping giant thanes and their fallen war-lord. On battered horses, in our rent and dented armor, with swords already notched from killing, we rode into the eternal forests, where the Hrunar dwelled in secret places, and the wilderness belonged to Karaunos, the Howling God.

No man had set foot in those lands; they were a place of terrors and legend.

Both issues are good fun and worth your three bucks. I’m hoping he puts out a third issue in the near future.

As for all the other stories this month, those are free, so you’ve got no excuse to not read them. And read them you should.

Thanks for the review of HFQ 30! Glad that you liked it. ‘Lethe’s Cup’ was a bit of a risk– it has a very specific appeal– but it was far too awesome to let go.

‘Eyes or No Eyes’ is one of those stories that is in the realm of S&S, but kind of on the edge of it.