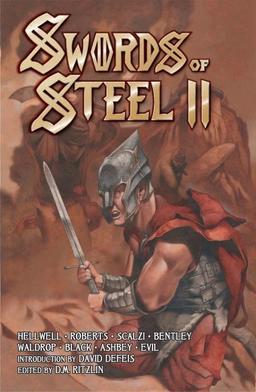 When John O’Neill posted a few weeks ago about Swords of Steel, edited by D.M. Ritzlin, I knew I had to read it. The hook was simple: swords & sorcery stories written by members of metal bands. Tons of heavy bands — Uriah Heep, Iron Maiden, Manowar, Metallica, Megadeth, to name several — have drawn on the themes of heroism, monster-fighting, and sorcery for lyrics and look… Ritzlin set out to recreate a 1970s-style anthology akin to Lin Carter’s Flashing Swords! or Andrew Offutt’s Swords Against Darkness, and has succeeded.

I’m very pleased to report that a second volume is in the works, to be released next month. I asked Dave for a quote, and here’s what he told me:

The Swordsmen of Steel return! Attacking once more now with twice as much strength, the most epic practitioners of the heavy metal arts fill another volume with tales of terror and heroic adventure. Swords of Steel II features stories by such artists as E.C. Hellwell (MANILLA ROAD), Byron Roberts (BAL-SAGOTH), Mike Scalzi (SLOUGH FEG) and Howie Bentley (CAULDRON BORN). A total of eight stories (each accompanied by an illustration) are contained herein, as well as two poems and an essay by David C. Smith (author of the Red Sonja and Oron novels). Don’t read this book unless you have nerves of STEEL!

Introduction: Where the Lifestream Touches Eternity by David DeFeis (VIRGIN STEELE)
“The Forgotten City of Tehm” by E.C. Hellwell (MANILLA ROAD, HELLWELL)
“A Voyage on Benighted Seas” by Byron A. Roberts (BAL-SAGOTH)
“That Than Which There Can Be No More Terrible” by Michael Scalzi (SLOUGH FEG)
“The Sword of Shaitan”, poetry by Howie K. Bentley (CAULDRON BORN, BRITON RITES)
“Mystery Believer” by Scott Waldrop (WALPYRGUS, TWISTED TOWER DIRE)
“At the Crossroads: Swords, Sorcery and Heavy Metal”, an essay by David C. Smith
“Beneath Dead Lake” by Jeffrey Black (GATEKEEPER)
“Red Ochre” by James Ashbey (SOLSTICE)
“Vitiated Life”, poetry by Alex A. Avdeev (BLACKSWORD)
“Darke Manor” by Jaron Evil (ALMURIC, ARCHSPIRE)
“The Heart of the Betrayer” by Howie K. Bentley

D.M. Ritzlin is also the editor of Scrolls of Legendry magazine. Our previous coverage of Ritzlin and Swords of Steel includes:

Swords of Steel II will be published by DMR Books on February 27th. It is 182 pages, priced at $10 in paperback. The cover is by Martin Hanford, and depicts a scene from E.C. Hellwell’s story “The Forgotten City of Tehm.” Get all the latest details at the DMR Books Facebook page.

I missed the first book—reason: I read books almost exclusively on Kindle. I suggest they widen their market by making a digital version.

Regarding Wild Ape’s comment: generally I’m all for providing all kinds of formats for people’s preferences, but these days books and stories are more likely to come digitally with no print format being made available. Personally, I prefer print. I find it more aesthetically pleasing, especially reading stories set in a medieval fantasy setting. Reading on an electronic device is a bit jarring when reading fantasy. So, I’ll second Wild Ape and say for all of those digital fiction providers to also offer print versions for readers who prefer print.

I’m an atypical reader these days I suppose, since I don’t buy from Amazon. And I have passed on books that are only available through Amazon–there is plenty of writing out there to satisfy my needs, so I don’t really care if there are some I’m going to pass on.

An introduction written by David DefFeis together with a tale of Byron Roberts (and Mike Scalzi, too)?? I MUST have this one!
Asking for a digital version of a book written by old school metalheads is nonsense (just joking!! :P)

I just heard from Dave last night, and he tells me the book is 182 pages, priced at $10. I’ve updated the entry above.

No word on a digital edition though… you’ll have to gripe to Dave about that!

@NOLAlbert—I’m reading along with Howard Andrew Jones all those Conan stories and following his blog in digital format. To be honest, it still rocks the same. I can understand that setting a mood to a story that many like the old fashioned book. Nothing wrong with that.

I have found that reading a Joe Abercrombie on a Kindle while smoking a Monte Cristo double corona and drinking a stout heightens both the flavor and the read. I highly recommend this. For Harold Lamb you might try a Ghurka Warlord with an IPA beer.