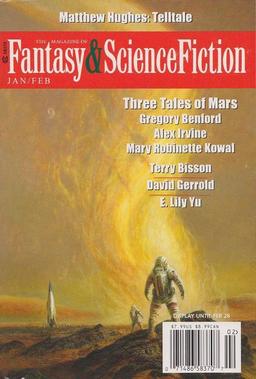 The January/February issue of F&SF is all about the planet Mars — starting with a great cover, titled “Martian Vortex,” by Bob Eggleton. Here’s editor C.C. Finley:

Usually we start with a story and commission a cover for it but when Bob Eggleton sent us the Martian landscape that adorns this issue, we snatched up the illustration and went looking for stories to match. In the end, we found you not one, but three, all of them very different in tone and focus.

This issue is on sale until February 28. We last covered F&SF with the November/December 2015 issue.

Our January Fantasy Magazine Rack is here, and all of our recent magazine coverage here.

Wow. It’s been several years since I let my subscription lapse, but based on the TOC, I might have to pick this issue up.