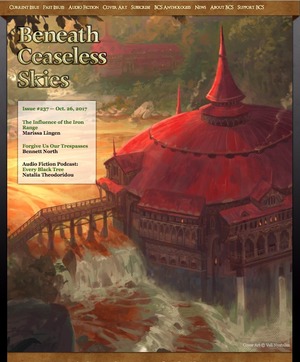 The latest issue of Scott Andrew’s Beneath Ceaseless Skies has been up for less that a week, but Charles Payseur at Quick Sip Reviews already has a detailed review. Charles is routinely a pretty positive guy, but that doesn’t mean he doesn’t have good insights. His thoughtful comments introducing this issue make a fine example.

Whenever I get a new issue of Beneath Ceaseless Skies, my first inclination is to find out how the stories fit together. More than any other publication, BCS does an excellent job of pairing its stories. Perhaps because it does just two an issue, but there’s almost always something to link the tales, and this issue is no different. While the stories are thematically rather distant, and aesthetically fairly different as well (though each with perhaps a bit of a Western feel), they are linked by some key ideas. Metal, first and most. The first story deals with Iron, the second with Silver. And in each, these metals are used for magic, for a perceived justice, only to have that justice come into question, and the righteousness of the main characters comes into conflict with the harm that they do. These are stories of elections and revenge, voice and hunger. The pieces go together well, drawing a picture of desperate people and the complex idea of freedom.

Here’s Charles on “Forgive Us Our Trespasses” by Bennett North, which sounds right up my alley.

This story speaks to me of vengeance and sin, punishment and hunger. It features a main character, a young trans man, searching through a drought-ravaged land for the final member of a gang of cannibal bandits who killed his family and ate his arm. So… you know this is gonna be a cheery read going in…

“The Influence of the Iron Range,” Marissa Lingen

The town bandstand has medallions of iron recently emblazoned to it; in the last twelve years since the Hayes election, all respectable towns have added them to the places where politicians might speak. But those are only enough for the local offices. The mayor, the city council. Any redcap or jenny-greenteeth might slip into one of those positions, were the local election commissioners unwary; might find a way around the medallions.

“Forgive Us Our Trespasses,” Bennett North

My prayers are automatic, the movements worn into my fingers. With each Hail Mary and Lord’s Prayer, I can feel my shoulders tense. I haven’t had confession since I left the convent. Haven’t taken communion. I say my prayers, but when my mouth shapes the words, they come out tarnished. There’s nothing holy in this path on which I’ve set myself. I remember his teeth.

Serah avoids his eyes. “I’ve been pregnant a long time,” she says after a while. “The baby won’t come.”

From the Archives: “More Full of Weeping Than You Can Understand” by Rosamund Hodge (from BCS #53, 2010)

As with Papa, she knew Thomas was gone and felt no regret, for she had changed equally.

This month’s cover, “Riverhome,” is by Veli Nyström. We last covered Beneath Ceaseless Skies with issue #225.

See our Late October Fantasy Magazine Rack here, and all of our recent Magazine coverage here.