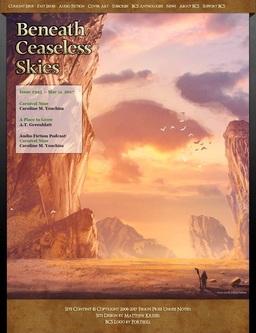 Over on her website, Caroline M. Yoachim talks about her newest story in Beneath Ceaseless Skies.

I have a new story out in issue #225 of Beneath Ceaseless Skies (May, 2017). “Carnival Nine” is a story that I am particularly proud of, and I’m so happy it found a good home. A short excerpt:

One night, when I was winding down to sleep, I asked Papa, “How come I don’t get the same number of turns every day?”

“Sometimes the maker turns your key more, and sometimes less, but you can never have more than your mainspring will hold. You’re lucky, Zee, you have a good mainspring.” He sounded a little wistful when he said it. He never got as many turns as I did, and he used most of them to do boring grown-up things.

Here’s the complete Table of Contents for issue 225.

The train took us to the maker’s bench, and we laid out our son’s body, chest open. Tonight the maker would give him a mainspring and wind him for the very first time. “Should we name him now, or after we’ve gotten to know him?” My parents had waited to name me until my second day, because they wanted to be sure the name would fit.

“A Place to Grow” by A.T. Greenblatt

There was a small, insistent part of her that wouldn’t let her give up so easily. The tiny part of her that had put down roots outside of her uncles’ laboratories and workshops. She’d poured hours into learning how to make things grow, how to keep them alive, and she had succeeded. She could spend an entire day in her garden with Marci and Gil, weeding, watering, laughing and it never felt like wasted time.

From the Archives: “A Spoonful of Salt” by Nicole M. Taylor (from BCS 79).

He tasted of salt. Naomi half-expected to see him melting in the places where her mouth had been.

This month’s cover, “Land of Giants,” is by Ashley Dotson. We last covered Beneath Ceaseless Skies with issue #219.

Thanks Jeff! The link to the podcast is above.